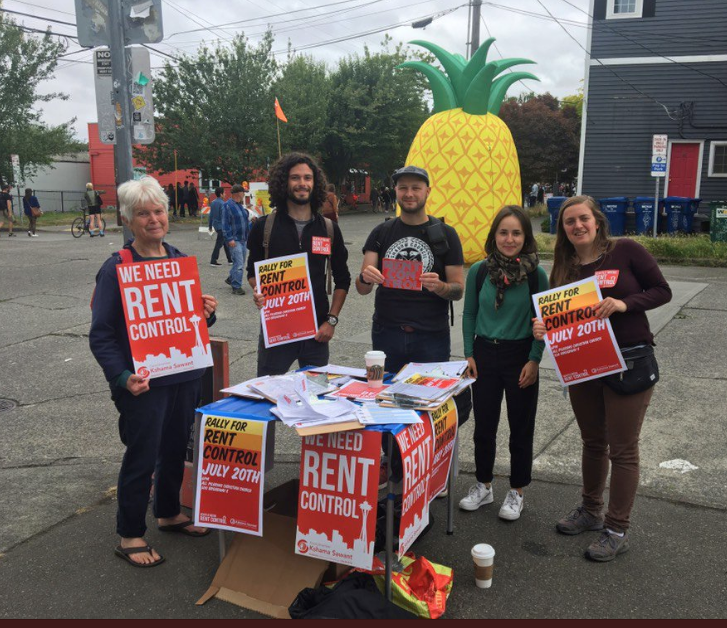 Working-class renters won a big victory in New York in June when the state legislature passed a package of reforms that will benefit 2.5 million people. Most importantly, the measures closed pro-corporate loopholes in state’s rent laws that had allowed hundreds of thousands of rent controlled apartments to be deregulated over the last decades.

The victory in New York has been inspiring to working people across the U.S. This is particularly the case in Seattle, Washington where Socialist Alternative and City Councilmember Kshama Sawant has been fighting for rent control and to expand affordable housing.

“We need to learn the lessons from the victory in New York,” explained Sawant to a group of her supporters in the Central District neighborhood of Seattle. “Make no mistake, the movement won this.”

Sawant is right. It was New York’s Democratic Party Governor Andrew Cuomo who signed the bills into law, but he is no ally of working people. Cuomo, and other Democrats, only shifted their position recently under pressure from the growing anger of working people and mobilization from the left.

This includes the stunning election victory of socialist Alexandria Ocasio-Cortez over establishment Democrat Joe Crowley last June. In September, Democratic Socialists of America member Julia Salazar won a seat in the state senate, while a group of right-wing Democrats (the Independent Democratic Conference) who helped prop up Republican control of the state senate were defeated.

Then, the “blue wave” in the November general election ended decades of Republican control of the state senate. All this weakened the power of the landlord lobby going into the rent laws battle.

But even with Democratic Party supermajorities in Albany, passage of the reforms was not guaranteed due to the corporate character of the Democratic Party and the influence of Cuomo. A key factor was the largest statewide mobilization of housing activists in years. Thousands canvassed, rallied, and occupied legislators offices. It was this effort that kept the pressure on the legislature and inspired Sawant and housing activists around the country.

In a solidarity message to New York activists, Sawant wrote: “Your success will be a huge boost for our movement here.” New York and Seattle have come up in conversation together many times over the past year because of Amazon’s drive for a second headquarters in New York, which ultimately collapsed in the face of widespread opposition. Indeed, many people in New York feared that the Amazon deal would “turn Queens into another Seattle,” leading to rising rents and displacement of working people from the neighborhood.

Amazon’s growth in Seattle over the past decade has coincided with booming corporate development that has pushed rents up faster than almost anywhere else in the country. For the past six years, Councilmember Sawant and Socialist Alternative have helped build working class resistance to this process and have won many victories including the first major $15 an hour minimum wage.

Now things are coming to a head over Sawant’s upcoming re-election effort. Amazon executives and developers correctly see her as their chief enemy in city hall. They have put together over $1 million in corporate PAC money in hopes of unseating her and anyone too far left for their interests.

Against this, Sawant has made rent control one of her key priorities. Her challengers in the primary either oppose rent control, or have hedged on the issue to try and play both sides of the growing divide.

In 2018, Sawant was the only councilmember not included in a secret, and possibly illegal, chat group used by Mayor Jenny Durkin – an ally of business – to coordinate the infamous repeal of the “Amazon Tax” one month after it was passed unanimously on the council. The tax on Seattle’s largest businesses (also known as the “head tax”) would have raised over $40 million for affordable housing annually.

The repeal was a major turning point in Seattle politics that has emboldened the right-wing, Amazon, corporate developers and the establishment.

Key to the success of the repeal was the capitulation of so-called “progressive” Democrats on the council. Their support for repeal was a blow to the momentum for affordable housing and rent control. However, it also helped clarify that wishy-washy progressive politics won’t be enough.

That’s why activists see it as a top priority to defend Sawant’s seat. The Stranger, Seattle’s progressive newspaper, endorsed Sawant and made the point: “Sawant’s pressure continues to make legislation and budgets more progressive. If she’s not in there calling out the bullshit… then Seattle will just regress to patting itself on the back for hating Donald Trump while people continue to die in the streets.”

Even if Sawant wins, winning rent control will be a big challenge. For exactly this reason, Sawant has repeatedly stressed lessons from New York.

Rent control is banned at the state level in Washington. As Curbed Seattle points out: “It’s not just Seattle with rising rents; it’s a statewide issue. The Harvard Joint Center for Housing Studies found that the cost burden—that’s rent in relation to income—is highest in some rural areas of Western Washington, with the most dramatic numbers in Aberdeen, Shelton, Longview, and Centralia’s metro areas.” Renters now make up over 37 percent of all households in Washington State, and nearly half in Seattle.

One of the keys to the New York victory was broadening the organizing of renters across the state, and Sawant and Socialist Alternative understand the need to do the same. Sawant plans to introduce a rent control bill in Seattle that would immediately go into effect as soon as the State government lifts the ban. If passed, the ball would be squarely placed in the court of Democrats who control every level of the state government in Washington, adding further pressure on them to act.

Such a situation would put working people on stronger ground to win “if we fight for it,” as Sawant would say. Toward that end, she and Socialist Alternative have built a growing coalition of unions, progressive groups and socialists. In July, over 300 people attended the first rally.

Sawant and Socialist Alternative are always quick to warn: even if rent control is passed, as long as housing is subjected to the needs of capitalism, working people will have to constantly struggle over housing.

Socialists campaign to replace the for-profit housing market with a democratically planned system that guarantees housing for all. Such a vision requires a national and international struggle, rooted in the organized power of working people, and armed with a program to take the biggest banks, real estate corporations, and multinational developers into public ownership under democratic control of working people.

The growing momentum for rent control has the potential to help prepare the way and activate a new generation of workers into struggle, alongside fights to unionize Amazon workers, win Medicare for All, and build a genuine political voice for working people.

In the U.S., not a single county anywhere has an adequate supply of affordable housing. A 2017 study from Harvard concluded that, after a decade of stagnant incomes and skyrocketing rents, the U.S. has settled into a “new normal” where almost half of all renters are “cost burdened,” paying more than 30 percent of their income on housing.

In Oregon, a modest statewide rent control law was passed last year. A statewide ballot initiative to lift restrictions in California failed last year, but the discussion has continued and there is likely to be another effort to change the laws this year. Meanwhile, there is growing discussion about lifting state bans in Illinois, Colorado, and elsewhere.

While at the local and state level there has been growing momentum, at the national level there is hardly any discussion about providing relief to renters. Up to now the issue has barely featured in debate around the Democratic Party presidential primary.

Bernie Sanders is the only major candidate to come out in support of rent control, along with expanding public housing. Coincidentally, Sanders grew up in New York long before loopholes in the state’s rent laws had deregulated millions of apartments.

While the landlord lobby often uses New York’s experience as an example of how rent control “does not work,” Sanders said in a recent CNN column: “our family was able to afford a roof over our heads, because we were living in a rent-controlled building. That most minimal form of economic security was crucial for our family.”

In reality, it’s capitalism’s for-profit housing system that is failing. The lesson from New York’s recent rent reform victories is that it will take a struggle from below to force the issues of rent control and affordable housing into the spotlight and win.

By electing more socialists like Kshama Sawant, Bernie Sanders and taking steps to unite local struggles in New York, Seattle and across the U.S., we can lay the basis for bolder action to fight for socialist housing policies that put people before profit.

To support Kshama Sawant and the fight for rent control in Seattle, please go to KshamaSawant.org and make a donation today.