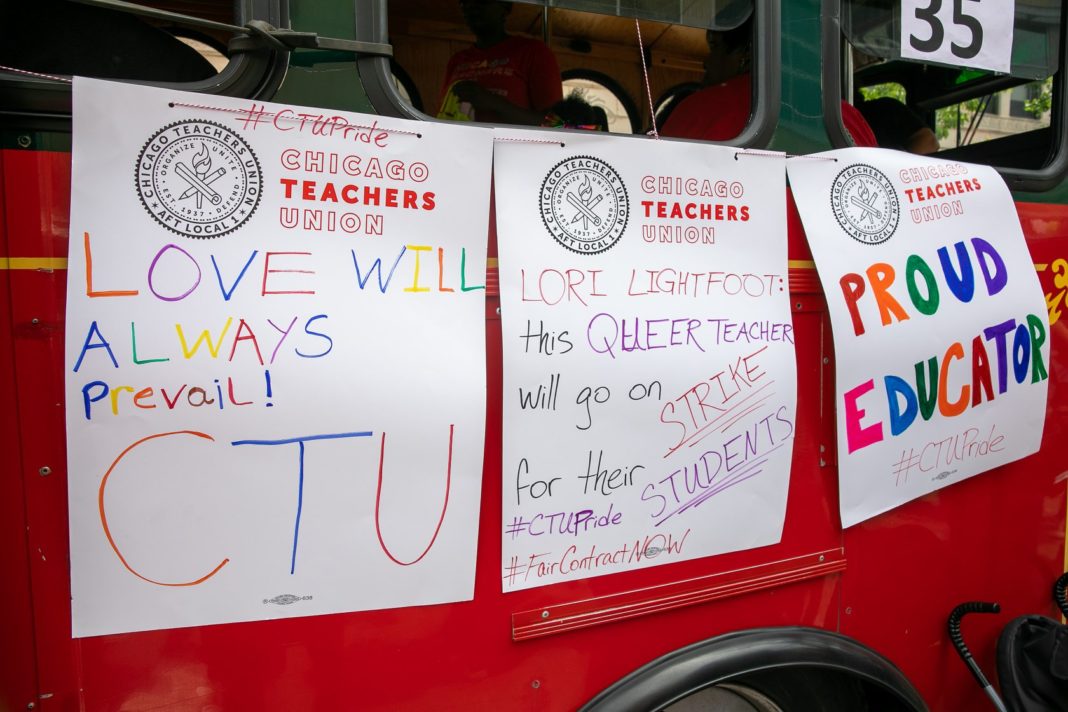 Push for Gains with All Out Public Sector Fight Back

Thirty-thousand Chicago teachers, educators, and Chicago Public Schools (CPS) workers have ended the school year, but their contract fights are heating up. Both major unions at CPS, the Chicago Teachers Union (CTU) and SEIU 73 have filed legal paperwork to allow for strike action in the fall. SEIU 73 – which is comprised of special education assistants, security officers, and custodians – has already passed a strike authorization vote of its roughly seven thousand members – 97% in favor! Due to the trailblazing 2012 teachers’ strike, Chicago is seen as central to the nationwide fight for public education. With the #Red4Ed gains at their backs, a victory in this struggle would continue the momentum of the teachers’ revolt.

While the 2012 strike set back the corporate “education reform” agenda, the political establishment was able to regroup and resume its ferocious attack on public education. Teachers and CPS workers are subject to ongoing abuse by the top-down CPS “Network” bureaucracy. In the schools there is a mood of deep frustration and demoralization over funding cuts and working conditions which, as CTU’s slogan says, are students’ learning conditions. This is especially acute in poor neighborhoods.

Both SEIU and CTU are coming to the table with a suite of strong demands that would improve the lives of educators and students alike. These include enforceable class-size limits, increased staffing, an end to unpaid in-school hours, special education protections, better training, a moratorium on charter expansion, no non-mandatory testing, an end to punitive school-ratings systems and bureaucratic interference, as well as pay and benefits that take all CPS workers out of poverty and grant a decent living in an increasingly unaffordable city. The corporate Democratic establishment has long fought against demands like these. However, if they take a hardline with Chicago’s education workers they will have to reckon with the growing opposition of working-class people to the attacks on public education. Educators can’t wait on the new mayor, Lori Lightfoot, and should be organizing now to take action if necessary.

The larger discussion around education has changed greatly since 2012. In part inspired by the 2012 strike, the 2018 teachers’ revolt initiated in West Virginia has injected a community-based militancy into education organizing. In addition, recent national polls show charter school popularity is on the decrease, with charter teachers beginning to organize and go on strike, including three successful CTU organized charter teacher strikes.

This contract struggle will also pose a test for the CTU Caucus of Rank and File Educators (CORE) leadership and the wider labor movement in the city. To win Chicago’s 2019 education fight will pose the need to escalate the struggle even beyond the CORE-led 2012 landmark strike – to build for a powerful united front within the labor movement and connect this with Chicago working class communities. Preparing the level of struggle that will be necessary to win will be an uphill battle, but once again, CTU has the potential to set an example for the change workers can make if they take action.

Chicago Needs to Get #StrikeReady Against the Democratic Establishment

So far in negotiations with SEIU and CTU, CPS and the mayor’s office have given almost no significant responses on any issue. Their strategy appears to be to delay substantive discussions as long as possible or at least until Lightfoot settles into office.

The mayor is unlikely to simply grant the unions’ demands. Lightfoot has been intentional about taking a positive public approach toward CTU, in contrast to Emanuel’s blatantly anti-union agenda. It’s also likely that she wants to avoid a strike during her first year in office. This may result in releasing some funds for pay and other issues. But the pressure from downtown corporate and financial elites is the same on Lightfoot as it was on Emanuel – to continue to slash the budget for public services to make space for incentivizing profit seeking investment. Therefore, she is unlikely to commit to dramatic funding increases or to give ground on the vicious approach of the Networks and their drive to implement a neoliberal school agenda.

CTU and SEIU have to prepare for successive escalations to overcome this. Given the depth of the problems educators face, we should refuse to settle for half measures or a rotten, Lightfoot brokered “compromise” with big business. To turn the situation in our schools around we need a swath of contract victories and massive funding increases that dramatically improve the daily experience of students and CPS teachers, educators, and workers. It’s likely a strike will be necessary to wrench these gains from the establishment’s hands. A successful strike would also have the effect of inspiring a new generation of educators to action and unionism. Confidence from victories will help build a stronger union that can fight week-to-week in our buildings.

CTU CORE leadership have so far taken few strike preparation steps – like taking a strike authorization vote, holding strike trainings, coordinating demands and strategy with SEIU 73, or having the House of Delegates meet over the summer. And although CORE was reelected in May, teachers report a real lack of rank-and-file enthusiasm for the leadership’s approach. This was also evidenced by a limited turnout of less than one-thousand members to a rally the leadership held in May. Past contract battles have shown that victories are dependent on genuine working-class struggle and unity from below. It is very dangerous for all union members that CTU leaders have more and more looked for short cuts by looking to cut deals with sections of the Democratic establishment.

There is growing dissent and anger inside CORE itself over the direction of the union.  Despite its history of leading the revitalization of the CTU in 2010-2011, CORE as an organization began to stagnate following the election of their slate. It started as a rank-and-file caucus that explicitly worked with parents and the community to fight against school closures. But in recent years it has seldom taken a grassroots campaigning approach and has not increased its strength. While the CORE-led Executive Board led the 2012 strike to a partial victory, both the union and public education in Chicago took severe damage a year later with the closure of 50 schools. The union and allied community groups conducted a lengthy fight, which reduced an earlier hit list of over a hundred schools by more than half. There was a three-day march to all 50 of the schools that remained under threat the following May, but the school closures went through and have not been reversed. This defeat was largely a result of the underdeveloped character of the community and parent organizations, which for the most part were unable to organize past public hearings, but there was also a severe deficit in the union’s development of on-the-job power which has seen a steady loss of experienced teachers, a demoralizing effect on those who remain and a general weakening of the union’s strength. Turnout at union rallies and CORE meetings suggests that younger teachers do not look to the union for solutions in the same way that their immediate predecessors, who built CORE, did.

Today, left and socialist rank-and-file activists are correctly pointing for the need for CORE to return to its struggle-oriented roots and remake its democratic internal life. It was many of these teachers who developed the strongest bargaining demands and put them to CTU leadership in the lead up to the current negotiations.

A continuation of the CTU leadership’s current approach would miss an enormous opportunity for more powerful solidarity than in 2012. SEIU 73 is moving into action. Local 73 includes Chicago Park District workers and is putting forward a strategy of striking the parks and schools together. Add to this the expiration of the Chicago Transit Authority (CTA) workers’ contract at the end of the year and there is the potential for a united, all out public sector fight back against Chicago’s corporate elite if union leaders are willing to build for it. Such a fightback would need mass community support and participation. The Chicago corporate elite are united in fighting us, we need to unite to fight them. Enormous gains – like a total transformation of our schools, parks, and transit system funded by taxing the rich – are possible if union leaders, newly elected democratic-socialist city councilors, and left forces come together to fight in this way. On the other hand, missing this opportunity to push forward could have demoralizing consequences.