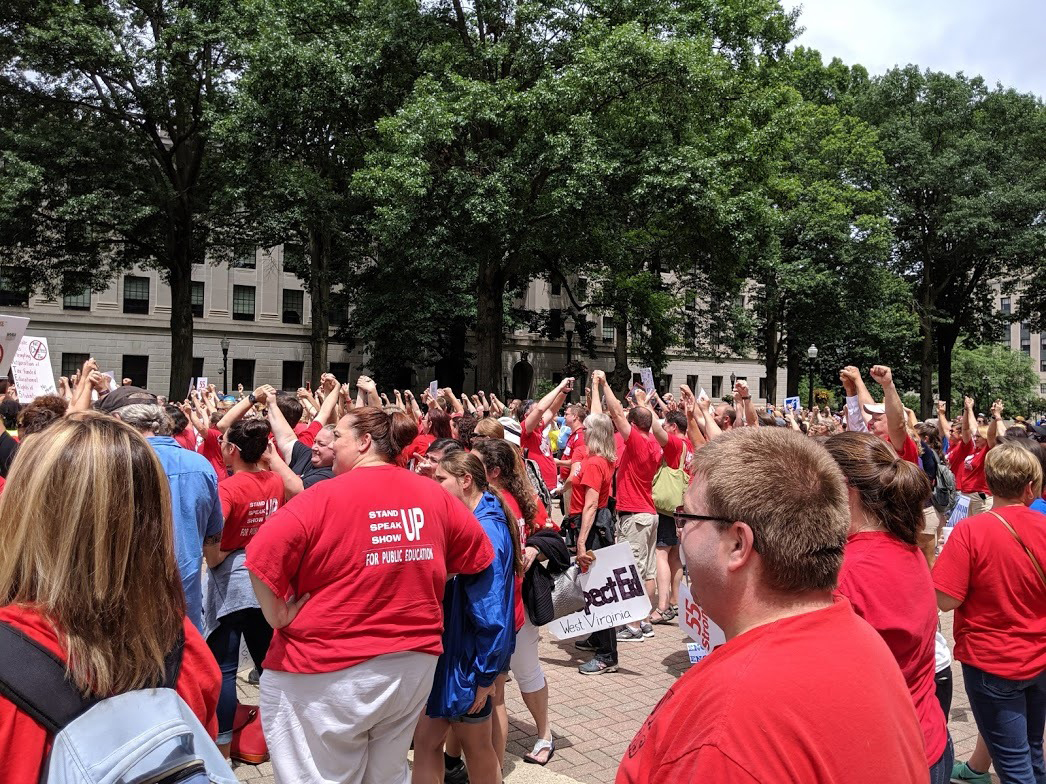 In the wake of the historic strikes led by West Virginia teachers, Republican legislators in the Mountain State have passed a retaliatory “Omnibus Education Bill” in a special session of the legislature. The bill has now been signed by Republican Governor Jim Justice. Among other things, the bill will introduce the first charter schools to the state and threatens to undermine the power of the WV teachers’ unions who have played a key role in reigniting labor struggle in the U.S. In a continuing show of strength and solidarity, teachers from across the region gathered at the capitol building in Charleston to oppose the bill.

The bill was introduced after West Virginia teachers struck twice in the last two years. The historic nine-day strike in February 2018 triggered a wave of similar strikes by teachers across the country from South Carolina to Los Angeles In many cases, teachers and other education workers have won significant wage gains and in some cases pushed back against corporate privatization.The struggle also opened the space for other workers to take action including the New England Stop & Shop grocery store workers who struck in April.

In March of this year, Republican legislators introduced a similar bill, which was widely understood as retaliation for the strike last year. That attempt backfired, bringing the teachers back out on strike for the second time in under a year — this time with explicitly political demands — showing how well the teachers had learned the lessons of the first strike, now armed with the experiences of their brothers and sisters across the country, and enjoying continued support from their communities. After two days on strike, the teachers defeated the bill.

Now increasingly desperate, the legislature reconvened for a special session in June to introduce a nearly identical bill. By waging this battle in the summer, when the teachers are unable to strike, they are desperately hoping that a defeat now will demoralize the movement enough to avoid a strike in the fall and get the country’s teachers back under control before their militancy spreads too widely to workers everywhere.

Unable to strike, WV teachers and their supporters gathered at the capitol over several days to protest the bill and defend the gains of the 2018 strike. Implicit in the gatherings is a threat of further strikes in August, when classes resume. At a rally attended by members of Socialist Alternative from Pittsburgh, speakers railed against the hypocrisy of the legislature and invoked the memories of Mother Jones, Ludlow, and the Civil Rights movement, but to much smaller crowds than during the strike in February. The crowd, numbering only about 1,000 — much smaller than the 5,000 estimated to have attended during the 2018 strike — dispersed at the end of the rally, some to gather inside the capitol building, some to come back in the evenings when debates would resume, and many to go home.

Everything about the conduct of the legislative debate indicates an attempt by legislators to avoid the kinds of confrontations with teachers that characterized the earlier fights, like gathering and chanting outside the House chambers. On the day we attended, House debate on the bill was held at 8 am, then closed and postponed when teachers began arriving by bus from across the region, to be re-convened at 6:30 pm, after the busses returning teachers home would leave. Without the impact of a strike, the teachers’ negotiating power was limited, and with opportunities to put public pressure on the legislators so restricted, the teachers were left in a very weak position.

What is urgently needed is an offensive push by the teachers to widen the struggle. Even if they defeat this attack by striking in August, there is nothing stopping the reactionary Republican-dominated state government from trying again and again, escalating its tactics each time, learning the lessons of every past battle and applying every dirty trick they can come up with. They desperately fear losing control of the situation and seeing the demands of the movement escalate beyond teacher pay, health care, and charter schools, and onto things they could less easily afford. They fear what will happen when the working class learns what power it has and how to use it. Only an escalation by the workers can result in a lasting victory, one which can build the fighting organizations of the working class.

The teachers need to broaden their struggle to other workers, particularly in the public sector, by calling for a strike of all public sector workers, calling for nation-wide teachers’ actions against privatization, and fighting for more universal demands like Medicare for All, which could draw in the support of workers in the private sector too. By building solidarity with all workers across the state, the teachers can bring in much-needed reinforcements from workers and their communities across the region. Without escalating the fight, the legislature will be able to wait out the teachers and their supporters, counting on the teachers’ ability and willingness to strike running out. These tactics will be necessary to build forces of the working class able to challenge the control of the right-wing servants of capital in the legislature, posing the question of who runs WV.

There is enormous potential now to build on the momentum of workers in the public sector to defeat this bill and many others. “I think as this movement gains momentum, we’re seeing more and more working-class people realizing that this struggle is all of our struggle,” said Jenny Craig, a teacher in Wheeling and a member of the West Virginia United Caucus, a rank-and-file caucus in the teachers’ unions advocating for more democratic structures within the unions and focusing on progressive politics. “If they can do these things and pass these measures, especially the anti-strike and anti-worker provisions of this bill to the largest workforce in West Virginia, then who’s next?”

By appealing to other public sector workers to strike with the teachers and building support in the private sector, the teachers’ demands can carry greater weight. While a statewide teacher strike is extremely disruptive to big business, a strike of all public sector workers would grind the state to a near-halt and serve as an example to workers engaged in every kind of struggle against capitalism of what kinds of tactics are needed to win major and badly-needed changes. The ruling class fears the re-discovery of strikes as a tool of political struggle. By escalating their strike to such a large and critical layer, workers have the power to force major concessions to address privatization, underfunding of vital public resources, environmental destruction, and many other issues facing working class communities across the state, in addition to pay and working conditions.

Over the last two years, WV teachers have taken the lead in re-vitalizing the labor movement in America by reintroducing the strike as a crucial tool in the struggle against capitalism. By attacking them, the ruling class aims to deal a devastating blow to the re-awakening labor movement before it can pose a serious risk to the power of capital. It’s therefore critical for workers everywhere to support the WV teachers against these attacks and build the power of the working class by linking this struggle to the many other struggles against capitalism and all its effects.