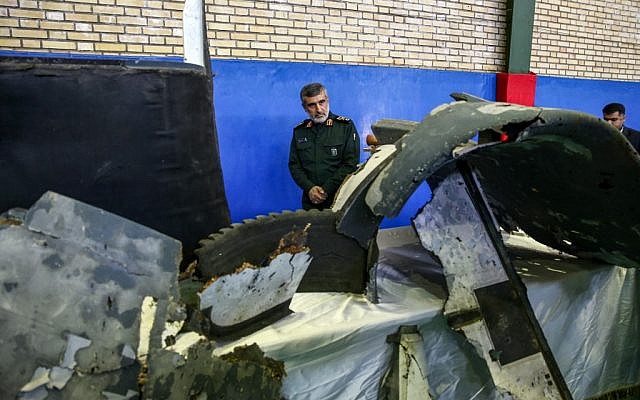 The United States is dangerously close to a military conflict with Iran. The catalyst was the shooting down by Iran of a U.S. military drone on June 20. In response Donald Trump authorized airstrikes against Iran only to halt them ten minutes before they were due to begin. While the immediate threat of military action was temporarily withdrawn, Trump has gone back on the offensive, imposing new sanctions against Iran while threatening “Any attack by Iran on anything American will be met with great and overwhelming force. In some areas, overwhelming will mean obliteration!”

Questions still remain regarding the downing of the military drone. The Iranian government alleges that it was a spy drone that had entered Iranian territory. The U.S. government counters that the drone was shot down in international waters over the Strait of Hormuz.

The current deterioration of relations between the U.S. and Iran began with  Trump’s decision to pull out of the Iran nuclear deal in May. This 2015 agreement between Iran, the U.S. the EU, Russia and China was designed to limit Iran’s capacity to build nuclear weapons in exchange for the lifting of sanctions and greater integration of Iran in the world economy. The nuclear deal negotiated by Obama’s Secretary of State John Kerry represented a certain normalization of relations between the U.S. and Iran after decades of antagonism going back to the 1979 Iranian revolution.

Iran has been economically crushed by U.S. sanctions, first by the U.S. in the 1980s and then by the U.N. in 2006. With Trump’s new wave of sanctions following the withdrawal from the nuclear deal, the government of Hassan Rouhani, and Iran’s Supreme Leader Ali Khamenei have been backed into a corner, and it is completely predictable that the Iranian regime would hit back.

In fact Rouhani has adopted a calibrated approach. He announced a speeding up of uranium enrichment, but falling short of producing weapons-grade uranium. A disputed incident attributes Iran with putting mines on tankers in the Gulf of Oman, albeit placed above the water-line so the tankers didn’t sink. The main strategy from Iran is not to push for an all-out military conflict with the U.S., but to pressure China and the European Union into forcing the U.S. to back off from its attacks.

While the Iranian government is responding to threats from U.S. imperialism, Iran also plays a regional imperialist role in the Middle East. A key factor in growing tensions in the region stems from rivalry between Iran and U.S. ally Saudi Arabia. An implicit threat in Iran’s current actions is to stop oil moving through the Strait of Hormuz, something that would pose a serious economic threat to Saudi Arabia. It could also have a serious effect on the world economy which is already heading towards a downturn. Thirty five percent of the world’s seaborne oil shipments move through the Strait and serious disruption could lead to a spike in oil prices.

In the growing regional conflict, Saudi Arabia, the key Sunni power in the region, has effectively formed an alliance with Israel. Iran, as the key Shiite power, has growing influence in Iraq, and has propped up governments in Syria and Lebanon. The ongoing civil war in Yemen has seen Saudi Arabia wage a vicious war against the Iranian-backed Houthis. On a global scale, Saudi Arabia has historically been closely aligned U.S. imperialism, which sees the Saudi monarchy as a guarantor for U.S. “interests”, crucially the flow of oil to the U.S. In recent years, Iran has increasingly gotten backing from Russian imperialism.

However, significant sections of the U.S. establishment are reluctant to throw themselves further into the regional conflict in the Middle East, seeing it as a threat to wider stability in the region. They also feel that Trump’s withdrawal from the Iran nuclear deal and unambiguously taking the side of the Saudi/Israeli axis was a mistake that directly contributed to instability.

Within the Trump administration, Secretary of State Mike Pompeo and especially National Security Advisor John Bolton have been the most vociferous hawks, pushing for regime change in Iran. However, significant sections of the state apparatus aren’t thrilled about military escalation with Iran. Trump himself has adopted a contradictory approach towards the question. During the 2016 election he took a hard line against Iran but more broadly vowed to stop U.S. involvement in “endless wars.” The rapid preparation and then cancellation of airstrikes raises questions of who in the Trump administration is calling the shots.

The Democrats at the moment oppose the escalations of tensions in Iran. The party leadership generally favors rejoining the nuclear deal that John Kerry negotiated and Trump abandoned. This isn’t a sign of the Democratic Party’s anti-war or anti-imperialist credentials. They have enthusiastically supported bombing Syria and savage sanctions against Venezuela to force regime change. They have constantly attacked Trump for being insufficiently “hawkish” towards Russia. They are more motivated by maintaining stability in the region and improving the U.S.’ relation with the EU, most of whose leaders want to keep the deal in place.

Despite the heightened tensions, an invasion or full-scale war with Iran not in the cards at this point. And, if it took place, it would not be a repeat of George W. Bush’s invasion of Iraq in 2003. Iran has twice the population of Iraq and, despite its repressive regime, the Iranian regime has a stronger base of support than Saddam Hussein did in Iraq.

On an international level, a U.S. invasion would face strong opposition, even from many of its allies. Trump, who has spent a lot of time attacking “allies” and imperialist institutions like NATO, would be unable to assemble anything resembling Bush’s “coalition of the willing.” An invasion would lead to a massive antiwar movement internationally that could well be on a bigger scale than the mass movement against the war in Iraq. There is also no appetite in the U.S. population for such a conflict.

Nonetheless, given the instability of the Trump administration and global capitalism, a serious military confrontation between the U.S. and Iran remains a very real danger. Socialist Alternative stands against all U.S. imperialist aggression against Iran. We are for ending the sanctions which overwhelmingly hurt ordinary people. This doesn’t mean that we support the repressive, reactionary regime in Iran. Nor do we support Iran developing nuclear weapons. But U.S. imperialism is not interested in liberating the Iranian people but in maintaining its position in the region including overall control over the flow of oil.

We call for Iranian working class to bring down the regime. Iran has a long history of working-class struggle. It was the Iranian working class that overthrew the U.S.-backed Shah in the revolution 40 years ago. The current Iranian government was shaken in 2009 by the mass protests of the “Green Revolution”, which prefigured the “Arab Spring” two years later in Egypt and Tunisia.

The Iranian population is facing a desperate economic situation in large part due to the sanctions. The economy contracted last year by 4.9% and inflation is over 50%. In response, there has been a rising wave of protests and strikes involving teachers, truckers, factory workers, shopkeepers, farmers and pensioners. On May Day, a protest of teachers and students outside the parliament in Tehran chanted “Workers, teachers, students, unite” and “High costs and inflation are hurting people’s lives.” The potential exists for a serious challenge to the discredited regime but the reality is that the attacks by the U.S. will tend to rally sections of the population behind the regime and its nationalist appeals.

Through international solidarity and the building of independent working-class organization, we can change not just an individual regime, but end the whole capitalist system which generates mass inequality, ecological catastrophe and endless war.