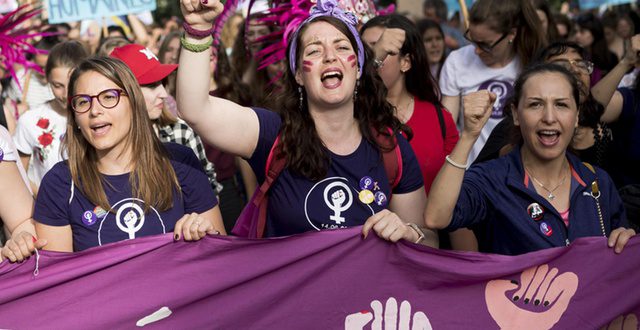 Over 500,000 women, workers and young people took to the streets all over Switzerland on 14th of June as part of a nation wide women’s strike.

The sheer size of the demonstrations in many towns and cities sent out a clear message that the status quo will no longer be tolerated. A massive160,000 people were protesting on the streets of Zürich alone, while 40,000 gathered outside the parliament in Bern, 40,000 to 50,000 in Lausanne and Basel, 25,000 in Geneva, 12,000 in Fribourg and Sion and much smaller towns, such as Neuchatel, St Gallen and Delémont, reporting number between the 4,000 to 10,000 mark.

This historic action represents the largest mobilisation of the country’s recent history, and was undertaken nearly 30 years after the national women’s strike of 1991 which also saw a huge mobilisation of over 500,000 women in the streets nationally, and forced the implementation of legislation on equality, including pay equality and the introduction of maternity leave. Equality had been written into the constitution a decade earlier, in 1981, but little had been done to legislate and this mobilisation was necessary to force the establishment to act.

30 years later and the demands have not really changed. Women in Switzerland still earn an average 20% less than their male counterparts, are more likely to be in precarious and low-paid jobs, have lower pensions and carry out 282 million hours of unpaid labour each year in the home or in the form of voluntary work (the equivalent of 148,000 full time positions). Recently, the parliament voted against 2 proposals to introduce paternity leave.

The strikers are demanding equal pay for equal work, and end to precarious conditions, decent pensions combined with a lowering of the retirement age, a re-valuing of domestic work and care work, a reduction in working hours without loss of pay, the socialisation of childcare and care work that women generally perform in the home, the right to choose and the right to bodily autonomy whether it comes to abortion, sexuality or gender identity, an end to gender-based, homophobic and transphobic violence and harassment, rights for migrants, inclusive and comprehensive sex-education in schools and for international solidarity and an end to racism!

The strike was initially called by women in the trade unions who passed a resolution at the Swiss congress of trade unions in June last year calling for a strike on the 14th of June 2019. Immediately after this, an assembly was called and attended by some 150 delegates from each canton. Since then, women’s collectives were formed in each region, city and town with trade union activists, ordinary workers, students and young people to the fore. Inspired by the recent surge of feminist movements and struggle globally including the massive strike on International Women’s Day 2018 in the Spanish State as well as the recent students’ movement against the climate catastrophe, the collectives organised an assembly in March to formally call for the 14th June strike which gathered over 500 women from all over the country.

For the past year, the collectives have organised and participated in many events and actions such as protests, civil disobedience and have taken part in the demonstration against climate change, organised protests and actions on International Women’s Day and interventions in 1st of May demos. Other actions to build for the strike over the past few months included various interventions and art performances in public spaces, dramatic banner drops on huge dams and the setting up of a feminist radio station. The strike was widely supported amongst the population with polls showing 63% support for the strike in the days before, as well as the indication that 1 in 5 women were planning to participate in strike action that day and with #frauenstreik2019 and  #2019grevefeministe trending on social media.

June 14 – Day of protests and pickets

Protests on the 14th of June started at 1am with actions in many cities, including marches against gender-based violence, banner drops on landmark monuments, noisy “pots and pans” protests and bonfires. From the morning onwards, picket lines were organised in many workplaces, notably outside hospitals, nursing homes and care facilities with solidarity actions and pickets from cleaners, bin men and other traditionally male professions. Picket breakfasts were organised in each town to support those on strike, these morning actions were attended by over 100,000 nationally. Events were organised throughout the day from improvised placard-making workshops in schools or on the street, picnics, speeches and feminist choirs, and culminated with the afternoon protests staged in every town and city.

Employers’ organisations viciously criticised the strike, calling it illegal and strongly opposing its demands. However, the movement and pressure was such that many employers were forced to adopt a conciliatory position and allow for staff to participate in the action in some way.

Traditional right wing parties such as the PLR (Liberal Radical Party), government ministers and high profile right wing politicians also came under pressure to show some form of support to the action. While on that day, the UDC (Democratic Centre Union), a far right conservative bourgeois party unsurprisingly opposed the strike and their women members organised a charity lunch to raise funds for an anti-choice organisation to mark the day!!

Need for a workers party

The Greens and PS (Parti Socialiste, affiliated with the Labour Party) have consciously put themselves forward in this movement. However, they represent no alternative. They have been in government both at federal and canton level for decades and are constantly swaying to the right, supporting austerity policies that hit women and working class people the hardest and only put forward watered-down reforms.

Although trade union activists have been the backbone of this movement, and their demands are clear, it is politically very eclectic and confusion is present, with no clear anti-capitalist outlook from the collectives and the presence of elements of liberal feminism.

This points to the need for a clear left working class alternative in Switzerland that would be capable of bringing the demands of the movement to the fore. As in the rest of Europe, the conditions of workers in Switzerland are under attack, yet no party represents their interests on a national scale. Such an alternative could be a major step forward.

A new generation gets active

The momentum gained by the movement over the past few months is truly inspiring and has seen many young women, workers and students getting active in politics for the first time. The action also popularised the idea of strike action as a method that can force change and push for demands that will benefit the working class as a whole.

While a call has been made for the collectives to meet on the 2nd of July to discuss a strategy going forward, the struggle must continue in the aftermath of the strike and demands must be placed on the trade union movement to call for follow up actions, including strike action involving all workers. For the aspirations of the hundreds of thousands who took to the streets to be met, the capitalist system which breeds inequality and discrimination, with exploitation at its core must be challenged and a socialist alternative built.