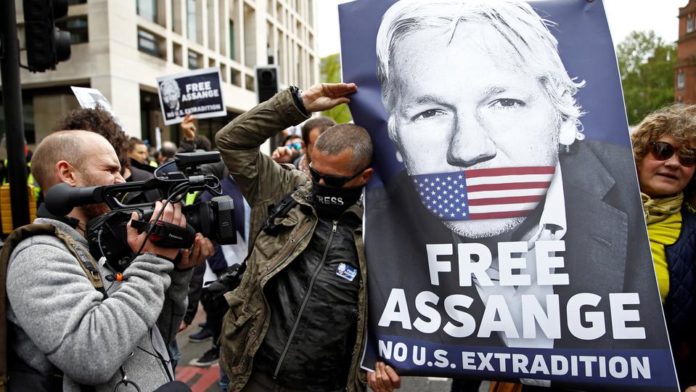 On Thursday, May 2 of this year, Wikileaks founder Julian Assange appeared in British court for the first of what is certain to be many hearings on his possible extradition to the U.S. The U.S. wants to prosecute him in relation to Chelsea Manning’s 2010 leak of classified U.S. military and State Department documents. The attempt bring the hammer down on Assange for helping to bring this vital information to the public constitutes an attack whose intended target is much broader than Assange himself. It is an assault on the free-speech rights of all citizens, journalists, and media outlets who might otherwise get the idea to expose the truth about U.S. foreign policy.

The extradition proceedings, which may take years to play out, began only one day after a British court sentenced Assange to 50 weeks in prison for skipping bail in 2012. The original arrest was ostensibly related to Assange being accused of sexual assault in Sweden, but the implicit threat of subsequent extradition to the U.S. to be prosecuted for his Wikileaks activities led Assange to seek refuge rather than surrender himself to the courts.

Since 2012, Assange had been holed up in the Ecuadorian embassy in London, where the Ecuadorian government granted him asylum and citizenship, under the government of then-President Rafael Correa, a left populist and Wikileaks supporter. However, the government of Correa’s successor, Lenín Moreno, likely bowing to U.S. pressure, revoked Assange’s citizenship and asylum status on April 11 of this year, freeing the hand of the Metropolitan Police Service to arrest Assange at the embassy, which they did the very same day.

Despite Trump famously proclaiming in 2016 “I love Wikileaks,” he has made a characteristic about-face. He is now deflecting in apparent deference to his cabinet on the issue of Assange: “I know nothing about Wikileaks. It’s not my thing.” In fact, it was in Trump-era secret courts in 2018 that the current indictment against Assange originated.

This opportunistic flip-flop is easily explained in the context of Trump’s open war against journalists. If Assange is convicted for his Wikileaks activities, it would set a legal precedent for prosecuting investigative journalists for carrying out basic, central components of their work, such as encouraging sources to divulge information or helping sources to remain anonymous. Trump would no doubt be eager to set such a precedent, given his own penchant for lying to the public and evading accountability.

The attempt to extradite Assange must be seen in the context of the ongoing assault on free-speech and personal-privacy rights in the U.S. that has been underway since at least the G.W. Bush administration, which seized on the September 11, 2001 terrorist attacks as an excuse for launching a broad program of secret, warrantless surveillance.

The ramping up of the U.S. police state only accelerated under the Obama administration, which prosecuted more individuals under the 1917 Espionage Act than all previous administrations combined. It was under Obama that Chelsea Manning was sentenced to 35 years in maximum-security prison. Though later pardoned in the final days of the administration, for nearly seven years Manning faced conditions that the UN special rapporteur on torture described as “cruel and inhuman.”

Manning’s crime? Giving Wikileaks 700,000 classified documents, various collections of which have since come to be known as the Afghan War Diary, the Iraq War Logs, and the Cablegate diplomatic cables. Some of these documents exposed atrocities committed by the U.S. military, including indiscriminate slaughter, execution of civilians, and calling in a bombing raid to cover up those wrongful executions. Manning’s over-the-top punishment is just one more piece of evidence showing how far U.S. imperialism is willing to go to protect itself from accountability to the public.

The Truth Is Only Half the Battle

Julian Assange and Wikileaks have played an important role at shedding light on what really goes on behind the democratic facades of the imperialist powers. It is absolutely correct and in the socialist tradition to expose the corrupt and criminal policies carried out by capitalist governments. In fact, one of the first acts of the workers’ government in Russia after overthrowing capitalism in 1917 was to openly publish all the secret treaties between the European powers, wherein they plotted how to carve up the world according to their geopolitical interests.

Nonetheless, it’s one thing to expose these imperialist crimes, but to stop them requires going a step further. It requires a strategy of mass militant campaigning and a clear anti-imperialist, pro-working class position. Wikileaks has neither; as an organization it is not socialist, left-wing, working-class, or democratic. As for Assange himself, he openly met with right-wing politicians such as the UK Independence Party’s Nigel Farage while in refuge at the Ecuadorian embassy.

Therefore, Wikileaks is not enough. We need unions and social movement organizations with a fighting strategy to hold politicians accountable and curb runaway corporate power. We need a democratically organized mass movement to ensure that those who ordered the crimes exposed by Wikileaks, Manning, and others are brought to justice.  Ultimately, what is needed is a political party of, by, and for working people, with a grassroots accountable leadership, that campaigns tirelessly, year-in, year-out – not only to stop the worst immediate abuses of the capitalist politicians, but also for a positive program of socialist transformation of society. Such a transformation is the only way to guarantee that no more innocent lives around the world are sacrificed to the whims of corporate U.S. imperialism in its endless quest for geopolitical dominance – or in attempts to cover up its crimes.