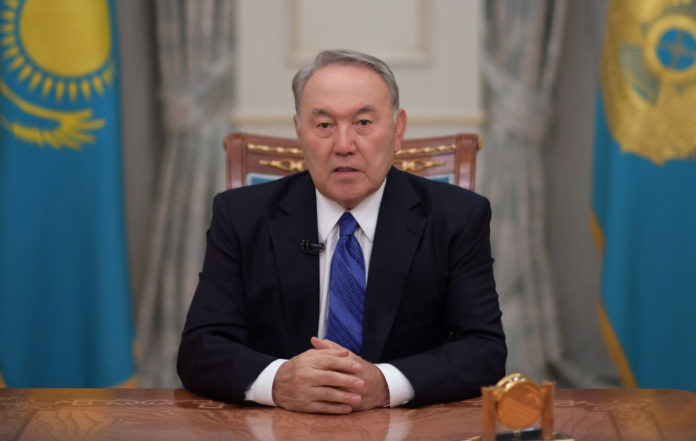 What should socialists in Kazakhstan do?

By Sergey Skobelev, reposted from socialist.news, website of the CWI in Russia, translated from Russian by Philip Snyder

In his comment on Nazarbayev’s “departure,” political commentator Dosym Satpayev put it most succinctly: “He’s left us, but still remains.” On March 20th, Nursultan Nazarbayev, “permanent” president of Kazakhstan since 1990, formally resigned his office. Despite this, he retains his role as lifelong “leader of the nation” and heads the security council, to which the acting president, all security agencies, and state corporations are subordinate. “There’s a feeling that they closely watched the Uzbek experience in Ak-Orda [the presidential residence], where the sudden death of President Islam Karimov left both his family and the regime politically weakened. It’s as if they decided to get ahead of the curve,” Satpayev concluded. Incidentally, acting President Tokayev appointed the former president’s daughter, Dariga Nazarbayeva, to his previous position as speaker of the Senate shortly after taking office.

These tricks mask the deep crisis of Kazakhstan’s political system, a special case of post-Soviet Bonapartism, in which the ruling class (big business and its beneficiaries) are systematically excluded from direct political power in exchange for the guaranteed protection of its property and, when differing factions come into conflict, that contradictory interests are arbitrated through the state. This process goes further here than in Russia, where, should Putin’s regime fall into crisis, the bourgeoisie may still consider an alternative to it, and – at the critical moment – support his opposition. In Kazakhstan, however, the political field has been completely cleared out. After years of political repression and tightening the screws*, a change in the Elbasy [“head of the nation”] regime could not come from anywhere other than the regime itself. Out of a sense of mutual responsibility, the ruling class has become inextricably fused into the bureaucratic apparatus of the ruling party, “Nur Otan.” The survival of this “political organism” is seen as the only way to maintain the status quo, satisfy the interests of all its beneficiaries: Nazarbayev’s entourage, various power groups, transnational capital, Chinese and Russian imperialism, and avoid the redistribution of property and spheres of influence. Such a change was made possible in Uzbekistan through the course of reforms under the new president, Shavkat Mirziyoyev, which frightens the ruling class of Kazakhstan.

Indeed, these political shifts are little more than insurance policies for Russian and Chinese imperialism (two pillars of Nazarbayev’s Bonapartism). As the Wall Street Journal rightly pointed out in their article “China, Russia Stand to Gain From Kazakhstan’s Political Transition” (March 20): “A smooth political transition after the unexpected resignation of Kazakhstan’s longtime leader serves the interests of neighboring Russia and China, which have economic and security stakes in the region.” The choice of Tokaev isn’t accidental: he comes out of the old Soviet nomenklatura, maintains close ties with the Kremlin, and – at the same time – is considered an “old and good friend” by the Chinese dictatorship (from a statement by the Chinese Foreign Ministry).

The stakes are high and, in the event of Nazarbayev’s death, the regime of Ak-Orda – which destroyed post-Soviet industry and social services through privatization and corruption, dotted the map with new ghost towns, sold off public land to imperialists, killed dozens of striking oil workers in Zhanaozen, and crushed all political opposition – intends to remain at the helm.

However, one can’t say that the situation is completely under their control. It’s true – there is no independent media or organized opposition left within the country – but an absolutely undemocratic transfer of power, combined with rigged elections, could cause mass politicization and spur discussions among ordinary workers, state employees, and young people about the country’s future. Even at a time of increased suppression and targeting of the opposition, which defined the period following the defeat of the 2011 oil workers’ strike in Zhanaozen, spontaneous protests continued to break out around the country: for example, in February 2014, hundreds of young people rallied in Almaty to protest a 20% devaluation of the Tenge. Indeed, in the wake a mass politicization, oil workers, dissatisfied with low wages and poor working conditions, and remembering the brutal lessons of Zhanaozen, could quickly organize themselves into the vanguard of the struggle. Under new conditions, such protests are able to quickly expand and radicalize.

Similar to how the fire in Kemerovo bolstered distrust in the Russian government at the worst possible time for it, a recent fire in Astana – in which five children died – has played a similar role. Radio Azattyk writes that this tragedy has become “the last in a series of events, which demonstrate a growing discontent in Kazakhstan” – like other cases that found an echo throughout the country, including a mass brawl on New Year’s Eve in Karaganda that ended in a killing, the July 2018 murder of figure skater Denis Ten in Almata, and the flooding of Astana that same year. Indeed, the fire in Kazakhstan’s capital city “personifies many of the country’s social problems, as well as the widening gap between the authorities and those they govern.“ The author went on to name the victims of this fire as representatives of “Kazakhstan’s new urban underclass.”

Social media blackouts and a renewed push for the country’s “Turkmenization,” such as President Tokayev’s costly initiative to rename the capital city of Astana, as well as central streets throughout the country, after former President Nazarbayev (with some analysts estimating costs up to $125 million, or approximately one tenth of the total education budget in 2019, for renaming of the capital alone), could spark protests by dissatisfied youth and, more generally, workers living paycheck to paycheck.

Nazarbayev left the presidency just a month after publicly reprimanding the ministers he appointed, and actually taking responsibility for key problems in the country: from the corruption of the courts and the police to unemployment and low salaries of state employees. This can play the same role as Putin’s support for pension reform. Taking personal responsibility for the inability to maintain current living standards for the older generation, as Putin did in this instance, precipitated a shift in blame away individual officials (on the principle of “boyars are to blame”) and onto the regime of “United Russia” as a whole, and specifically to the president.

But the revival of political processes in Kazakhstan will not be able to win better conditions for the vast majority unless a political force emerges that can unite workers, state employees, students and young people in struggle. At present, the only opposition force is the, legally banned, “Democratic Choice of Kazakhstan” (DCK), but it can hardly be called an opposition, since it takes no steps to actually organize supporters and mobilize a fight back.

The tactics of the DCK logically flow from its program and class character. The party program, with its bourgeois leadership and promises of purely cosmetic social reform, aims to attract disgruntled workers and middle layers under the conditions of an absolute political vacuum. “The examples of Armenia or Algeria show that when tens of thousands of people take to the streets, the police are reformed, going over to the side of the people, and the regime falls,” explained the DCK leader Ablyazov. Of course, even if it were possible to change the regime with such an approach, it would be incapable of providing a radical improvement in the lives of the majority. While the question of Armenia has not yet been resolved by the course of events, the “color revolutions” in Kyrgyzstan, Ukraine and other countries have repeatedly shown that if, during the protests (even the most widespread!), the workers and their organizations do not become a mass political force and, consequently, fail to take the political processes and economy under their control, the maximum that can be achieved is a slightly more democratic facade of the regime and a social policy that is slightly less cannibalistic. That said, even a “color revolution” of this type is already better than present-day conditions, which means socialists will actively participate in these spontaneous mass demonstrations, regardless of those limitations. But we will never tire of repeating: “This is not enough!”

The task is to completely replace the capitalist regime with a truly democratic workers’ government. Such a government could then socialize oil and gas resources and key sectors of the country’s economy in order to direct their profits to the needs of the majority: education, medicine, social assistance, job creation, housing construction, etc. Democratic planning of the economy would allow for the rapid elimination of poverty and a rise in the standard of living for a great majority. And this requires – not bourgeois outcasts as leaders – but leaders in workplaces, in residential areas, from among simple working people and students. If trade unions, struggle committees or other organized structures are created in workplaces and residential areas, this will be the most effective defense for leaders in the struggle against repression.

The left in Kazakhstan, which has had the historical responsibility of agitation and mobilization around such a program, was set back many years after the suppression of striking workers in Zhanaozen and subsequent repressions. Today, we are once again faced with the challenge of an energetic intervention into unfolding processes, putting our analysis and program to the test, in order to find and consolidate cadre that can unite workers and youth into a mass party which would be capable of fighting for socialist change.

* Since 2001-2005, when opposition ministers and akims (heads of local government) from Ablyazov, Zhakiyanov, etc. were arrested and students held massive demonstrations against the regime; the suppression of the 2011 oil workers’ strike in Zhanaozen brought these developments to their breaking point.