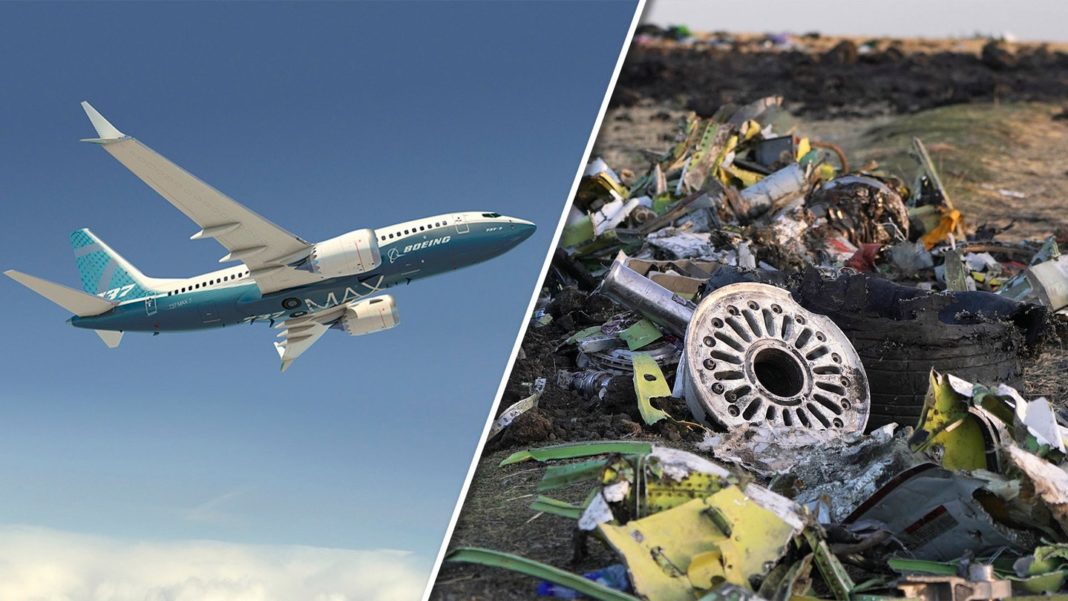 The horrific crashes of Ethiopian and Indonesian airline Boeing 737 Max airplanes with a total of 346 casualties has drawn into sharp focus the astonishing disregard for safety at Boeing Corporation.

As experts rummage through the carnage, it has become clear that the technical cause of each of these two recent crashes is identical – the hasty instruction Boeing’s new Maneuvering Characteristics Augmentation System (MCAS) anti-stall software. We now have evidence  that Boeing knowingly rushed the 737 Max into production with flawed software – despite warnings from inspectors and workers – to try and get an edge on its only competitor, Airbus.

This most recent example of reckless disrespect for workers and public safety forces the question: Can we stop corporations from profiting at the expense of public safety? If so, how?

Boeing cut corners in every direction in order to push experimental safety software into service on the 737 Max. It even failed to inform the pilots of the changes this complex new anti-stall software could make to the plane’s operation.

In a major article reviewing the history of the 737, Kent German writes:

“Boeing’s newest airliner, and the latest generation of the 737 family, was another response to a move by Airbus. Introduced in 2016, the Airbus A320Neo promised lower operating costs from completely new engines that burned less fuel. Though Boeing initially considered replacing the 737 with a brand new airliner, it instead followed Airbus’ lead by adding new engines to the existing fuselage. The reason? As The Air Current’s Jon Ostrower wrote earlier this year, designing a new airplane is immensely expensive and would have taken years. On the other hand, revamping Boeing’s baby again would get the Max in the air faster to compete with the A320Neo.

“The engines Boeing adopted were more powerful and efficient and larger still. In order to fit them in that same position under the wing, the company’s designers had to move the engines slightly forward. But that modification changed how the plane handled in the air, creating a potential for the nose to pitch up during flight.

“To overcome that action – raising a plane’s nose too high during flight can cause it to stall – Boeing then added the Maneuvering Characteristics Augmentation System (MCAS) system, which automatically pushes the Max’s nose down when sensors on the fuselage detect it’s too high. And it’s that chain of decisions – larger engines and the need to add MCAS – that’s now under scrutiny.”

Most shockingly, the Ethiopian and Indonesian airlines planes that crashed were not provided with all the necessary safety features. A New York Times article spells it out: “As the pilots of the doomed Boeing jets in Ethiopia and Indonesia fought to control their planes, they lacked two notable safety features in their cockpits. One reason: Boeing charged extra for them. For Boeing and other aircraft manufacturers, the practice of charging to upgrade a standard plane can be lucrative. Top airlines around the world must pay handsomely to have the jets they order fitted with customized add-ons.”

A essential part of the process of rushing the new engine design and software into production was political. Decades of lies by corporate lobbyists that “freeing up corporations from government regulation will make things better” has had a major impact on how the government approaches safety regulation. The Federal Aviation Administration (FAA), which used to inspect airlines for safety with qualified inspectors imbedded in the production process, has been gutted. By the time the 737 Max rolled out, control of inspections had been transferred from the FAA to Boeing itself.

Jeff Wise at Slate.com wrote: “According to Seattle Times aerospace reporter Dominic Gates, the FAA delegated the certification of the 737 Max’s MCAS system to Boeing itself. The company’s own engineers, ‘authorized to work on behalf of the FAA,’ conducted the safety analysis of the system, Gates writes, and ‘concluded that the system complied with all applicable FAA regulations.’”

This purely internal certification process allowed Boeing to repeatedly ignore warnings from independent safety experts, including those from the FAA itself: “A sensor linked to two fatal Boeing 737 Max crashes was flagged with the Federal Aviation Administration (FAA) more than 200 times between 2004 and the crashes in 2018 and 2019,” according to an analysis by CNN.

Boeing recently announced plans to fire 900 inspectors at its Seattle area factories, raising even  more questions about the company’s safety practices. Skimping on safety is not limited to Seattle factories, but is a consistent feature of how the corporate leadership runs all its operations. According to a  USA Today  report: “Damage to Boeing’s reputation could be even worse and it hasn’t been limited to the Max. The New York Times published an exposé last month that alleged shoddy work and weak oversight at Boeing’s plant in South Carolina, which makes the 787 jetliner. The Air Force has twice halted deliveries of the KC-46 midair refueling tanker, based on the 767 airliner, after finding manufacturing debris onboard.”

Even the usually business-friendly Seattle Times has been forced to publish an in-depth article documenting how key safety inspectors were being fired by Boeing, while at the same time “Within the FAA, its safety engineers worked under constant pressure from their managers to delegate more and more work to Boeing itself, and to speedily approve the safety assessments the Boeing designees came up with.”

Another key part of Boeing’s cost-cutting war was an attack on its well-paid, skilled unionized mechanics and engineers. Their first step was to move production away from the Machinist stronghold in the Seattle metropolitan area. The decision to start airline production of in South Carolina in 2011, rather than Washington State, was all about weakening the union. Lacking unionized skilled mechanics and engineers, the South Carolina plant has been exposed repeated for shoddy work.

A major article in the business journal Bloomberg.com exposed Boeing management’s culture of cost-cutting. It described Boeing’s “relentless message”: “Shareholders would henceforth come first at Boeing.” It goes on to documents a culture where Boeing compromising safety and quality for cost, including its determination to block unions at its South Carolina plant.

“Shop floor workers reported similar demands on schedule and cost. In 2016, William Hobek, a quality manager at Boeing’s 787 plant in South Carolina, filed suit in federal court claiming he’d been fired after repeatedly reporting defects up the chain of command. When he complained, a supervisor replied, “Bill, you know we can’t find all defects,” according to the suit. Hobek called over an inspector, who quickly found 40 problems, the suit claims. (It was later settled; Hobek declined to comment for this story, citing settlement terms.) Al Jazeera in 2014 sent a hidden camera into the plant and caught some employees on tape saying they’d never fly on the planes because of shoddy workmanship.”

In a Guardian article, Richard Mester, recently fired after having been elect a union steward at the South Carolina plant, stated: “It was easy to see it was because we were union members, Boeing has no qualms about squashing any possibility of a union down here. Unfortunately we were the result of that.”

Ripping Off the Public

Not only has Boeing sent corporate lobbyists to Washington, D.C. to get concessions, it has twice held up the residents of Washington State with threats to move production facilities elsewhere. In 2003, Boeing demanded and won a $3.2 billion change in tax laws, new “environmental” laws, new government agencies and cabinet positions, cuts in almost every social program, $131 million of cuts in education, hikes in college tuition, a $24 million new port at public expense, $4.1 billion in transportation spending of their choice, and 60 or so other “recommendations.”

This prompted Democratic State House Representative Hans Dunshee to state: “If they’d wanted a stadium, we would have built them a stadium. If they‘d wanted us to bulldoze Mount Rainier so their planes could take off easier, we’d have done it” (Seattle Times, 1/22/2004).

A decade later, in 2013, Boeing threatened again to leave. In a three-day secretive session, Boeing extracted a $8.7 billion tax-credit package – the biggest hand out of public funds ever given to a corporation. Yet, despite getting everything they demanded, in the subsequent years Boing has eliminated 4,000 jobs from it’s Washington State operations.

It is not just by emptying public coffers into corporate bank accounts that Boeing is harming the public. Its reckless actions – deliberately covering up safety issues and selling planes without all the necessary safety features – resulted in the deaths of 346 innocent people. In the world of ordinary working people, this would be called callous manslaughter and result in a life sentence. But to imagine that the top corporate executives of Boeing will do serious time, if any, in jail is a fantasy. At the same time in our world, school kids from poor families are being shamed for owing lunch money!

Also on display is the total failure of the government to control a corporation of Boeing’s size. When the oft-criticized federal regulators face a company with Boeing’s wealth and  political clout, the outcome always favors the company. This exposes how the government under capitalism is essentially the executive committee of the billionaire class and the big corporations. Maybe some government regulations will be tweaked in response to public scandals like the 737 Max crashes, but Boeing’s profit-maximizing nature  will continue.

The Need for Public Ownership

During Boeing’s 2013 extortion of Washington State taxpayers, newly-elected socialist Seattle City Councilmember Kshama Sawant spoke truth to power. In a speech that was widely broadcast by TV networks, she stated: “The only viable response to such a situation is to say the needs of the people of Washington – the same ones who have subsidized Boeing with tens of billions in taxpayer handouts – come first.”

Socialists believe only democratic public ownership can address the fatal flaws that profit-maximization weaves into the heart of Boeing’s policies. Public ownership would mean having inspectors whose only concern is safety, engineers and machinists whose only concern is the quality of their product and public safety. A public entity would be accountable to the local community and could no longer threaten to leave in search of richer financial pickings elsewhere. The 2004 pamphlet “The Boeing Rip Off” documents in more detail the kind of benefits that could be gained from public ownership of Boeing.

This same flawed power dynamic is at the center of crises in the medical, energy, oil, construction, and tech industries as well as the gig economy, and most importantly in banking and finance. Only public ownership and democratic control of the massive corporations that dominate these industries can transform them into public entities that can operate in the interests of the overwhelming majority of the population.

The vast resources currently hoarded by these corporations could then be used to address key social issues like poverty and the environment. Socialist policies can address the unmet need of the vast majority of the public and allow working people to have a life where they can enjoy time with their families and friends. By using the hoarded wealth and resources of giant corporations to ensure all workers  have a living wage, decent housing and free universal health care, socialist policies can end the extreme and wide-spread levels of stress caused by insecurity over rent, health care, and worry over when the next paycheck will come.

Boeing’s criminal activity, alongside the willful neglect of climate change by oil and gas companies and the horrors inflicted on working people by the for-profit health care system, are rooted in the flawed logic of capitalism. Only ordinary working people getting organized to fight for socialist and working-class policies that can change this.