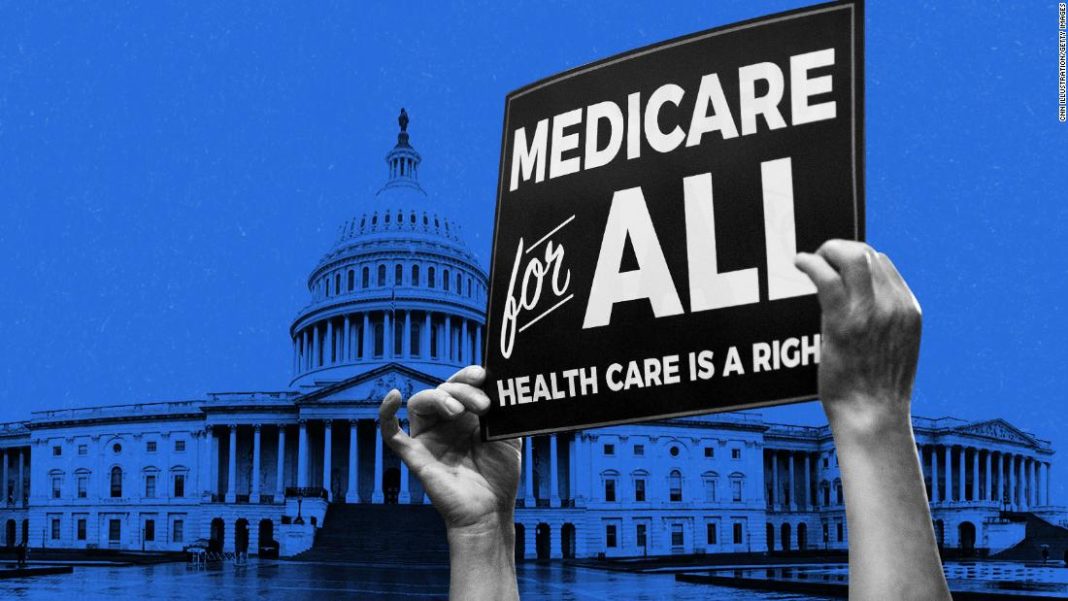 The public debate over health care is heating up across the political spectrum. The majority in society has reached a consensus on the solution, improved Medicare for All, with polls consistently demonstrating support around 70% overall and over 50% among self-identified Republicans. More than 100 Democrats have signed on to Pramila Jayapal’s robust Medicare for All legislation in the House and Bernie Sanders introduced an up-dated version of his bill in the Senate. With a consensus in society and viable legislation pending in both chambers of Congress, why isn’t my Medicare for All card already in the mail?

The short answer is capitalism. Even the most ardent defenders of capitalism recognize there is a problem. The Federal Reserve Bank of Dallas summed it up from the banker’s perspective, “U.S. spending on health care as a share of gross domestic product is well above average for other developed countries, while health care outcomes are much worse than in other developed countries.” While the health-care profiteers in Big Pharma, the health insurance industry and the for-profit hospital corporations and their representatives in the leadership of the Republican and Democratic Parties unequivocally reject Medicare for All, they have not yet reached consensus on their own solution.

President Trump sparked the latest escalation in the debate when his Department of Justice, in a change from previous policy, sided with a Texas federal judge’s ruling that the whole of the Affordable Care Act is unconstitutional. Even in the absence of sweeping “repeal and replace” legislation, the piecemeal attacks on Obamacare directed by the Trump administration are having significant negative effects, raising costs to consumers, increasing the ranks of the uninsured, limiting plan choices and undermining the financial stability of safety net hospitals in rural and urban areas.

Congressional Republicans, still smarting from their losses in the 2018 midterm elections, declined to take up Trump’s incendiary rhetoric and pledged not to consider repealing Obamacare until after they retake Congress in 2020. However, the Trump tax cut they championed in December of 2017 has created real deficits which they will demand be offset with massive funding cuts to Social Security, Medicare and Medicaid. The biggest threats to health care at the federal level will come through the budget process this legislative session, not directly as a new “Trumpcare” plan.
At the state level, Republicans in a number of states are pushing vicious “work requirement” bills aimed at forcing people off Medicaid.

The establishment Democrats are searching for a tweak of the status quo, which they will label “realistic” and “sensible”, i.e. limited enough not to scare off Wall Street but just bold enough to say they tried. This has led them to rediscover the very same “public option” they universally rejected from the original Affordable Care Act in 2010 and myriad versions of “Medicare for a few more” which all have very noble sounding titles but which only shift the eligibility criteria by a few years, offer prescription medications at cost or allow people to buy into their states’ Medicaid plans. While any and all of these would be small steps forward, none of them will come anywhere close to solving the problems inherent in trying to provide a basic necessary service in a for-profit system.

It is clear that Nancy Pelosi and the Democratic leadership in the House want to prevent any vote on Medicare for All. A Politico article from January reports that “a health care messaging guide developed for congressional Democrats by Protect Our Care…is advising Democrats to leave the bigger fights over universal health care for further ‘down the road.’ Corporate lobbies across the health sector, meanwhile, are already lining up to fight any move toward Medicare for All.”

If improved Medicare for All is the clear answer to so many people, what will it take to move it from a good idea to a reality? Teachers across the country have been demonstrating what a decisive role the organized working class can play in forcing change when we fight for bold, popular demands using the powerful methods the working class developed in previous struggles – strikes and mass demonstrations.

The unions working for Medicare for All, most notably the National Nurses United, should set a date for a national day of action and begin to build for it seriously, starting with their own members who can be passionate advocates for patients and health care. Then, this core of unions should issue a public call for other unions to join them and broadcast it widely so that the millions of rank and file supporters of Medicare for All could pressure their leaders to get on board or get out of the way.

Bernie Sanders and a new generation of progressive Democrats who owe their election victories in part to pledging support for Medicare for All like Alexandria Ocasio-Cortez also have a key role to play. They could leverage their political authority with their tens of millions of supporters to amplify the unions’ call to action.

This day of action would be a first but significant step in building what needs to become an organized and cohesive national movement for improved Medicare for All. To win, this movement must be armed with a political analysis of both its own strength and that of the ruling class forces aligned against it. Despite historically low level of unionization in the private sector and a weak union leadership, the U.S. working class retains tremendous potential social power. To transform this potential power into actual power, the Medicare for All campaign would have to take on aspects of both a union organizing drive and an independent political party organizing drive. A leadership developed through this process could wield our massive social power to peacefully disrupt business as usual, including strikes and mass protests in the streets, until Medicare for All is won.