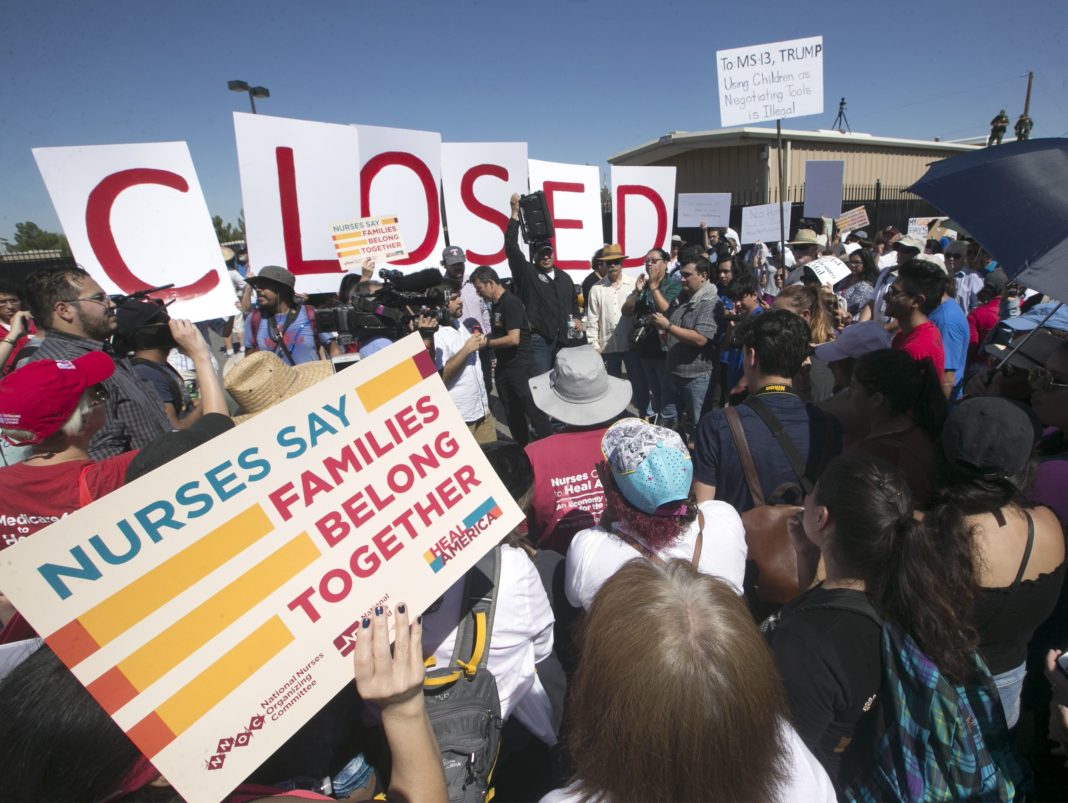 President Donald Trump has continued to ramp up his campaign of terrror against asylum-seekers at the border. After he shut down the U.S. government in a ploy to win funding for his “border wall,” Trump threatened to close the U.S./Mexico border and floated a plan to release detained migrants to so-called “sanctuary cities.” Shutting the border would lead to economic chaos and the ruling class has reacted sharply to this idea.

Meanwhile, thousands, including children, continue to be detained in horrible, desperately overcrowded conditions including 3,500 in El Paso who were herded this month under a bridge, behind razor wire.

For Trump the main purpose of his campaign is political. Whipping up fear of immigrants was a key part of Trump’s campaign in 2016 and in his messaging for the 2018 midterms. Clearly he intends to double down on this as his re-election campaign begins.

Trump and other right wingers claim there’s an “invasion” of immigrants at the southern border. There is no doubt that this is in part a manufactured crisis. When Trump took office, the number of people crossing the southern border, especially from Mexico, was far below the levels of a decade ago. But in recent month the desperate conditions in the Central American countries of El Salvador, Honduras, and Guatemala are leading large numbers of families to make the perilous journey north.

At the current rate, up to one-million people will seek to cross the border this year. Most of them are seeking asylum. Immigration courts already have 800,000 pending cases. Most asylum cases won’t be heard until 2021. But the chaos which Trump rants about actually suits him.

Asylum is a process to get residency in another country because it is not safe for you to stay in your home country due to persecution or other reasons. It is protected under various international agreements even if frequently violated in practice.
There is absolutely no doubt that a large proportion of the families crossing the border are genuinely fleeing violence, persecution, and substantial risk of death. These conditions are a direct result of U.S. imperialism and its policies in Central America.

First, U.S. trade policies ensure that Central American economies serve the needs of U.S. corporations and not the needs of the workers and farmers in the region. Second, the U.S. war on drugs spurs drug production and trafficking in the region, leading to violence and the domination of vicious drug-trafficking gangs over whole sections of El Salvador and Honduras. Third, U.S. political and military interventions greatly destablized the governments and societies in the region over many decades. Finally, global climate change, driven by greenhouse gas emissions in the U.S. and other industrialized countries, drives down farming yields, causing hunger and desperation in the countryside.

Trump sometimes cries crocodile tears about the humanitarian disaster at the border. In reality, as Central American migrants flee deteriorating conditions, Trump uses punitive policies at the border in a political effort to bolster his support in the U.S. At Trump’s direction, ICE decreased the number of asylum seekers processed daily to a figure much lower than the agency’s capacity. This arbitrary restriction fails even to punitively discourage asylum seekers, and creates a bottleneck of fearful families waiting to apply for protection.

In addition, Trump’s ICE detains families, including children, which is in itself a inhumane practice. To make matters worse, these detention facilities are poorly resourced and intentionally over-packed to beyond capacity. This leads to images of crying children behind fences, detained migrants in improvised shelters under highway overpasses, and a generalized sense that migration at the border is out of control and in crisis.

Trump then exploits these conditions even as he is responsible for them, using the situation to justify the repressive tactics and gain support for funding of his border wall. It bears many similarities to efforts by far-right governments across Europe and Australia, who also use repressive tactics against migrants. This is a cynical move by Trump to weaponize vulnerable asylum-seekers for political gain.

A Workers’ Program for Asylum and Immigration

The truth is that the humanitarian crisis on the southern border is caused by our economic system, capitalism, and is made worse by Trump’s callous policies aimed at terrorizing migrants for political gain. Furthermore, only a mass working-class movement, fighting for a fair immigration policy as one component of a wider political program, can defeat Trump’s bigoted inhumane border plans and end the crisis.