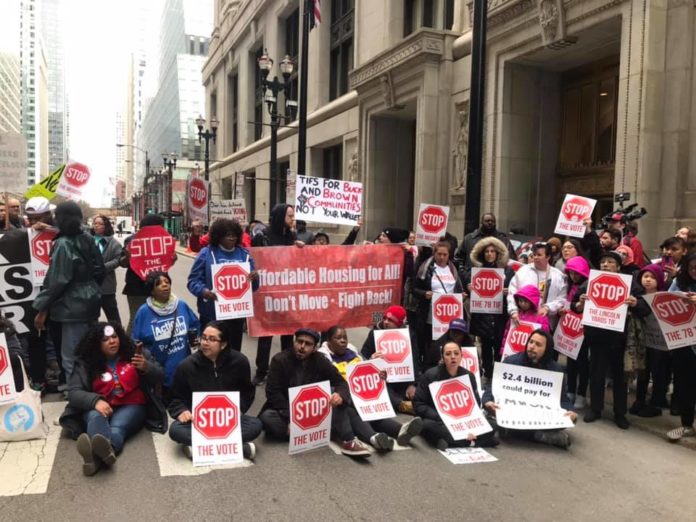 In a fantastic result for working people, at least five self-described democratic socialists and members of the Democratic Socialists of America (DSA) will join Chicago’s fifty-seat city council after a hard-fought runoff election on April 2. Daniel LaSpata, Carlos Rosa, Byron Sigcho-Lopez, Jeanette Taylor, and Andre Vasquez will all take office May 20, with Rossana Rodriguez likely to claim victory after counting is complete. Socialist Alternative endorsed Byron and Rossana, the two campaigns independent of the Democratic Party, but we welcome the victories of all the democratic socialist candidates as well as the defeat of establishment incumbents by other left candidates. Voters overall delivered a total shake up to city politics and a devastating blow to the “machine” that has been the evolving instrument for corporate Democrats’ top-down rule over the city for decades.

The entry of democratic socialists into city council and the defeat of key allies of outgoing Mayor Rahm Emanuel will disrupt the routines of big business’ political domination of the city. The Chicago City Council has traditionally operated as little more than a rubber stamp for the mayor and corporate interests, but now with these victories there is already talk of the formation of a “Democratic Socialist Caucus.” If democratic socialists, as well as other elected left candidates, forcefully bring the issues that many of them campaigned on into the council – like rent control, taxing the rich, an elected civilian police review board, and full funding for schools with an elected school board – it could become the site of sharp conflict with the city’s corporate class.

Democratic Machine Dealt Serious Blow, But Lightfoot is No Alternative

The new left on the council will be contending with a new mayor in Lori Lightfoot. Lightfoot, a former prosecutor and corporate lawyer. She ran as a little-known outsider and will be the first black woman to take the mayor’s office as well as Chicago’s first openly gay mayor. By explicitly running on an agenda of “change” and against Emanuel and the machine, she won a stunning 73.7% of the vote. This was the second-biggest margin in Chicago history and is testament to the depleting power of the city’s Democratic political establishment and the enormous desire for change from the rotten status quo under Emanuel.

Lightfoot defeated Toni Preckwinkle, who was backed by union leaders, and some left leaders like Carlos Rosa, as a pro-working-class candidate. But this was far from the reality of Preckwinkle’s record and, despite her union backing, it was Lightfoot that successfully took on the mantle of “anti-establishment” candidate.

Despite her image, in fact Lightfoot was big business’ preferred candidate in the runoff race. Although she won an overwhelming majority, there was historically low turnout and her election represents more a rejection of the status quo than enthusiasm for any platform. The one element that resonated was her vow to “bring in the light” against corruption. Yet, taking on official corruption on its own will not prevent big business from rigging the system in their favor through entirely legal and official measures. If major unions and left leaders had put forward an alternative to the Democratic Party after Emanuel’s exit from the race last September the anti-establishment mood could have been directed behind a genuinely working-class campaign fighting for a transformative program instead of Lightfoot’s vague self-described “progressive” one, which working people cannot rely on.

At times, Lightfoot may be willing to be out of step with downtown elites, but in her opposition to grassroots demands like rent control and through establishment appointments on her transition team she is already demonstrating that she will largely be friendly to big business.  Her chief financial advisor is rumored to be a Republican corporate lawyer who boosted the slashing of public sector worker pensions.

Whatever her inclination, Lightfoot will be under massive pressure to back a corporate agenda and she has already failed her first big test against establishment and big business pressure. She campaigned to delay approval of $2.4 billion in Tax Increment Financing (TIF) public subsidies to two massive private developments, “Lincoln Yards” and “The 78,” until the new mayor took office. Emanuel agreed to briefly delay the TIF vote, yet Lightfoot ultimately gave the go ahead for the massive handout after the developers made a few unenforceable promises, none of which would do anything to address the underfunding of schools and housing crisis that will be made worse by these developments.

Lightfoot deserves no honeymoon from working people. It is the potential for a fighting democratic socialist caucus on the council, paired with movements of working people, that could be key to win working-class victories in the future. The five, or potentially six, winning campaigns did not run in a coordinated or fully united way and, to achieve victories, more fighting unity will have to be built. Therefore a key question under discussion among supporters now is – what kind of caucus should be developed and what will make it most effective?

Any democratic socialist caucus will be in a stark minority and up against fierce big business opposition. To win gains, the caucus will have to base itself on the power of working people, not on its ability to cut deals with the mayor or other parts of the council. This would mean caucus members using their offices first and foremost to rally working people into struggle and to build mass movements. With this approach, Socialist Alternative’s Kshama Sawant on the Seattle City Council spearheaded the first victory for a $15 minimum wage in the country and other gains for working people, upending the political status quo in Seattle.

The newly-elected democratic socialists have taken an important first step towards a fighting approach. When the Lincoln Yards and The 78 TIFs came up for a vote, many of the democratic socialists, as well as other left aldermen-elect joined the protest in the streets, led by the Chicago Teachers Union, which has fought TIFs for years, and others.

Now that the TIFs have passed, elected democratic socialists should take the lead and demand “No Developer Handouts!” – calling mass demonstrations before inauguration day to cancel the TIFs and demand massive investment in schools and high quality, permanently-affordable, city-owned housing funded by taxing the rich and LaSalle street.

Additionally, a mass rally “For Socialist Policies in City Hall” should be organized shortly after inauguration day to announce united rejection of these rotten deals and politics as usual, as well as plans to fight for the democratic socialists’ campaign programs.

For an Independent Democratic Socialist Caucus, Accountable to Working People

To hold their ground against inevitable business countermeasures, a Democratic Socialist Caucus will have to be able to rely on support from below to back them up on the street. But for working people to be convinced to get involved they have to trust the caucus will unwaveringly fight for their interests and be accountable to movements. It’s an important start that all caucus elected officials will be members of DSA, but if a caucus is founded, structures will have to be set up either in DSA or on a wider basis to which caucus members can more clearly be held democratically accountable to an agreed political program.

However, we in Socialist Alternative disagree with a majority of the elected democratic socialists in their decision to run within the Democratic Party, which is dominated by big business and has no mechanism of accountability or structures that could help build struggle. Even the current Democrats in the Progressive Caucus have not reliably represented working people. The body’s current chair has already dismissed newly elected aldermen as having “no clue that you don’t just find money sitting on the table.”

Working people in Chicago need a new party to fight for their interests. The victory of Byron, and likely Rossana, as independents demonstrates it is not necessary to run with the Democrats to win. If an independent working-people’s party was on hand this past election to run in the mayor’s race and council seats, the election could have shaken the political establishment to its core. A democratic socialist caucus could use its profile to be an active catalyst for the development of a new party, although it does not appear most of the potential members would agree with this approach.

At minimum the caucus should constitute itself as a fully independent force on the council. It would be correct to seek as much principled unity on a pro-working-class basis as possible with other members of the council, especially with the newly elected progressives who have shown their willingness to fight in the street. But unity must not be sought on the basis of watering down its political program, and the unity really needed is with working-class movements not establishment politicians. The caucus would lose much of its fighting edge if it was merely a part of the existing Progressive Caucus.

In the coming weeks and months, debate is likely to continue among working people and organized left forces over how to make use of the new opportunities posed by the election and victory of democratic socialists. Mass meetings and strategy conferences are needed to bring working-class people into struggle and also to discuss and debate how to make use of our strengths to win real gains. If elected democratic socialists united in calling for forums like these, bringing in representatives of the labor movement and social justice movements, it could be a vital contribution to building movements that could transform the city.