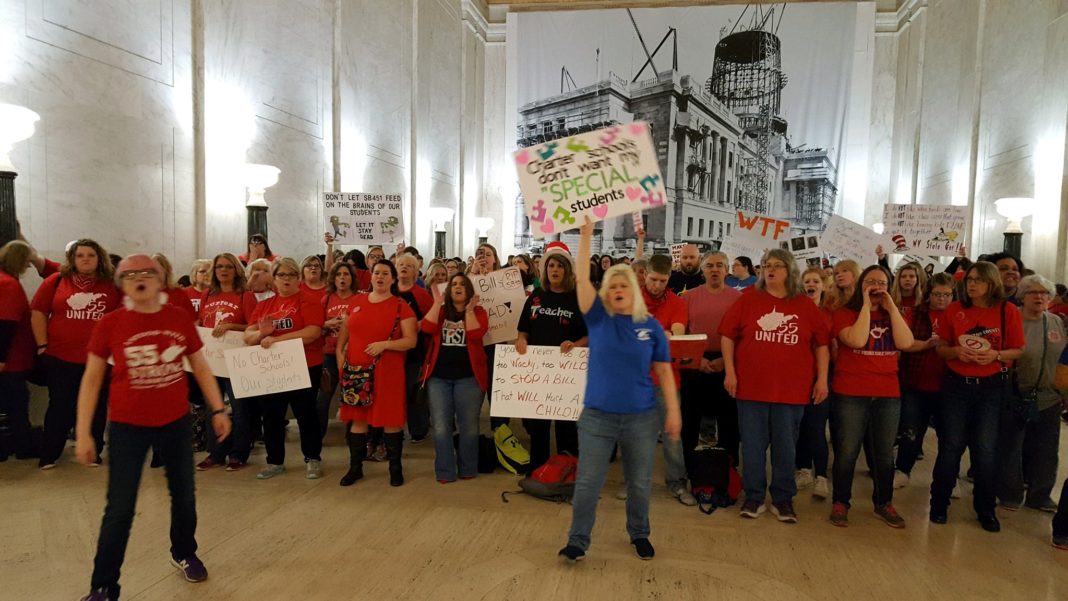 When West Virginia teachers went on strike on February 19 and 20 for the second time in as many years, they were fighting against an “omnibus education bill” that was directly aimed at them. This bill would open the state’s doors to charter schools for the first time. The deal was wrapped up in a sugary package of pay raises, in hopes of coaxing the militant teachers into swallowing the bitter pill without a fight. It did not work.

Teachers showed out to the Capitol in force. While at first glance, the rally may not have been as big as 2018’s demonstrations, this year the teachers were more distributed. While many arrived at the Capitol building to pack the House and Senate, others joined picket lines in Putnam County, the only district in the state whose superintendent refused to close schools. The picket line at the bus headquarters successfully stopped buses from going out that day to pick up students. As one steadfast teacher said confidently to us, “Nobody crosses a picket line in West Virginia. You poke Labor, we poke back.”

Members of Socialist Alternative from Columbus and Pittsburgh traveled to West Virginia in order join the protests in solidarity with the teachers. We listened to the experiences of the teachers, now broadened even further from a second strike, and expressed our support for their struggle. Socialist Alternative member and Seattle City Councilmember Kshama Sawant put out a video statement in support of the West Virginia teachers, as we also prepared to support the striking educators in Oakland. As the strike went into the second day, we joined the deafening cheers and passed out leaflets calling for continued action and supporting the teachers.

West Virginia In the Lead

The nationwide teacher revolt against underfunding of public education and privatization was kicked off by West Virginia teachers last year before spreading to Kentucky, Oklahoma, Arizona, North Carolina and Washington State. This year, striking teachers in Los Angeles won significant gains including a commitment from the district to support a statewide moratorium on charter schools; in Denver teachers waged a successful strike against performance-based pay; and in Chicago, charter school teachers are organizing and striking for better pay and conditions as well.

The active involvement of parents, students, and the wider community has been crucial to this wave of strikes. The Los Angeles strike, in particular, was characterized by huge community support from parents and teachers, with large rallies happening daily to keep the pressure on, demonstrating the instrumental role of solidarity in winning labor struggles. The West Virginia teachers know this well, as some private school teachers called in sick from school in order to join their colleagues in the public sector, and many strikers received messages from students and parents in support.

West Virginia teachers that we talked to knew they made history last year, when their two week strike resulted in pay raises for public sector workers across the state and improvements in classroom conditions. “We started a fire here, and now we’re back for round two,” one teacher, who had been at the Capitol since early that morning, said.

However, many also felt that their victory in 2018 was not decisive, as it did not address PEIA, their state-funded insurance that has been steadily rising in cost. Teachers we spoke to explained that because of the way the raise was calculated, many of them never saw even close to the full 5%, with their insurance costs still steadily rising. “Lots of us never saw a significant pay raise at all, and we have to pay more and more into PEIA,” a teacher said, explaining the desperation around the state’s educators.

Teachers in West Virginia are the underpaid, overworked first responder to all the crises in working class life, from opioid addiction, to poverty, to incarceration, to family instability. The state legislature, this year and last, sought to inflict brutal attacks on these classroom first responders, and the teachers we spoke to were not just determined to fight but sincerely inflamed and infuriated by the injustices brought upon them. Many teachers, some in tears, recounted having to counsel children who had recently lost family members to the opioid epidemic ravaging their state. They told us they were on strike for their students, highlighting their refusal to take a pay raise in return for harming their kids’ education.

“I’m striking this year, I went on strike last year, I went on strike the last time before that in the 1990s,” an older teacher told us. “We don’t have collective bargaining, so everything we do is wildcat by definition.” Teachers we talked to saw themselves as the originators and initiators of the strike action, rather than the union leadership, who were forced by the teachers’ militancy to call the strike.

No Trust In Corporate Politicians’ Promises

The tenacity and determination of the teachers was so strong that, even after the omnibus bill was tabled “indefinitely” on the floor of the House, many still stuck around to make sure the bill would not be revived. “If I thought the bill was truly dead, I would be home,” one teacher said, standing next to her young daughter. They had just watched Governor Justice give a public statement, calling for all the teachers to go back to work and insinuating that they had overreacted. As he spoke, we saw the teachers around us shake their heads, roll their eyes, and scoff at the Governor’s words. They were determined not go back to work until the bill had no chance of being passed.

In West Virginia, a bill can get a “reconsideration” vote, effectively bringing it back from the dead, within a 24-hour period. When strikers got word that the bill could potentially be revived, many returned to the Capitol, and the union leadership responded by calling to continue the strike into Wednesday.

“Defunding public schools is a bipartisan effort,” a West Virginia teacher confirmed, pointing to a crucial lesson teachers are now learning. Most of the beginnings of abysmal pay, and intolerable classroom conditions were initially imposed while Democrats led various state governments.

Bringing the Strike Wave Back Home

While going on strike for the second year in a row shows how dedicated the West Virginia teachers are to defending public education, and demonstrates the strength of union tradition in the state, it also points to the need for a more long-term strategy. Teachers at the Capitol recognized that the corporate education reformers in the legislature aren’t finished and that further escalation tactics will need to be explored beyond striking against every bill that attempts to privatize or defund public education. Socialist Alternative suggests widening out the strike to all public sector workers as well as calling for a nationwide teachers’ strike against privatization.

Several teachers expressed the need for continued union action. “The attack on unions is real. Unions need to maintain solidarity and work together to stay strong,” one teacher said. Before the bill died in the House, the striking teachers were questioning how their action could escalate if necessary. Teachers in the future should be prepared to escalate by appealing to all public sector workers to strike together, or call for a nationwide education day of action.

A New Era for Labor

Labor has been under attack from the Koch brothers and their billionaire friends for decades. Years of “right to work” and open shop legislation has taken a major toll on union organizing, and the Janus Supreme Court case last year represented another attack on organized labor. But the igniting of the teacher’s strikes across the country has demonstrated that workers have the power to overcome these unfavorable conditions and rebuild the labor movement, taking it out of its years of dormancy.

The WVEA played a role in this fight by promptly calling for a strike as soon as it became necessary – but it was a reactive move, responding to the militancy of the teachers who refused to let the threat of charter schools stand. The union leadership has clearly learned a lesson from last year’s strike, when teachers had to go over the heads of the union, who refused to do their job and organize a strike. In 2018 the WVEA leadership attempted to play a mediating role, helping politicians sell their deals to the teachers, but the West Virginia teachers wouldn’t let them.

“I remember [last year] we were chanting, ‘Judas, Judas, Judas,’” a teacher at this year’s strike reflected. “We wouldn’t let them get away with it.”

In order to create a long-term strategy that prevents the continuing attacks on public education and workers, unions must lead from the front, be unafraid to strike, put forward strong demands, and take their rank-and-file on the offensive to win reforms that significantly improve the lives of workers. Instead of being content to lobby for Democrats, unions should run their own independent candidates, free from the influence of corporate money, to represent workers’ interests. Such independent candidates should form the backbone of a new political alternative, not just for teachers, but for all of West Virginia’s working class. A new, independent, working-class party must necessarily reject corporate money and as well as fight for fully funded quality education and universal health care, including public addiction treatment centers, and a green jobs program that can transition workers from mining to environmentally friendly work.

The West Virginia teachers won a significant victory against the political establishment that sought to punish them and their union activity. After sticking out the strike for a second day, the bill was never reintroduced into the House and never got a re-consideration vote. Even after a round of strikes across the country, the originators of the wave in West Virginia are still setting an example of what solidarity and working-class organization look like.

Public education has long since been an institution in the United States, but based on how it has been unilaterally under attack for decades, one wouldn’t think that was the case. Teachers shouldn’t need to put their jobs on the line in order to protect the idea that every child deserves an education. But the logic of capitalism treats students like commodities on an assembly line – is it any surprise capitalists want to privatize and make profits off it? Under this unrelenting capitalist system, public education will always be under attack from the interests of profit. We need a system not controlled by the whims of billionaires and their profits, where education would be controlled by working class communities. Such a system would use the resources of society for the good of everyone, not just the super rich – in a word, it would be socialist. The example of the West Virginia teachers showed once again how much must still be won to make education work for all, but it also powerfully demonstrated the kind of action we can utilize to win it. With independent, working-class action, a socialist world can be won.