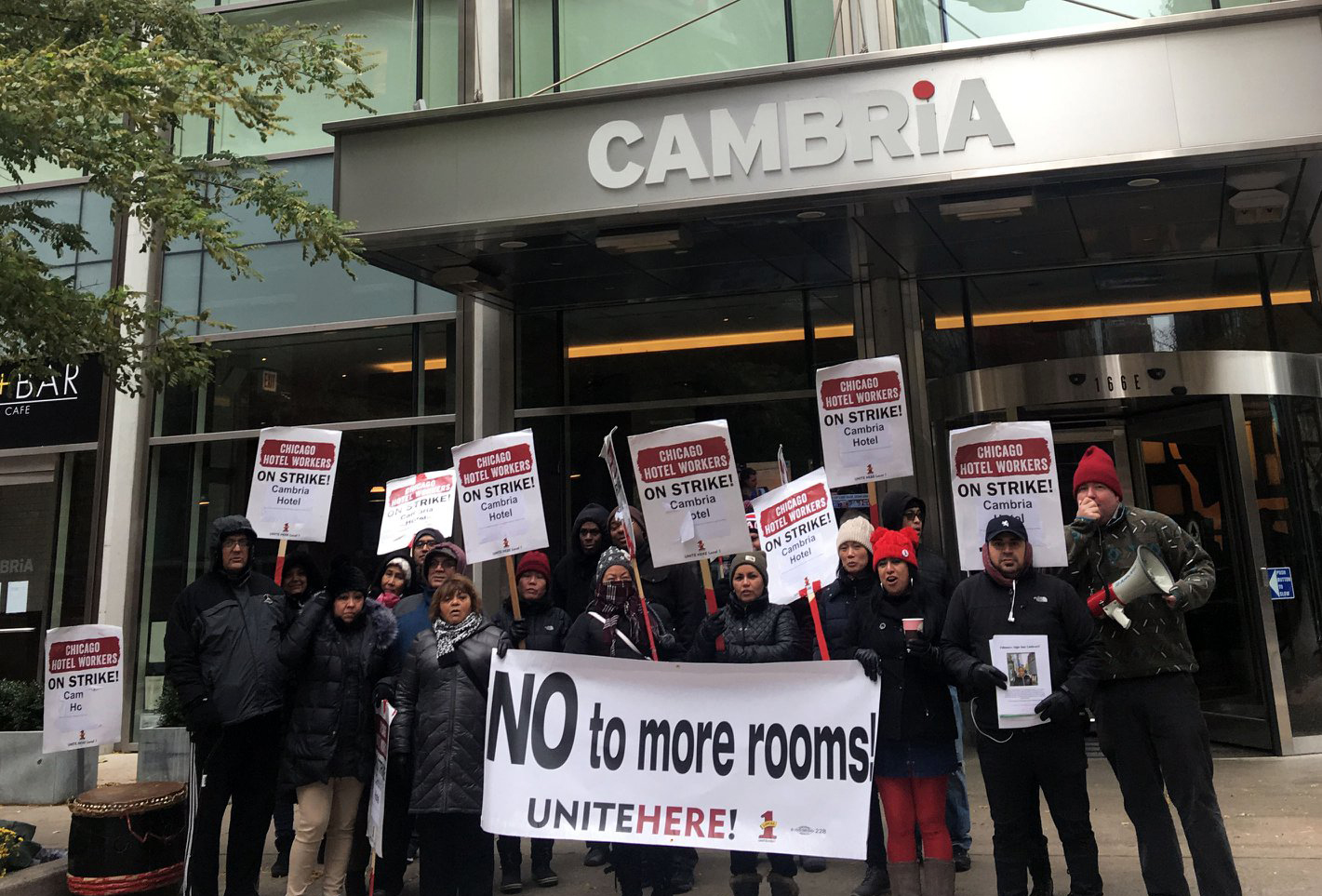 The historic citywide strike launched by 6,000 hotel workers in Chicago in September is now down to only one hotel after workers ratified contracts at 25 other locations, winning key demands of year-round health care and across-the-board annual wage increases.

According to a copy of the tentative agreement provided to workers employed at Marriott hotels, full-time employees of the hotel chain will receive raises totaling $4.50 an hour over the life of the 5-year contract. In addition, full-time employees will be guaranteed health care for the months of December, January, February, and March. Prior to this new contract, many workers would lose their health care during these months as a result of seasonal layoffs. UNITE HERE Local 1, the union coordinating the strike, has made year-round health care its central demand.

In addition to winning these victories, the hotel workers successfully fought off anti-worker demands made by management, such as heavier workloads for housekeepers and increased health care costs.

At the Hyatt chain, management prolonged the strike by insisting on adding union-busting provisions such as allowing managers to perform bargaining unit work. The union correctly responded by escalating the strike. They organized several mobilizations at Hyatt-owned hotels, involving hundreds of workers and supporters. Following these actions and after nearly four weeks on strike, Hyatt finally backed down and settled a contract.

The hotel strike has now spread to at least eight other cities across the country, as Marriott workers in Boston, Detroit, San Francisco, and Maui all walked out in recent weeks. The rallying cry for these workers, “one job should be enough,” highlights the struggle of working people to survive on stagnating wages, while landlords and insurance companies continue to demand higher and higher payments in exchange for the basic necessities of housing and health care.

The strike has also taken on an international element: housekeepers at the Park Hyatt in Paris, France have gone on strike in protest of the hotel using subcontractors to avoid paying decent wages.

“I think it is very inspiring to see hotel workers across the globe standing together and demanding respect at work“, union steward Don Lydon told Socialist Alternative. “It feels great to know we are a part of a global labor movement fighting for respect on the job.

The expansion of the hotel strike is yet another sign, following the explosive teachers’ strikes earlier this year, that workers nationally are starting to fight back against decades of attacks. It also demonstrates what can be achieved when union leadership encourages their members to fight back.

The solidarity shown among fellow workers and labor unions is also encouraging. Reports have come in from around the country of union members standing in solidarity with hotel workers, refusing to cross the picket lines to deliver food, packages, or other services to the hotels. This unity among working people is critical for achieving victory.

The Cambria Magnificent Mile hotel in the city’s downtown is the last holdout of the Chicago strike, after 25 other hotels signed agreements with the union in recent weeks. Cambria management has refused to sign a similar agreement, insisting on unacceptable concessions such as increasing the already too heavy workload of housekeepers and weakening the union’s grievance procedure. The workers have rightly rejected these proposals and remain on the picket line.

As the strike drags on, hotel management and the political establishment have grown bolder in their attacks on workers. Hotel management has repeatedly called the police on strikers, citing noise violations. The police have complied, harassing strikers on a regular basis, issuing tickets and even threatening arrests.

In response to these attacks, the union made a temporary retreat, reducing the noise level on the picket line and refraining from mass actions or rallies. Meanwhile, union lawyers filed a lawsuit against the city, seeking permission from the courts to resume regular activity. In recent days, the union has slowly resumed their escalation, organizing a picket of about 100 workers last Thursday.

Whatever the outcome of the lawsuit, the power to win this strike remains with the workers, not with the courts. The West Virginia teachers, who went on strike earlier this year, won their demands despite the strike itself actually being illegal! This demonstrates the power of working people to achieve victory even against the legal threats of the state.

A victory at the Cambria is both imperative and within reach. With the vast majority of union members back at work, the union could concentrate the full weight of its resources to win this fight. This would mean organizing pickets of thousands, including union nurses, teachers, construction workers, etc. which would send a message not just to Cambria but to the whole city establishment: working people will not back down.

As this strike continues to develop nationally, and as other workers consider strike action in the coming months, we must remember the central lesson in the history of workers’ struggles: our power lies in militant and united action, disrupting the profits of the bosses of society. Workers never won anything without a fight.

Every victory matters. The fight in Chicago must be won and carried forward across the country and across the world. Hotel workers need solidarity from working people and their communities. We urge everyone who can to join the picket lines at striking hotels to help deliver this victory and to rebuild a foundation for a fighting labor movement.