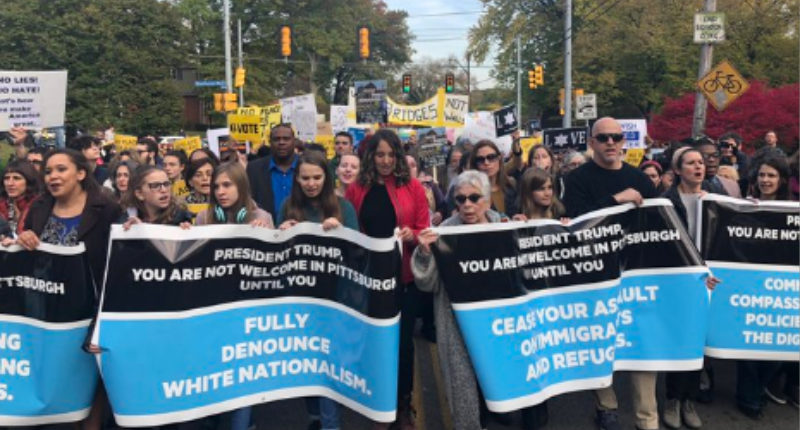 On Tuesday, October 30, after this article was first published, Trump visited Pittsburgh. Tens of thousands gathered in Squirrel Hill to protest Trump, even diverting his motorcade. The main message of the organizers was “Words Matter” pointing out Trump’s encouragement of racism, homophobia, and violence. Other signs included “President Trump, you are not welcome in Pittsburgh until you stop targeting and endangering all immigrants” and “Trump, you have blood on your hands.”

On Saturday morning, October 27, a man shouting anti-Semitic slogans opened fire at the Tree of Life Synagogue in the historically Jewish Squirrel Hill neighborhood in Pittsburgh. Eleven people were killed during the morning shabbat service and during a bris, a ceremony welcoming a baby to the Jewish community.

This horrific shooting is part of an unmistakable, steady rise in the expression of open anti-Semitism, xenophobia, and white supremacist ideology in the United States, albeit by a small minority. This trend has accelerated since 2016 and the election of Donald Trump, and is linked to an increasing number of hate crimes against religious minorities, LGBTQ people, people of color, women, immigrants, as well as activists and other targets.

Trump’s response to this recent hate crime in Pittsburgh has been to blame the victims, to argue that arming your place of worship to the teeth leads to “far better” results. However, terrorist acts such as this are enabled and encouraged by the attacks on working and oppressed people by Trump and by his far-right supporters. They are a logical extension of the anti-Semitism, white supremacy, and other hateful ideologies perpetuated by the ruling class for centuries to divide and pit ordinary people against each other.

The corporate media and the right wing are seeking to paint the left as the source of anti-Semitism. Kellyanne Conway blamed “anti-religious sentiment” for the Pittsburgh attack. Activists who oppose the Israeli government’s oppression of Palestinians are given the label of anti-Semitic. However the Pittsburgh shooting shows that anti-Semitism comes overwhelmingly from the right wing. Trump bears responsibility for enabling anti-Semitism. It is not anti-Semitic to oppose the policies of the Israeli government and we reject those claims as well as the fraudulent attacks on Jeremy Corbyn, the leader of the British Labour Party, of being “anti-Semitic.” Historically, it is the working class and socialists that have fought anti-Semitism and fascism.

While many of us may be shocked to see the diseased ways of thinking of the past century flare up again today, this kind of rot in our world today is present because of the same decaying social system that gave rise to the horrors of the 20th century including two world wars, fascism and the Holocaust. Capitalism rests on a foundation of genocide and oppression, and feeds on racism, sexism, and xenophobia in order to divide and disenfranchise us while delivering prosperity to a wealthy minority. To crush anti-Semitism and white supremacy, we must not only defeat the dangerous ideology of the far-right, but also dismantle the system which gave rise to it.

While Trump pursues a pro-corporate agenda designed to further enrich the big-business elite, he distracts from it by sowing division and stoking fears along lines of race, immigration, and religion. This right-wing populism is a feature of politics in many countries as big business continues with brutal attacks on workers’ rights and funding for social services, even as the vast majority of the “recovery” since 2008 has gone to the richest 1%.

Trump’s recent embrace of his “nationalist” label is incredibly telling. His victory in 2016 which was based in part on fomenting open racism, xenophobia, and misogyny clearly emboldened the most despicable elements of the far-right. This culminated in the white nationalist mobilization in Charlottesville, Virginia in August 2017, which resulted in the death of Heather Heyer. The far-right was delivered a serious blow by the protests at Charlottesville and after, showing that mass movements are effective against their hate.

Another World Is Possible

We cannot limit our resistance to the ballot box; we cannot rely on the corporate-dominated two-party system to stand up for all working and oppressed people. The Republican Party enables anti-Semitism, racism, homophobia, and xenophobia when not outright stoking it, while the Democratic Party offers little resistance to the right’s vicious agenda. In fact, their failed centrist, establishment politics of the past several decades have been the soil in which right-wing extremism has taken root.

There is a growing mood to fight back against racism, sexism, and homophobia. Recent struggles like the McDonald’s workers’ strike against sexual harassment and the millions led by high school students who walked out against gun violence this year show that more and more people want to fight through collective action.

The solidarity vigil held in Pittsburgh on Saturday brought out 2,000 people and was called for and led by high school students in the neighborhood who felt it was important to act immediately. As socialists we’re incredibly encouraged by this, and fully believe that a mass movement of people standing against the rise of bigotry and far-right violence can win.

The most effective way to fight the far-right is not through isolated actions or street fighting, but through mass mobilizations against them. The response in Boston to the Charlottesville massacre – a demonstration of over 40,000 that shut down and drowned out an alt-right “free speech” rally – pushed the far-right back into internet forums. Unions and anti-racist organizations have a critical role to play in mobilizing the broadest forces possible against the far right and their hate-filled agenda.

The same mobilizations are needed to fight back against Trump and his agenda. On Tuesday, he plans to visit Pittsburgh, and will surely be met with large demonstrations of people who refuse to allow him to twist this tragedy he helped create for his own purposes.

As society continues to polarize amidst a deepening social and political crisis, we must build mass movements of working and oppressed people; we must unite in the streets, on campuses, and in our workplaces against racism, sexism, xenophobia, and anti-Semitism. The Muslim community of Pittsburgh has already set a powerful example of solidarity through fundraising for Tree of Life and offering support and protection to the congregation going forward.

Socialist Alternative stands in solidarity with the Tree of Life congregation and the Jewish community. We must do everything in our power to shut down this system that encourages white supremacist violence.