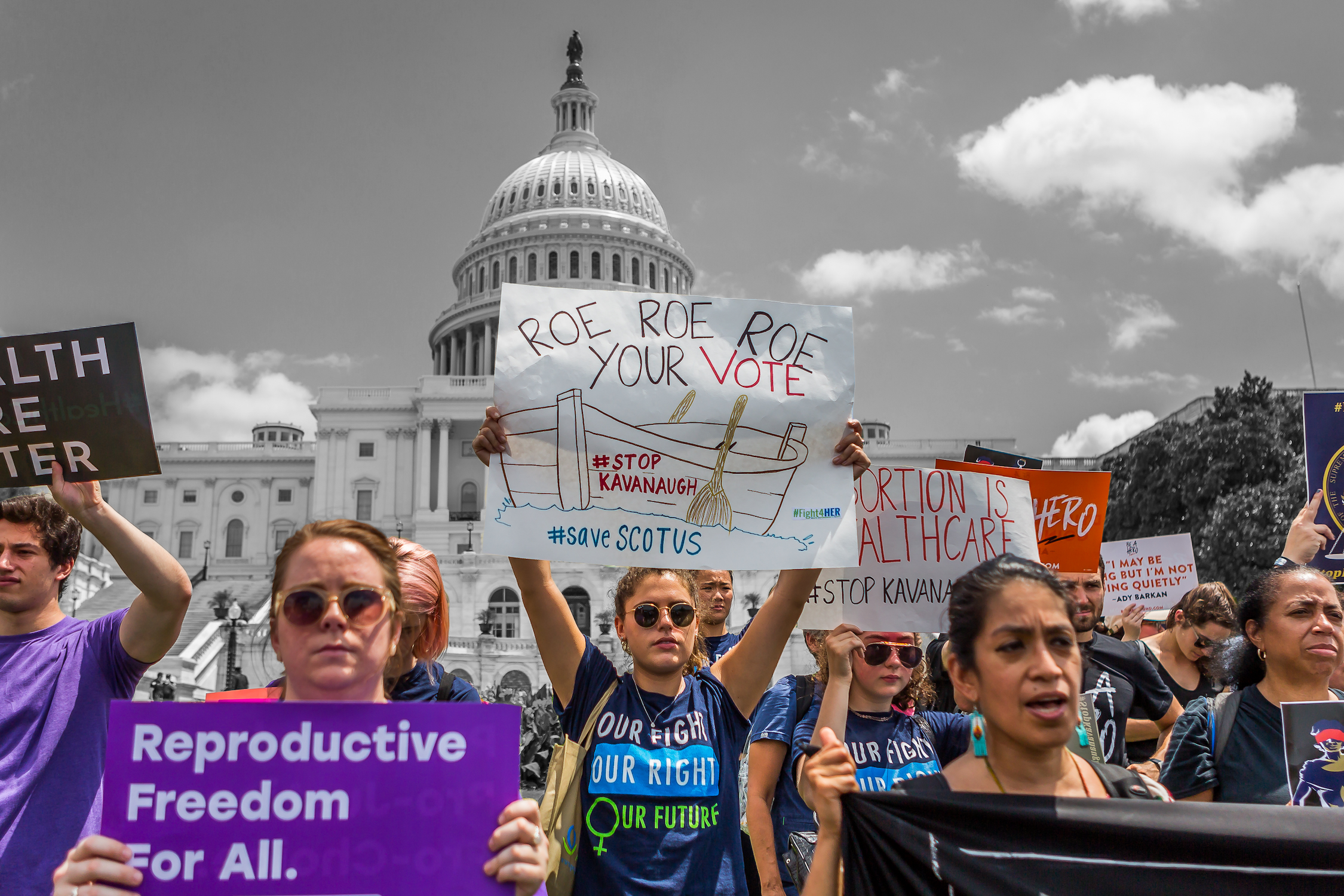 The background of the current midterm elections is a chaotic situation for U.S. capitalism – an out-of-control dysfunctional regime in the White House and a growing political radicalization in society, starting first among young people but beginning to spread its way into sections of the working class. As we explain on in our article about the labor movement, there is a significant increase in strikes and strike authorization votes this year – following the heroic example of the West Virginia teachers – by workers who want to push back against corporate power and stagnant wages.

The most recent manifestation of the radicalization and willingness to fight is the ferocious mass opposition to Brett Kavanaugh’s nomination to the Supreme Court which has forced the Republicans to make a concession by ordering an FBI investigation into the accusations of Christine Blasey Ford and other women.

Looming in the background is the threat of a major economic crisis fueled by massive levels of debt and overheated financial and housing markets, among other factors. The exact timing of the downturn remains unclear but the crisis of “emerging market” currencies, including Argentina and Turkey, show how developments in the world economy could contribute to pushing the domestic economy over the edge. The worsening trade war with China could also be a factor. Now there are indications of a slump in the housing market as ordinary people, whose wages have stagnated while profits have soared, cannot afford escalating prices. The next economic crisis will further exacerbate the contradictions in society, making it even more difficult for the American ruling class and traditional two-party establishment to govern in the old way.

As we go to print, trends point toward a significant “Blue Wave” nationally with the Democrats likely taking control of the House, some state houses, and possibly, though less likely, the Senate. Though Trump’s hardcore base of support still remains largely unmoved and even hardened by “Russiagate,” millions of working people will be looking to the ballot box as the key way to push back against the whipped up racism, nationalism, and chaos.

Many places across the U.S., like New York, experienced record-breaking voter turnout in the primaries. In addition, reflecting the new #MeToo era, there were a record number of successful women candidates for major parties the bulk of them Democrats – 256 in congressional races and 16 in governors’ races. There are also over 500 teachers running as political candidates on the back of the teachers’ revolt against neoliberal assaults on public education.
There have also been a number of key victories in the Democratic primaries by progressive challengers to the establishment. However, these challengers do not represent any sort of cohesive ideological bloc. They range from Democratic Socialists of America members like Alexandria Ocasio-Cortez and Julia Salazar in New York to Ayanna Pressley in Boston who adopted a Berniecrat program but has a record as a mainstream Democratic city councillor.

If Bernie Sanders had adopted the approach – which we advocated – of turning Our Revolution into a membership organization which built a movement in the streets as well as at the ballot box, a far bigger challenge to the corporate Democratic establishment could have developed in 2018. Of course the resistance from Schumer and Pelosi would have been ferocious and this would have pointed more clearly towards the need to break from the Democrats altogether and establish a new party. In this sense, 2018 was also a missed opportunity but the dynamic points to a sharper conflict between the corporate leadership and the radicalizing base in the next period.

Despite the limitations, these primary and likely subsequent general election victories for many left and socialist candidates represent a significant development. Socialist Alternative called for votes by registered Democrats for both Ocasio Cortez and Salazar and we were active in their campaigns. Despite our disagreement with them running within the Democratic Party, a victory for these open socialists with their large, active support base standing on a pro-working-class program would represent an important defeat for the establishment.

Furthermore, their campaigns have the potential to be lay the basis for a wider struggle for key demands like Medicare for All, abolishing ICE, and tuition free college. We also pointed out that, if victorious, they would come under fierce pressure by the establishment to moderate their policies. In order to counteract this pressure they will need to use their positions to help build and be accountable to a sustained movement of working people as Socialist Alternative member Kshama Sawant has done for the past five years as a Seattle city councilmember.

Another significant development has been the emergence of a new wave of black progressives winning primaries including former NAACP head Ben Jealous in Maryland and Andrew Gillum in Florida. This reflects the political shift in the black community since the 2016 Democratic primary, when over 70% of the black vote went for Hillary Clinton. However, young African Americans, affected by Black Lives Matter, had no enthusiasm for Hillary and have largely rejected the traditional black leadership in the Democratic Party.

It is completely understandable that millions of people are looking to the midterm elections as a way to punish and push back Trump and the Republicans. Indeed if the Democrats win control the House and some state legislatures this could open the door to a ramping up of popular resistance against Trump and his right wing cronies. Both in Congress and at state level, Democrats will then be tested, coming under pressure to resist the attacks of Trump and the Republicans and to pass progressive legislation.

Big struggles spearheaded by women, young people, and sections of the working class could push the Democratic leadership beyond what it wishes to do around health care, immigration, impeachment, and other issues. Already there is a debate about whether Pelosi should be Speaker of the House for the Democrats after elections or should step out of the way.

However to achieve what’s possible in the next period, it will take turning the programs of left progressives and socialist candidates into real fighting campaigns around different issues like Medicare for All, as well as constructing a cohesive, organized force to fight for them. Ocasio-Cortez and DSA in particular could play a key role in this process though (as we explain here) like Sanders, this is far from certain and will require sustained pressure from her supporters.

Any sort of move in this direction will immediately come into collision with the Democratic Party leadership and expose the limits of trying to “reform” the Democrats into a party in the interest of working people. The Democratic Party establishment showed its teeth in its vicious and unsuccessful campaign against DSA member Julia Salazar in New York. They will try to co-opt some of the new left elected officials and may be forced to tack a bit to the left but they will also fight ferociously to keep the party as a tool of corporate rule.

This process will continue to play to out in the 2020 presidential primary. In reality, the presidential campaign will begin the day after the midterms. On the Democratic side this is not likely to be a simple repeat of the 2016 Hillary vs. Bernie battle, with a host of Senators and others being named as possible candidates. Nevertheless the battle between the new left and the “centrist” corporatists will be very much reflected in the presidential primary. As in 2016, opportunities can open up to make the case for independent left politics in a way that will resonate with millions.

This inevitable confrontation poses big questions for organizations like DSA who argue the “inside/outside” strategy is viable and portray this as a question of being “pragmatic.” But in order to develop a decisive challenge to corporate power, the only possible way forward is an independent mass party based on the interests of the working class alongside a fighting labor movement and other mass social struggles. Even initial moves in the direction of independent left politics by significant figures and forces would have an electrifying effect on millions of people who hate the establishment, want to fight to change society, and are embracing the idea of socialism.

The mood exists nationally and internationally for a serious push-back against the right-wing agenda but as Bernie Sanders himself pointed out in his recent call for a new “international progressive front” maintenance of the status quo at any level is not a viable basis for progressive politics. 2019 will be full of opportunities that progressives, activists and socialists need to seize upon to fight for real systemic change.