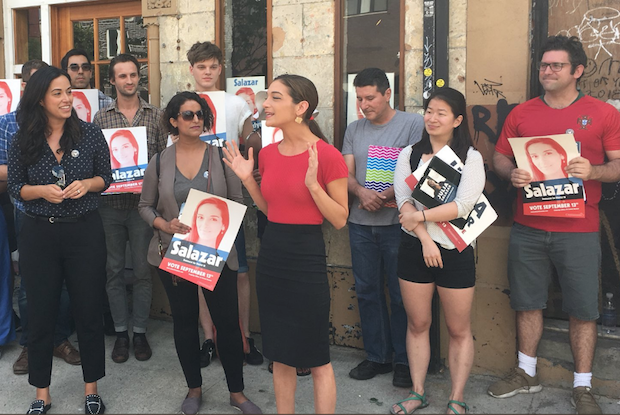 On September 13, New York saw the biggest voter turnout for a Democratic primary in more than two decades providing further evidence of a “blue wave” coming for Trump this November. At the same time, the primary also showed the potential for socialists and progressives to gain ground. Most importantly, over 20,000 people voted to send Julia Salazar, a member of the Democratic Socialists of America (DSA), to the New York State Senate.

Salazar’s campaign which called for passing Medicare-For-All, stronger rent laws, an end to cash bail, and funding public transit, received a massive boost after another DSA member, Alexandria Ocasio-Cortez, defeated another establishment Democrat in the primary for Congress in June.

Volunteers knocked on over 100,000 doors to win this victory. This energy shows the growing opportunities to build the socialist movement. The burning need right now is for Salazar and the DSA to seize the openings from the momentum of this victory to help build a movement in 2019 to compel the state legislature in Albany to pass the progressive legislation working people need as well as building real resistance to Trump and the right wing agenda in Washington. We are proposing to DSA:

Nixon Loses but So Does the IDC

Meanwhile, in the highly publicized gubernatorial primary, Cynthia Nixon who also ran on a left platform and declared her support for socialism during the campaign, lost to Governor 1%, Andrew Cuomo. The turnout was nearly three times that in 2014! This reflects how low turnout has been but also a much more politicized atmosphere.

Nixon’s 34% was impressive but also left many disappointed given the apparent momentum and high expectations. In fact her vote total would have beaten Cuomo in 2014. Reflecting the pressure from below, Nixon was pushed to the left during the campaign. For example, at an early stage she made a negative statement about role of the NYC subway workers’ union in the shocking decline of the transit system but later stood unapologetically for workers’ rights to fight back, including calling for giving public sectors the right to strike in New York State and repealing the anti-strike Taylor Law. She also campaigned for strong rent laws, fully funding transit, fighting racism, ending mass incarceration, fully funding schools, and more.

Cuomo lost no time in declaring that his victory proved the left wave was non-existent, “not even a ripple”. While the establishment was clearly relieved, you don’t have to look hard to see that there is actually a significant political shift underway.

For one thing, Cuomo’s victory was the result of a scorched earth campaign where he took no chances. On the one hand he tacked to the left, adopting a couple of Nixon’s proposals and with a constant emphasis on his opposition to Trump. But he also took every opportunity to undermine Nixon’s candidacy and bully his way to governorship. He put pressure on unions to split from the Working Families Party, who endorsed Nixon. And in the last weeks a Cuomo flyer claimed that Nixon holds anti-semitic views. Cuomo’s massive warchest, fueled by corporate money, as well as a shameful support from labor-union leaderships, ultimately overwhelmed Nixon’s campaign.

The other significant development and a real blow to Cuomo was the defeat of former IDC (Independent Democratic Conference) Democrats. The IDC was a right-wing Democratic faction who caucused with state Republicans in the state senate and helped block progressive legislation. Cynthia Nixon’s campaign and others launched an offensive that forced Gov. Andrew Cuomo to negotiate an end to the faction earlier this year. But the will to punish them resulted in six out of eight IDC senators losing their seats.

The massive turnout for the primary and the defeat of the IDC incumbents points to the possibility of the Democrats retaking the New York State Senate this fall and giving them total control of Albany. There are real hopes that progressive legislation, such as the NY Health Act will then go to Cuomo’s desk. However, many recent experiences show that electing Democrats in no way ensures progress given the corporate control of the party. Strong Democratic majorities in California were not enough to pass single-payer in 2017 and the legislation was killed by establishment Democrats.

Left to their own devices, the NY Democratic machine can sabotage any progressive legislation through various means. Salazar should use her platform to warn her supporters not to rely on the corrupt political process. As Nixon pointed out in her campaign, “if Washington is a swamp, Albany is a cesspool.” What is needed is a systematic mass movement on the streets, in the workplaces, and on campuses, to help mobilize tens of thousands of people to demand change.

Nixon could also continue her race for governor on the Working Families Party line. She has not as of now announced what she intends to do. If Nixon and the WFP were to use this to launch a truly independent political force in New York politics it would be an enormous step forward. It would help to galvanize a significant section who want to fight for the platform she stood on against the corporate elite. This would also mean that the WFP would have to renounce supporting any candidate who receives corporate money as they supported Joe Crowley who was defeated by Alexandria Ocasio-Cortez. It is unfortunately unlikely she will go down this path. If she doesn’t we would advocate a vote for Howie Hawkins of the Green Party as a way to register a left vote this November.

Socialist Alternative members were active in Salazar’s campaign, while putting forward proposals for using the campaign to help build a mass movement for healthcare, taxing the rich, and fighting for affordable housing. We did not agree with Salazar’s decision to run as a Democrat and the reported 1,883 volunteers who were active in the campaign confirms our view that it would have been entirely possible to run a viable independent campaign as part of preparing the way for a new party. But while disagreeing with Salazar on some issues, we also saw this campaign as an expression of tens of thousands of people who are ready to fight back against the billionaires and their hired politicians from both Republican and Democratic parties.

The highly publicized and coordinated smear attacks on Salazar in the last weeks of her campaign should be seen as a serious warning. The forces behind the Democratic establishment will go to great lengths to reign in any challenge to their power. If socialist candidates and elected officials such as Ocasio and Salazar, as well as other left insurgents across the country, do what is needed and begin organizing working people on the ground, then this will inevitably put them in direct collision with the Democratic Party establishment.

Ultimately, our movement will need our own party, independent from the corporate Democratic Party and based on building mass struggles of working people. The terrain is open to start taking steps toward such a party. Nixon and Salazar, as well as Ocasio, Bernie Sanders, and others, have shown that millions of people are ready to support campaigns based on pro-working class platforms. Launching a new mass party of working people is a necessary step to  begin to challenge not only politics as usual, with its corruption and weakness in front of the right-wing, but the capitalist system of exploitation and devastation itself.