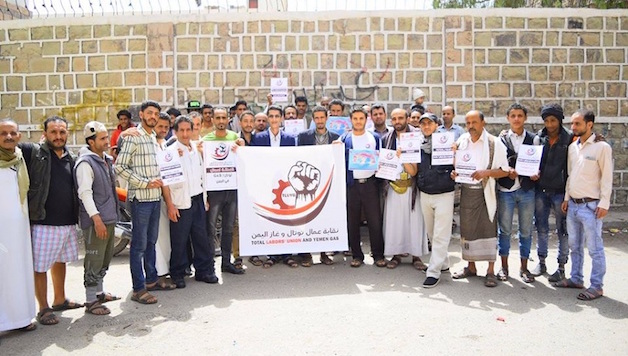 Interview with Ahmed Ali Al-Qidani, on behalf of the Total Gas Labour Union of Yemen

The interview below describes the conditions surrounding the recent decision, by over a hundred workers in Yemen, to set up a new trade union organisation. This follows these workers’ experience of ruthless exploitation and robbery by two multinational companies, TOTAL and G4S. (for more background on this dispute, click here)

As this interview was being conducted in early September, protests were raging in several parts of Yemen against the mounting economic catastrophe inflicted upon millions of workers and poor, amidst a relentless, three-year-old criminal war that is ravaging lives and infrastructure alike.

The Yemeni currency has recently hit its lowest level ever, pushing prices of basic commodities to new heights, and compounding an already horrific humanitarian disaster. Food prices are up by an average of 68% since 2015 – a figure highlighting the economic misery that the war has brought on its way. This is in a country where over half of the population is now unemployed, where most public servants have not been paid their wages for about two years, and where millions of people are haunted by the spectre of widespread famine and epidemics.

Meanwhile, more innocent blood is being spilled every day in the interests of reactionary and imperialist forces’ designs. Saudi Arabia and the United Arab Emirates’ large-scale operation against the seaport of Hodeidah, the main entry point of goods and aid in the country, could result in “one of the worst hunger crises in living history” according to the UN. Trump administration’s recent statements that the Saudis are “making every effort to reduce the risk of civilian casualties”, at the very same time as mass starvation is being used as a deliberate weapon of war by the Saudi regime, has shown yet again US imperialism’s cynical complicity in the current carnage.

Starting on 2 September, the recent protests erupted in areas controlled by the Saudi and Western-backed government, like in the port city of Aden, but also in areas controlled by the Houthis, like in the capital Sana’a. Albeit limited in scale, this protest movement highlights the potential and need for a struggle that can unite the workers, unemployed, and poor people around their own, independent class demands across the country, to end this barbaric conflict and the impoverishment and starvation policies pursued by all the war belligerents. This starts with the Saudi regime and its western allies, whose crushing superiority in firepower make them primary responsible for the country’s descent into collapse.

The revitalisation of the labour movement, and the crucial need for international working class solidarity with the Yemeni masses, is an essential part of this battle. In such a context, the creation of a new and fighting trade union, such as the one described in the interview below, takes on particular importance. The CWI salutes this initiative and will continue to report on these developments, as well as on the TOTAL and G4S workers’ years-long battle for justice.

Recently, the Total Labour Union Gas of Yemen, a new trade union organization, was established in Sana’a. Can you explain what are the goals of this union, and why it was created?

The goals of the union are to defend all the workers’ material and moral rights by all means, to establish a culture of trade union education and intellectual advancement of the workers, and to protect the members of the union from any abuse.

We want to work for justice, equality and against all discrimination, to promote and develop relations of acquaintance and joint work between our union and militant Arab and international trade union entities and relevant workers’ bodies, at home and abroad.

Past attempts by tribal leaders to hijack our struggle have made us particularly aware of the need to develop the principle of teamwork and collective leadership. And, of course, we want to develop and coordinate the struggle to obtain justice for the workers of TOTAL/G4S.

From my personal point of view, the establishment of the union came as a result of continuous experience and struggle since the beginning of my working life, where I was subjected to many injustices and discrimination in my work, which led to the development of awareness to fight until we achieve justice for all workers.

How many workers belong to the new union?

The number of members is currently 150.

Have you got any plan to broaden it out or to link up with workers of other sectors, and what are your relations with the official trade union federation of Yemen? What did the latter do to assist you in your struggle against the robbing companies?

Unfortunately, the General Federation of Yemeni Trade Unions has become largely ineffective and in paralysis, and its role is limited to “advice and solidarity”, sometimes producing a statement. On the issue of the workers of TOTAL/G4S, the workers held a demonstration in front of the headquarters of the General Federation of Yemeni Trade Unions in Sana’a already on 13 April, 2016. Their response and interest in our cause has been very weak, and in the last period has been next to none; although simple efforts have been made by some trade unionists.

This being said, our union has been registered within the framework of the General Federation of Yemeni Trade Unions. We hope to use our new union organisation as an instrument to influence the broader trade union movement in Yemen, and make links with workers in other sectors. We have a plan under discussion to try and build the unity of workers and trade unions in the oil sectors and security companies, in Yemen and abroad.

What do you think are the main reasons your dispute with TOTAL and G4S has still not been settled?

The two companies are the main reasons for the fact that this dispute still hasn’t been settled. In more detail, this relates to:

What are your main demands?

All the workers’ rights and entitlements shall be paid and approved by the workers from the date of their employment until the date when the workers will receive these rights and entitlements. This comprises of unpaid wages, allowances, bonuses, vacations, overtime working hours, social and health insurances, supplements for Ramadan, workers’ risk allowances, … Furthermore, we demand compensation for the families of the martyrs as well as compensation for all the material and moral damage inflicted on all the workers. We want the re-employment of the workers if there is a return to activity by these companies – or proper severance pay for the termination of our contracts. We want this to be done through accredited lawyers and litigants, and the follow-up and supervision of our case through the ITUC (International Trade Union Confederation) along with the CWI.

What is the mood and spirit of the workers at the moment?

We, the workers, are in a very difficult situation that we have never experienced before; that is, 3 years of injustice, oppression, neglect and manipulation of our fate. Three of our colleagues were killed without any mercy and the families of these martyrs were ignored and left without any help. Most of the workers are unemployed and some were forced to sell their belongings or property.

Most companies refuse to employ us until we get the official dismissal notice from the company we worked for. Because of that, in order to provide a living for their families, some workers are being exploited by the owners of a phantom company which still calls itself G4S in Sana’a, and extorts workers by giving them very small amounts of money in exchange for signing a waiver on all the workers’ rights and entitlements.

The days are passing with difficulty, the workers retain patience and determination, but we need to intensify efforts to resolve the issue as soon as possible, before the collapse of the steadfastness of the workers in favour of the exploiters. In short, the situation facing the workers is a very difficult humanitarian situation, and a constant struggle.

What are your views on the current war in Yemen?

Yemen is facing the most difficult circumstances, without mercy and with inhumanity by all parties to the conflict. We have had enough wars, and we reject in every way what is going on in our country, which has destroyed and exposed the Yemeni society to a catastrophic situation, the collapse of the economy and very difficult living conditions due to this forgotten war.

What role do you think the labour movement, in Yemen and internationally, could play to bring a solution to the catastrophe unfolding in your country?

The economic crisis in Yemen and the non-payment of workers’ salaries have serious repercussions in various fields, including the education sector, the health sector, and all the sectors that serve society. I believe that activating the role of labour movements is vital to help the workers and those sectors of society by all possible means, for the continuation of their activity and to avoid further disasters.

What role do you think organizations like the CWI can do to help your struggle, as well as the struggle of the Yemeni people for a better future?

They can contribute to the development of political and cultural awareness among workers and communities. Yemen’s workers, trade unions and community organizations in general suffer from deficits and weaknesses, particularly because of the war and crisis that Yemen is going through, and thereby they need support more than ever.

The CWI has played a large and effective role in supporting a working class and humanitarian cause such as the struggle of the TOTAL/G4S workers in Yemen, even though we did not expect much response from organizations in the first place. This is why the CWI has been the champion of the Yemeni workers in spite of all the difficulties.

I believe that the CWI and its affiliates all over the world have the ability to do much to activate the struggle throughout the world, including in Yemen, in the face of exploitation, racism and discrimination by multinationals. However, unfortunately more will be required to pressurize the companies, help deliver our voices and meet the workers’ demands.

In conclusion, I have great optimism that the Yemeni people, despite the current catastrophe, will rise from the rubble of the war, and overcome the current problems towards a better future.

Accept our sincere appreciation and respect.