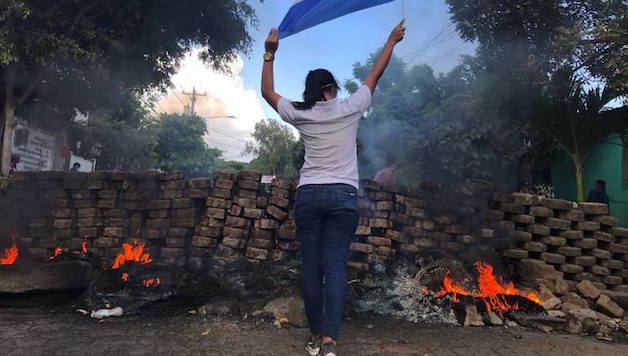 Since April, Nicaragua has become a bloodbath, with already 400 dead on top of thousands of injured, arrested and disappeared.

The trigger for this process was a legitimate mass movement against the attempt of the Daniel Ortega government, in agreement with the IMF, to implement a social security reform. The reform would have lowered the value of pensions and raised the value of contributions.

This mass movement was savagely repressed by the government, which used both the state apparatus and paramilitary organisations to do so, with methods reminiscent of the Somoza dictatorship.

The violence of the government radicalised the popular resistance, transforming it into a genuine rebellion against the government made up of students, peasants, indigenous people, workers and the urban poor. The movement had strong features of spontaneity and self-organisation, with no established centralised leadership.

A few days later, the government was forced to retreat in relation to the pension reform, but it was too late. This social explosion was the expression of years of accumulated discontent and social tension and opposition to the neoliberal, pro-capitalist policies of the Ortega government.

Degeneration of the FSLN (Sandinista Front of National Liberation)

The FSLN, led by Ortega who has ruled the country since 2007, has degenerated to the point of being transformed into another instrument in the service of big capital, and the interests of Ortega himself, his Vice President Rosario Murillo and the “new rich” of pseudo-Sandinista oligarchs.

There is virtually nothing left of the organisation which led the revolution that toppled Somoza in 1979 which inspired millions of workers and peasants all over Latin America. The tragic destiny of the Sandinista revolution has innumerable lessons for the Latin American and world Left.

Once Somoza had been brought down, the government led by Ortega and the FSLN stopped half-way on the road of completing the revolutionary tasks of the day. On the contrary to what had taken place in Cuba, they avoided expropriating the whole of big business and establishing a planned economy. Their illusions in a “mixed economy” opened the way for internal sabotage from US imperialism, including the formation of the reactionary “contras” armed force.

The imperialist offensive and the mistakes of Ortega and the Sandinistas, with the adoption of an increasingly “pragmatic” economic policy which was more and more distant from the ideas of the revolution, led to the defeat of the FSLN and the return of the right wing to power through elections in 1990.

Since then, Ortega and the FSLN turned more and more to the right in policies and in practice. They built alliances with sectors of the old oligarchy and right wing, like the corrupt ex-President Arnoldo Alemán. Ortega also sought ties with the reactionary Catholic church establishment, reconciling himself with old enemy of the Sandinistas, Cardinal Miguel Obando y Bravo and supporting legislation to totally ban abortion in the country.

After the defeat in 1990, Ortega also lost elections in 1996 and 2001. When he won elections in 2006, Ortega and the leadership of the FSLN had already consolidated their turn to the right and alliances with the old Nicaraguan oligarchy.

The economic model pushed by Ortega was based on neo-liberal policies like privatisations and the opening of the agribusiness, mining and fishing sectors to foreign capital, etc. This deepened the subservient, dependent character of Nicaraguan capitalism in relation to imperialism, while at the same time guaranteeing profits and wealth to the local oligarchy and new rich elite linked to Sandinismo.

An example of these policies was the project of the building of the Inter-Oceanic canal, linking the Atlantic and Pacific, which was awarded to a Chinese consortium. If it is concluded, this project will be a monumental ecological disaster and a severe attack on the affected regions. Among other consequences, it will cause the contamination of the lake of Nicaragua and the displacement of 25,000 people.

Since 2014, this project has seen peasant and indigenous protests against it to defend the environment, shaking up the political and social situation. The building of the canal began in 2015, but it had to be suspended due to the bankruptcy of the Chinese company which was responsible.

As in other Latin American countries, economic growth based on a primary-exportation model did not eliminate social inequality and poverty, but only built up more contradictions and political volatility.

Nicaragua remains the second poorest country in Latin America, with half the population living in poverty, rising to 68% among the rural community.

In this situation, the popular resistance to Ortega’s pension counter-reform, his neoliberal policies and the authoritarian nature of his repressive government is totally legitimate and deserves the support of the consequent Left, throughout Latin America and the world.

Despite still using some left or anti-imperialist rhetoric to manipulate the memory of the historic 1979 revolution, Ortega’s government plays the game of the right wing and imperialism. Countless former leaders of authentic Sandinismo have clearly denounced Ortega.

However, there are some sectors that stand on the Left who echo the distortions of Ortega. Recently, the Secretary of International Relations of the Brazilian PT, Monica Valente, compared the conflict in Nicaragua with the demonstrations in June 2013 in Brazil, saying that they were a question of actions by “small student groups, especially from private colleges, financed by the USA”.

This statement only makes clear that the leadership of the PT has understood nothing about the June protests of 2013 in Brazil, and less still about the events today in Nicaragua. June 2013 was not a right-wing movement, but a popular explosion with great transformative potential which was not seized upon because of the betrayal of the traditional Brazilian left and the weakness of the new Left in process of construction.

In the case of Nicaragua there can be no question of siding with Ortega in the face of this massacre. He must be fought, and a Left, working class alternative must be built.

It is obvious that, given the grave nature of the situation, sectors of the right wing and of imperialism who previously gained a lot from the Ortega government and its ability to contain social struggle, now see that the government is no longer able to serve their interests. They try to throw him overboard and manage the situation in a way favourable to them.

This is a natural element in these developments. It certainly does not mean that the Left should defend Ortega because of the reactionary intentions of sections of the right and imperialism.

The role of the Left is to encourage the independent organisation and struggle of the workers and poor for their rights and interests. The movement must reject any alliance with the bosses, right wing, imperialism or the Church. The working class, students, peasants, indigenous people and women can only rely on their own independent and organised power. The struggle should be democratically organised from below with committees of struggle made up of representatives elected democratically and coordinated on a national level.

Only on this basis can a real alternative to Ortega, the traditional right and imperialism be built. Without this, with or without Ortega, there will be defeats.

ABOUT US
Socialist Alternative is a national organization fighting in our workplaces, communities, and campuses against the exploitation and injustices people face every day. We are community activists fighting against budget cuts in public services; we are activists campaigning for a $15 an hour minimum wage and fighting, democratic unions; we are people of all colors speaking out against racism and attacks on immigrants, students organizing against tuition hikes and war, women and men fighting sexism and homophobia.
Contact us: info@socialistalternative.org
FOLLOW US
© Socialist Alternative 2019 | All rights reserved
44 Shares
Tweet
Share44