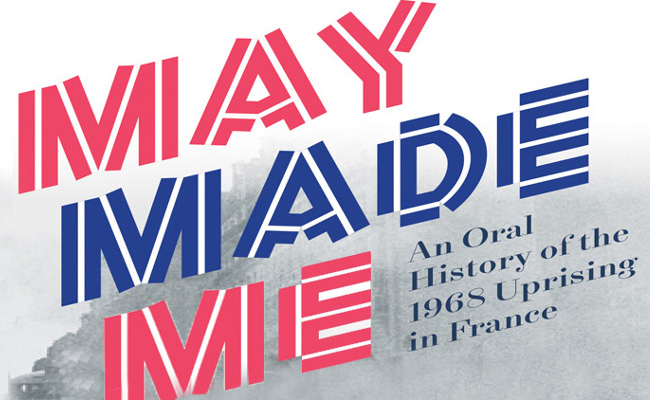 May Made Me: An Oral History of the 1968 Uprising in France
By Mitchell Abidor
AK Press, $15

Fifty years have not dulled the excitement of the general strike in France in May 1968 which shook the entire world. Media outlets such as the London Evening Standard declared “It is a revolutionary situation of an almost text-book kind.” Students and workers shut down France for weeks and created their own distribution systems for food, gas, and other necessities. The events of May permanently changed French society – much of French politics and culture still reference, positively or negatively the “‘68ers.” Today these events are rich with lessons for today.

For people who already have a grasp of the events and the general political landscape of May ‘68, May Made Me is a fantastic collection of interviews of people who partook in the events, conducted many years after the fact. Mitchell Abidor presents an interesting variety of opinions and memories: students in the March 22 movement, important figures such as the Trotskyist Alain Krivine, leaders of the Communist-Party-led CGT (trade union), peasant leaders, a few anarchists, and even a few filmmakers who were active at the time.

The interviews give a fantastic window into the spirit and feeling of the month. The people interviewed range from those who were politically active before May 1968, those who became active during the events, and those who were inspired by the events to join groups afterwards. For a sense of the varied nature of consciousness in a movement, this book gives an honest and open picture of this, often returning to the same questions about the mood in society to get different points of view on the subject.

By giving a good balance of people from different regions, as well as in Paris – where the events really drove the whole situation on a national level – the reader gets the sense of the rhythm of struggles. First breaking out in Paris and its suburbs, the movement spread within a matter of days throughout the rest of France, first appearing in major cities and then reaching out into all towns and even rural communities.

Of particular note is the excellent portrayal of how May ‘68 jump started the women’s movement in France. From the conservatism of the post-WWII period under de Gaulle, women took the energy of May and refused to obey the dictates and within a month, miniskirts became fashionable where they had once been taboo. Women, while not remembered as the central leaders of May ‘68, refused to take a back seat, speaking up and leading more and more as the month progressed. Almost every interview touches on this subject and it is inspiring, although at times it feels as if the interviews could have gone further into what the movement would become later.

While Abidor does a good job of drawing out the excitement and enthusiasm of some of his subjects, there are some interviews which fall a bit flat. In particular, the interviews with people still involved in politics – Krivine as well as the Communist Party members – reflect the lack of enthusiasm these people and their politics have for the events of 1968. Other subjects come alive on the page, remembering one of the most important months of their lives – including people who played pivotal roles in occupying the Odeon theatre, in setting up community groups, and who were active in their high schools.

Abidor reveals his syndicalist leanings as he repeatedly asks questions about industrial sabotage, even though not a single subject says was part of the conversation in 1968. By these accounts, the workers, while seriously rethinking how society runs, felt that their tools and factories needed to be protected, not destroyed. This showed a strong class instinct that these means of production could be harnessed under workers control for the needs of society rather than the dictates of profit. The factory occupations meant no scabbing was possible as the workers controlled the area and locked the gates, often keeping managers and owners locked inside.

A Useful Addition to the Record

This book is not an introduction to the events in France in May 1968 and should not be the first thing people read on the subject. It is a fantastic addition to the historical record and a look back on a month that shook French society.

On balance, the interviews are critical of the PCF, and the interview with three PCF leaders is quite illuminating. However, the book does not draw out the full extent of the betrayal of the working class perpetrated by the PCF. This is partially because the book, and the interviews, see the events of May 1968 not as a revolutionary moment, but as something else – though exactly what is left vague. Krivine, the self-styled Trotskyist says “it was a revolt not a revolution” not exactly the most specific of descriptions. Others struggle for words to describe it but are insistent it was not a revolutionary situation.

With 10 million people on strike, the government in exile, the economy shut down while the distribution of necessities was organized by committees of working people, and the general questioning of the system by workers, students, and youth – the CWI sees this as a revolutionary movement which had the ability to take power had the right lead been given. Therein lies the destructive role of the PCF – by claiming, at the time and since, that it was not a revolutionary situation, but just about economic demands, the mass organization of French workers led the working class away from a revolutionary path toward negotiation with the capitalists who had nearly given up the ghost.

The interviews presented in May Made Me are valuable to anyone taking a deeper look into the events of May 1968. It is an engaging and entertaining read and gives an excellent sense of the excitement of the movement which is rarely captured in translation.