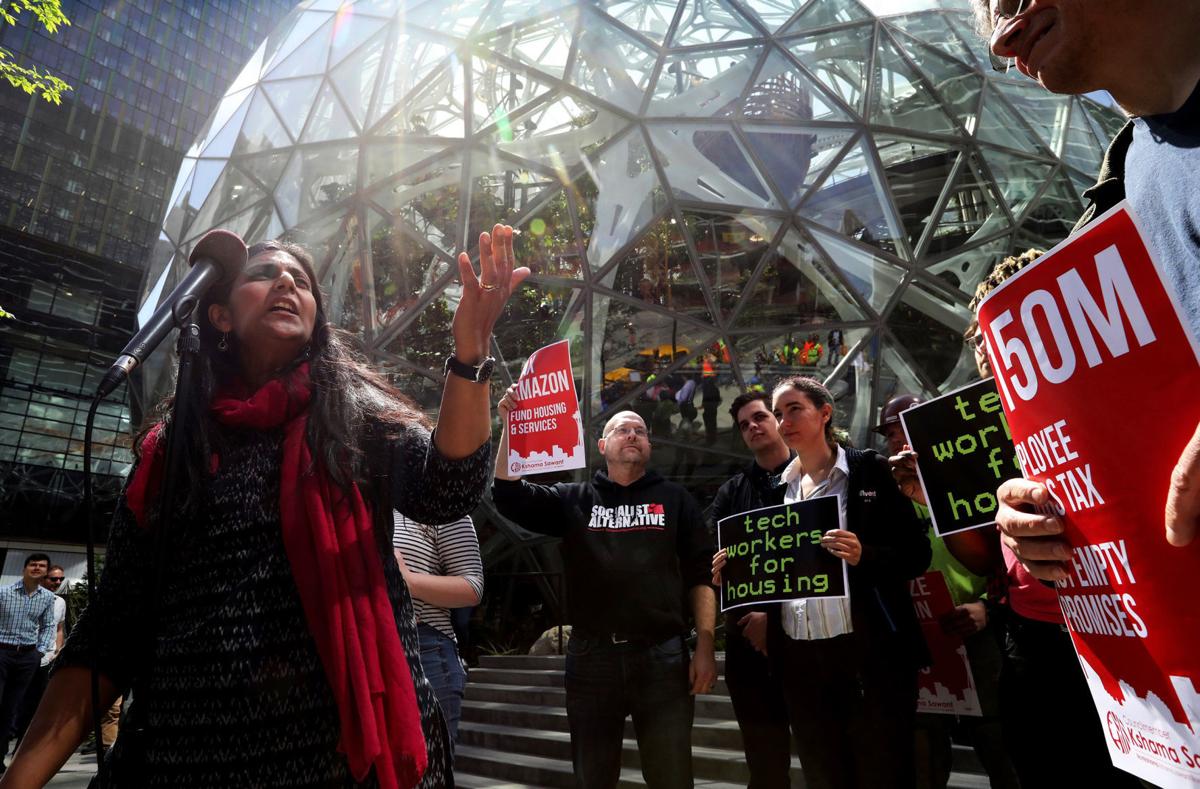 In the next two weeks, the City of Seattle could see one of the biggest transfers of wealth from the pockets of big business to working people since the $15 an hour minimum wage victory! Kshama Sawant, Socialist Alternative member and Seattle City Councilmember, alongside housing activists from across the city, has been calling for a $150 million tax on the largest 3% of businesses to fund affordable housing. After mounting a powerful grassroots campaign, this movement has forced the hand of the Seattle City Council to propose a $75 million tax, a critical first step in the movement! This tax should be a jumping off point for the movement as even $150 million is just the beginning of what’s needed. We need a massive expansion of publicly-owned, hiqh-quality social housing to address the severe housing and homelessness crisis – paid for by taxing big business.

Jeff Bezos makes more in one minute than an Amazon warehouse worker makes in a year!  Amazon’s immense growth and exploitative labor practices have gained growing national attention and Socialist Alternative has been at the forefront of reporting on this from a working class perspective, with strategies to fight back against corporate giants like Amazon and win.

In the coming weeks, the Seattle City Council will likely take a final vote on this tax. Between now and then, big business is determined to do whatever it can to water down the legislation and fill it with corporate loopholes. Last week, Amazon sent an extortionary threat to the city. Amazon promised to halt construction in Seattle if this tax is passed, holding over 7,000 construction jobs hostage! It is threats like this that represent that brutal race to the bottom inherent in the system of capitalism. Big corporations like Amazon are looking to cut costs at every turn, and workers always bear the brunt of these attacks. This is standard for a system that places profit and the wealth of a few over the needs of the vast majority of society. Jeff Bezos’ wealth sits on top of the shoulders of tens of thousands of Amazon employees, and it’s those employees who make the company run. We need a fundamentally different society — a socialist society — where Amazon’s infrastructure, alongside that of the top 500 corporations, is taken into public ownership and run democratically by the workers. The battle for a tax on Amazon to fund affordable housing is a critical first step, but our movement cannot stop there.

Understandably, the brothers and sisters in the building trades are afraid that this will mean lost jobs expanding Amazon’s Seattle campus. However, the reality is that this tax is pocket change to Amazon and this threat is intended to turn workers against one another by pitting housing against jobs. Amazon already made enough in the first quarter of 2018 to pay its share of the $75 million (around $20 million) for 80 years! Amazon’s bullying approach to this tax battle has gotten national attention, with Bernie Sanders tweeting: “Amazon is using its enormous power to dissuade the city of Seattle from passing a modest tax on profitable corporations to address their severe housing crisis. This is what corporate power and oligarchy is all about.”

Some of the City Councilmembers (Democrats) who are supporting this legislation do so only with great hesitancy, because of the fierce opposition to it by their big business backers. Four of the nine Councilmembers are staunchly opposed to it. As recently as last fall, a majority of the City Council voted against a similar but even lower tax, and it’s only the pressure of the movement that has led to this current legislation. Amazon threw down $350,000 for Democratic Seattle Mayor Jenny Durkan in her election campaign last year. It is no surprise that Durkan is currently considering a veto of the legislation. The main factor in winning this big business tax, and in defeating the corporate loopholes being introduced, will be the strength of our movement, the ability to mobilize broader public support and to defeat the arguments of big business.

Kshama Sawant has been fighting for a tax of $150 million, and the $75 million being offered by the City Council is just the first step of this movement. In the next two weeks, working class people in Seattle and across the country need to make absolutely clear that corporations like Amazon – who paid $0 in federal taxes in 2017, who subject warehouse workers to grueling and brutal conditions, and who have contributed to the housing insecurity of huge sections of Seattle’s population – need to pay their full share.