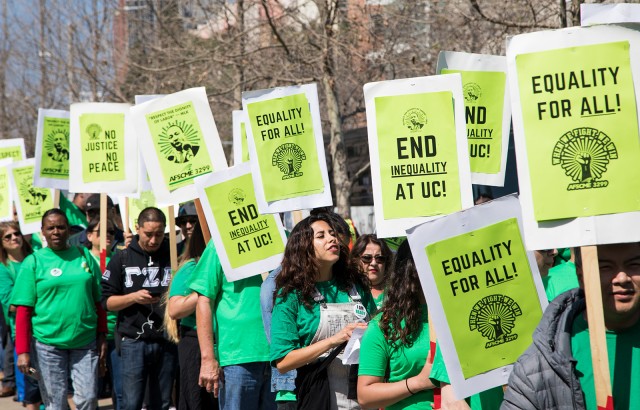 Unions representing 53,000 workers are set to strike the University of California (UC) May 7-9 in the biggest strike the statewide university system has ever faced. After months of negotiations, management continues to demand unacceptably low wage increases that will be almost certainly swallowed up by increased health care costs, as well as attacks on retirement.

The UC system includes six major health care centers across California and is the fourth largest health care delivery system in the state. The 24,000 member American Federation of State, County and Municipal Employees (AFSCME) was the first union to call a strike vote, with members voting 97% in favor of authorizing a three-day strike. California Nurses Association (CNA) followed with a 98% vote in favor of a two-day sympathy strike with AFSCME, and the University Professional and Technical Employees (UPTE) will also strike in solidarity for one day.

At a time when the housing crisis is ravaging working class people across California, UC is offering minimal wage increases that won’t keep up with the cost of living. Management wants to jack up employee health premiums, putting the burden on workers. In each contract negotiation over the last several years, management has been using different strategies to undermine the employee pension plan. This time, they want to offer new-hires the option to opt out of the pension plan and choose a 401k style plan. UC employees can already invest in a 401k type plan in addition to the pension, but the defined-benefit pension is a much better deal for workers – if we can defend it. Allowing new workers to opt out is an attempt to weaken the retirement plan for all workers.

Given the rollbacks on wage increases and benefits, you might imagine that UC is facing a severe financial crisis. In fact, there is no such crisis, and management has refused to open its books during bargaining. A 2017 audit of the UC system found an undisclosed reserve of $175 million, while the UC regents were voting to raise student fees. AFSCME’s recently released study revealed a 64% increase in top administrator salaries over 2005-2015. UC may be a public university system, but within it, income inequality is widening, just as it is in society as a whole. An executive in the top 1% of UC employees now makes nine times the salary of an employee paid the median salary; the difference was seven fold in 2005. When celebrity right-wing extremist Milo Yiannopoulos came to UC Berkeley, the university spent $4 million protecting him. Clearly administration can find the money when they need to.

The current attacks on employee wages and benefits are part of an approach to cutting costs that would be worthy of any private, for-profit corporation. The AFSCME study has found that over 7,000 contract workers are doing jobs that UC employees are trained to do. Contract workers are making as much as $8.50 per hour less than UC employees doing the same work, and many of them get no benefits. There are now 37% fewer black workers at UC than there were in 1996. Surveys at two large campuses showed that black workers were more likely to be working in the casualized contractor workforce than as direct UC employees. Workers are tired of doing two people’s jobs, of long commutes to towns where they can afford the rent, and of wage increases falling behind the cost of living. May 17 will open the floodgates of repressed anger.

Why Is the University Taking a Hard Line?

When AFSCME organized pickets to promote their cause at a February rally in Berkeley, black union member and dining worker, David Cole, was grabbed by UC Police and thrown to the ground. After two weeks of campaigning, all charges against Cole were dismissed. However, this incident was symbolic of UC management’s hardline towards AFSCME and university unions.

In early 2017, about 90 information technology workers at UC San Francisco were laid off, and their jobs outsourced to a private company whose workforce is primarily overseas. Those laid off were required to train their replacements in a process management referred to as “knowledge transfer.” Offshoring jobs and widespread use of contractors are union-busting techniques. UC management’s playbook is right out of “Capitalism 101”: cut costs through increased exploitation of workers, charge consumers (students) more, all while executive salaries balloon.

UC President Janet Napolitano and the UC Regents would ideally like a union-free environment. A world where all jobs, except a few, are subcontracted out, wages are lowered, and employees do not question who rules the workplace. They want striking workers to compare their wages to the wages of the contract workers. With the U.S. Supreme Court currently considering the Janus case, which would significantly weaken public sector unions, UC could be delaying contracts until after the court’s decision. If the court rules in favor of Mark Janus, unions will no longer be able to collect dues from non-union workers who benefit from union contracts, and the public sector nationally will effectively become “right-to-work.”

UC workers have shown that we’re ready to fight back. A bold strike, even a brief one, can put pressure on management and build confidence among workers. The striking teachers from West Virginia, Oklahoma, Colorado, and Arizona are an inspiration to UC workers. In Republican-dominated states many teachers and public sector workers haven’t seen wage increases for ten years while state taxes have been slashed for the wealthy and corporations. In California, the regents who govern the UC system are overwhelmingly Democrats and/or Democratic appointees, and include a host of CEOs of major corporations. The UC regents, representing the Democratic party establishment in California, have overseen the corporatization of the state university system through cost-cutting on labor, tuition fee hikes, and an array of corporate partnerships.

Huge Potential for the Strike

This strike, which seems inevitable, will see three major unions joining forces: from gardeners to nurses to researchers. Unions should appeal to non-union contract employees to join the strike by campaigning for contract jobs to be insourced, or hired on directly by UC, as has been done before. AFSCME must be clear: workers and students need to unite and oppose the use of tuition hikes to pay for the gains union workers are looking to make. Ultimately, we need a massive tax on the rich to pay for free college education, fully funded services for students, and well-paid jobs and benefits for the workers that serve the university.

The union movement as a whole needs to go on the offensive against Janus with meetings organized in every local, leading to a national day of action and a mass rally in Washington. The teachers’ strike wave has put organized labor back on the forefront of struggle. By fighting for a decent contract, workers in AFSCME, UPTE, and CNA are highlighting the need for strong unions to protect public sector jobs.