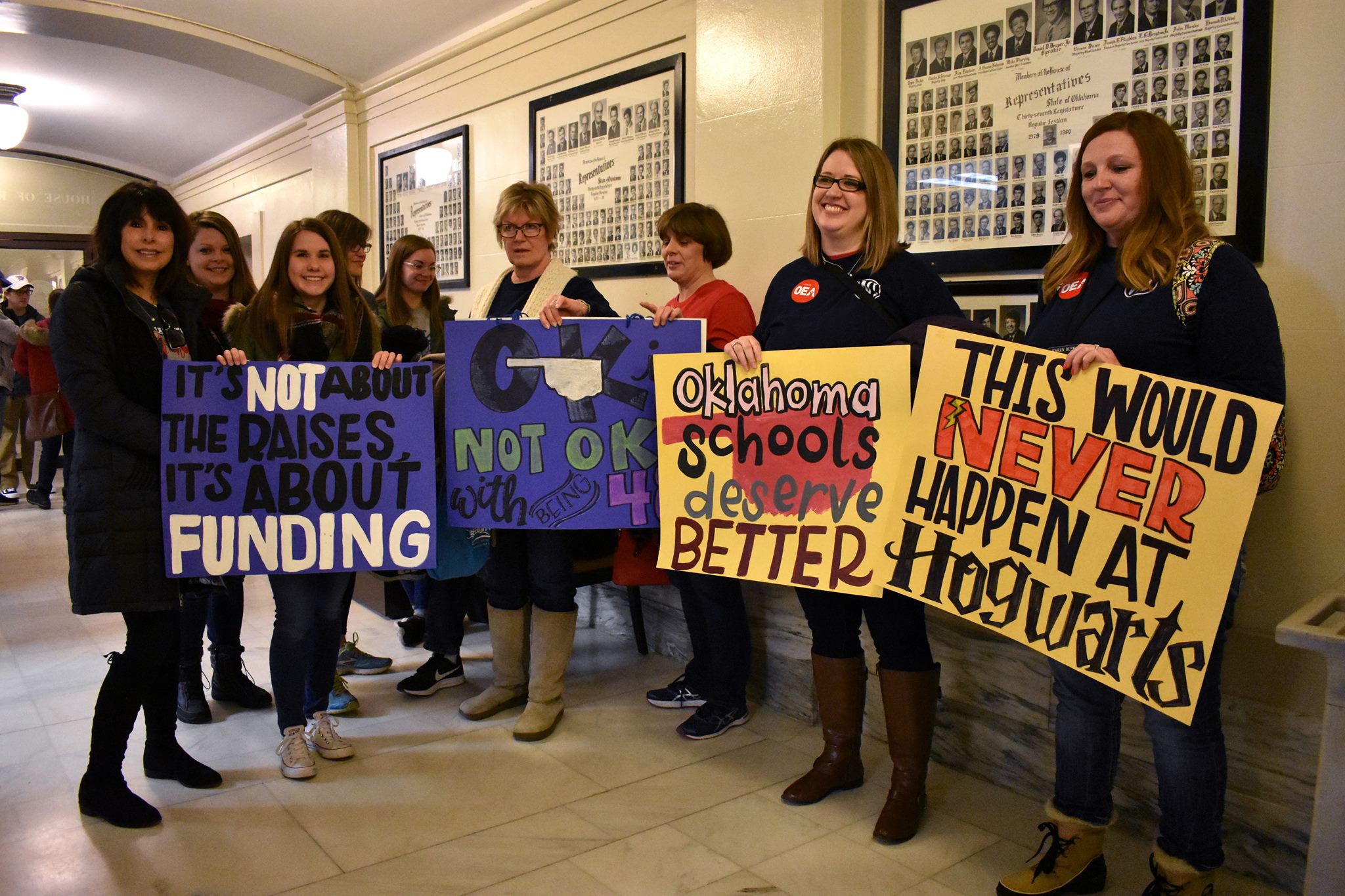 Three Socialist Alternative members from Arkansas drove to Tulsa to take part in demonstrations. The following report is based on conversations they had with Oklahoma teachers.

Oklahoma teachers are continuing the wave of strikes that started in West Virginia in response to stagnant salaries and a decade of cuts to education spending. On April 2, thousands of educators began to converge on Oklahoma City’s Capitol building for daily protests. Teachers in 200 of Oklahoma’s 500 school districts have joined the strike and articulated their discontent with slogans such as “education funding should not be historic,” “straight outta funding,” “I’d rather be teaching,” and “tax the oil industry.” Later in the week, when Republican Governor Mary Fallin said that teachers were like a “teenage kid that wants a better car,” teachers responded by chanting “where’s my car?” Students joined their teachers by participating in a mock classroom at the capitol where student speakers expressed their dissatisfaction with schools that do not adequately prepare them for the future.

Given the condition of the education system, it is not surprising that teachers felt compelled to take matters into their own hands. Education Week’s assessment of state education systems ranked Oklahoma 46th in the nation with a score of 68.4 out of 100 points. inflation-adjusted general funding per student dropped by an incredible 28.2 percent between 2008 and 2018, the biggest reduction of any state, according to the nonpartisan Center on Budget and Policy Priorities. Many teachers on strike have complained about the lack of supplies and books as well unmanageable class sizes; moreover, a number of school districts have adopted 4-day weeks to cut costs. The state has been plagued by shrinking budgets for years. Even before the Republicans took control over the state legislature in 2009, the Democrats helped enact income tax cuts. In 2006, Democratic Governor Brad Henry signed a $627 million a year tax cut.

Furthermore, the average Oklahoma teacher salary is only $42,460, the lowest in the country according to the Bureau of Labor Statistics. As a result, many teachers have had to work additional jobs to make ends meet. Moreover, the low pay has resulted in a teacher shortage where the state had to issue over 1,800 emergency teaching certifications. Just prior to the April 2 walkout and under pressure from the growing teachers movement, the Republican dominated state legislature was forced to pass a bill that called for a mere $6,100 raise in teacher pay (after ten years without a raise!) and $20 million for education spending, by taxing the local oil and gas industry. Even though this bill is the first major tax increase in 25 years, it is far short of what is needed to improve Oklahoma schools.

On Friday, the legislature passed another bill to raise an additional $44 million in revenue by taxing online sales and gambling. Learning from the experience of the West Virginia teachers, the Oklahoma teachers have refused to back down. They plan to continue the strike into a second week, calling on the legislature to end tax exemptions on capital gains and to reintroduce a hotel tax that was passed last month before being halted. These measures would bring in a combined $150 million for schools.

Teachers Learn to Fight Back

Frustrated with the broken educational system, radical teachers began organizing a year ago through the Oklahoma Teachers United (OTU) Facebook group. Co-founders Larry Cagle and Mickey Miller kept teachers active. They stood up to the conservative leadership of the Oklahoma Education Association (OEA), as well as the leadership of the smaller local affiliate of the American Federation of Teachers. The local AFT leadership was willing to accept the initial bill from the state legislature, reflecting their cautious and compromising approach. AFT teachers affiliated with OTU threatened to withdraw membership from the union.

Instead, the teachers took inspiration from the West Virginia teachers who refused to go back until their key demand was met despite being urged to do so by union leaders and Democratic politicians. Like the West Virginia teachers, they invited other state employees to join the strike.  Among those at the Capitol building was an Oklahoma turnpike employee who has not received a raise in 11 ½ years. At the April 2 rally, Larry Cagle of OTU argued that teachers should use personal days or sick days to keep schools closed during this week of standardized testing. Furthermore, he stressed the importance of keeping students and parents engaged in the strike effort. Again following West Virginia’s example, striking teachers have provided meals for their students.

A key question facing the teachers is how to collectively decide the future direction of their struggle. Compared to West VIrginia, the Oklahoma teachers are starting from a position of being less well organized but they have stepped up to the challenge magnificently. OTU, OEA, and AFT should jointly organize mass meetings of teachers in all the areas to discuss and make collective democratic decisions regarding strategy and whether or not to accept further bills passed by the legislature as a sufficient basis to return to work.

Among the teachers’ demands are a $10,000 pay raise for all teachers and $5,000 pay raise for all school support staff, a $200 million increase in funding for education, and $255.9 million in additional healthcare funding, including for mental health support for students. The victory and experience of the West Virginia teachers struggle shows that when workers move into struggle and are prepared to engage in an escalation of tactics, such as strike action, they can win important gains. A one-day public sector general strike in Oklahoma, could be a vital step in winning the demands of the teachers which are in the interests of the whole working class.

Additionally, teachers and other state employees should continue to insist that the oil industry and big business in general, should be taxed to fully fund education, increase teachers, support staff, and public sector workers pay, healthcare, and pensions, and to lower classroom sizes.

The national teacher unions, other public sector unions, as well as Bernie Sanders, and other key progressive figures  should call a national day of action with marches in Washington D.C. and around the country to demand fully funding education through taxing the corporations and the billionaire class.  This day of action should also be the start of mass resistance to the threat of the Janus case in front of the Supreme Court which would create “right to work” conditions in the entire public sector nationally.

Socialist Alternative fully supports the educators’ efforts to challenge the conservative establishment in Oklahoma and our members have gone to the strikes and rallies at the state capitols in West Virginia, Kentucky, and Oklahoma to show our solidarity. In Oklahoma as in West Virginia, local organizations of the Democratic Socialists of America have also been very visible and playing an important role.

The movement is continuing to spread. Just a few days prior to the Oklahoma strike, Arizona teachers, organized through #RedForEd,  held a rally at the Capitol building in Phoenix to voice similar demands for pay raises and education funding.

After twenty years of corporate education reform, savage austerity and endless vilification in the mainstream media, teachers are rising up and fighting back for themselves and for their students. These strikes and walkouts are also showing the road to rebuilding a fighting  labor movement in the US that can resist the incessant attacks on workers rights and fight for what working people and youth need. They also show that we don’t need to “wait until November” to fight the reactionary Republican agenda. The time to fight is now!

Unfortunately under capitalism, the relentless drive for profits reigns supreme. Education should be about more than preparing for future employment; it should help children learn about themselves and the world around them.  Today, education is constantly under threat of privatization, defunding, and being undermined to serve the needs of business rather than the full development of well-rounded human beings. Under socialism, education would be fully funded and democratically controlled by the community, educators, students, and parents.