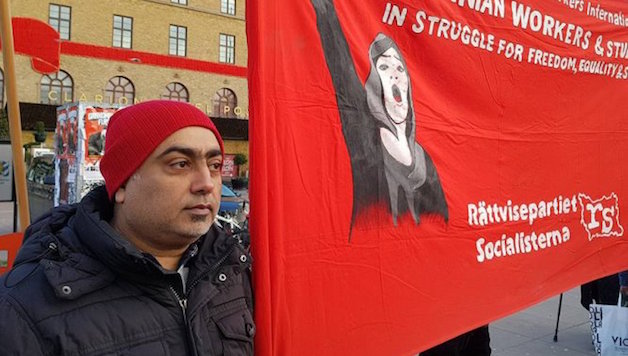 CWI member, Zahid Baloch, is now in a refugee prison in Trandum, Norway. We visited him on 14 March. It was only yesterday that we received information about Zahid’s whereabouts, after a week without any contact. The Swedish Migration Board and the border police deported him to Norway in violation of laws and regulations. His legal representative was not informed.

The deportation was carried out despite Zahid’s doctor raising serious warnings about his health. Zahid’s phone was confiscated and he was taken away in handcuffs at seven o’clock in the morning. He is locked in a cell in Trandum, which he is only allowed to leave for a mere 15 minutes a day.
Zahid has only a week to appeal against the three-year-old decision to deport him to Pakistan.

More protests are needed against the risk he will be sent to Pakistan, from where he fled from torture and death.

Stop the expulsion of Zahid Baloch

Zahid Baloch requires asylum. He is one of the world’s most well-known critics of the regime in Baluchistan, where the Pakistani military kills with impunity and brutally oppresses all opposition. Zahid Baloch’s case and reports of the oppressive conditions in Baluchistan were reported several times to the UN Human Rights Council in Geneva (OHCHR).

Zahid Baloch described the situation in Baluchistan with gave speeches at many demonstrations and meetings, as well as in newspaper articles and on the internet.

Zahid Baloch’s life has been threatened. His father was beaten so badly that he almost died, because of Zahid’s activities.

Zahid Baloch is an active socialist and defender of women’s rights, which has led to his receiving threats from right-wing extremists in Pakistan.

In addition, Zahid, has had two heart attacks. He also needs regular care for post-traumatic stress following imprisonment and torture.