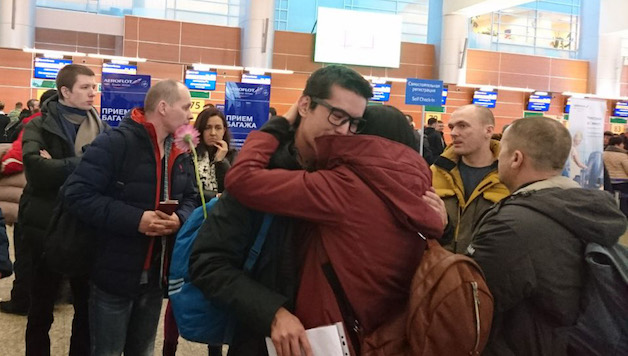 On February 15, at ten minutes past eleven, an aircraft left Moscow for Germany. On board was Ali Feruz, his partner, his lawyer and a representative of the Red Cross, which has arranged the necessary documents for him to enter and live in exile in Germany. This is, without doubt, a victory for the Hands-off Ali campaign and all who supported him.

The campaign to free the journalist Ali Feruz, who works for the opposition paper Novaya gazeta, lasted almost a year. He was first arrested in March 2017, accused of breaking immigration laws. This followed the refusal by the Russian authorities to grant him asylum after he fled Uzbekistan, where he had been arrested and tortured due to his opposition to the brutal Karimov regime. For the last six months, after a Moscow court decided to deport him back to Uzbekistan, Ali was held in a special prison for foreign citizens.

Until his arrest in August, Ali wrote to expose the exploitation of immigrants in Russia and about the crimes of the Uzbek regime.  He volunteered for human rights organisations, was an LGBT activist and a member of the Independent Trade Union of Media Workers.

When the threat of deportation back to Uzbekistan was made by Russia’s courts, where Ali faced the threat of further imprisonment, a huge campaign was mobilised – rights activists, trade unionists, LGBT activists, all joined in. And Socialist Alternative (CWI Russia) was one of the main driving forces behind the public campaign in defence of Ali.

During the year, many public activities were organized. We picketed the President’s administration, the police’s immigration department and the courts. We took part in marches and protests, displaying placards in support of Ali. There were acts of solidarity in many other countries. The on-line petition on the change.org platform collected over 70,000 signatures. There were fund-raising evenings, collections to support Ali, his family and other immigrants who have found themselves held in the Sakharovo prison. We distributed leaflets, recorded videos, issued press releases and held many meetings. In other words, we did everything possible to attract attention to Ali’s case and to involve anyone who is prepared to be active in any way. In addition, of course, the lawyers and rights activists have also done a huge amount of work.

In essence, we have been fighting to force the Russian state to observe its own laws. The authorities should have granted Ali the right to political asylum and not try to hand him over to the Uzbekistan political police. When it became clear that obtaining political asylum was not going to happen, the demand to allow Ali to leave Russia for a third country became key.

Campaign of lies against Ali

No doubt those people who, over the course of the year, spread lies about Ali in the mass media and the social networks will now claim that all he ever wanted was “to get out to the West”. Others will think that by letting Ali leave for the West is the best outcome for Ali. But we do not agree. Freedom for Ali is a victory but a happy end would have been to allow Ali to stay, live and work in Russia.

Ali is needed here. Not just because he is known and loved. His professional experience and personal qualities would be of use to the whole Russian mass media, social and political organisations who are fighting for the rights and freedoms of all the oppressed. Ali would have rather stayed, until it became clear that neither Russia nor Uzbekistan would ensure his freedom and allow him to speak his mind. The authorities in these countries only see such people as a threat and are prepared to get rid of them. They are prepared to hand over activists like Ali to neighboring authoritarian regimes or put them away in prison where they can be tortured or even killed.

We have much more work to do and things to fight for. The campaign in Ali’s defence has attracted attention to the arbitrary treatment of immigrants and refugees, and to the inhumane treatment of foreigners in the so-called detention centres, which are no better than real jails.

The campaign, of course, revealed a few weaknesses. It was hard to keep the campaign “in shape” the whole time. Sometimes mobilization took place automatically, and, at other times, it was hard to get people activated. But we always insisted that the most important thing for such a political campaign was public activity, although not everyone always saw this as necessary.

But now we have reason to celebrate. This is our success, our achievement. Even in these difficult political conditions, solidarity campaigns can succeed. By defending Ali, we defended ourselves.