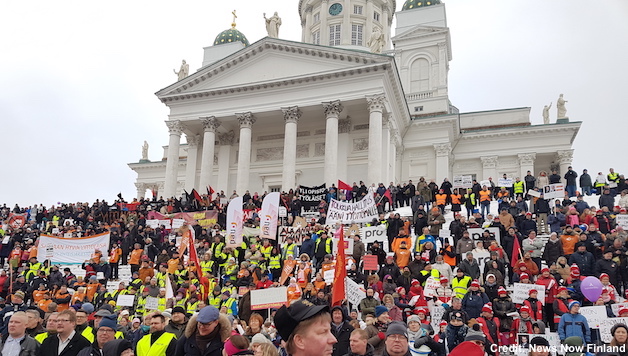 Helsinki was at a standstill on Friday, 2 February, as a strike by the transport union, AKT, quickly escalated into national action against the so-called “Active Model” of unemployment. Under the active model, unemployed people are required to prove they have worked in casual, often underpaid jobs or taken hard-to-access training courses in order to continue to receive social security benefits.

A march from AZT’s headquarters in Kali fed into a mass demonstration where 15,000 people filled Senate Square, despite the closure of almost all public transport in Helsinki and a “snow inferno” which had deposited 20cm of precipitation the day before. Across the country, not only transport workers but construction and manufacturing unions were on strike, with a tenth of Finland’s workers – 200,000 – downing tools.

Sosialistinen Vaihtoehto (CWI Finland) saw the mood for a political strike in Finland was increasing months ago, with loud demands for one resonating with participants in September’s Kommunizma demonstration against the right wing government. Friday’s strike takes place at a time when political tension has increased further: negotiations between national unions and employers on the 2018 pay agreement are grinding on with difficulty.

With today’s action, unions are re-discovering their voice, proclaiming the “Active Model” to be the violation of the Competitiveness Pact signed between unions and the government two years ago. Union members need to seize this moment and push, from the ground up, for their unions to escalate action: now is the time for a general strike against the Active Model, against austerity, and against all the government’s attacks on workers, the poor and the oppressed.

Certainly the Active Model is the right target: hated by a majority of the population, it is explicitly being used to force unemployed workers to take low-paying, precarious jobs and then go through a maze of bureaucracy just to receive enough money for food. As unemployment rates in Finland have scarcely changed at 9% since 2011, while bread lines continue to grow, the government clearly does not have any more interest in getting people to work than its two predecessors did.

Instead, some analysts point to a parallel between the Active Model and similar efforts in Britain and other countries: the huge increase in bureaucracy will create an opportunity for the right-wing government to outsource social security administration to the private sector, undermining public sector workers while creating opportunities for big business to profit through handouts of public money. Any such agenda should be resisted to the utmost.

Who, then, can lead this resistance? Left Alliance leader, Li Anderson, received enthusiastic cheers from the crowd in utter contrast to her party’s second-from-last showing in the presidential election; recent polls say Anderson is hugely popular among left-wing voters and the general public. Anderson’s popularity however, like that of New Zealand’s Labor prime minister Jacaranda Arden, is largely based on public image rather than a record of action.

The re-election of Sauli Niinistö as president at the end of last month was a sign of the weakness of the the Social Democratic party and the Left alliance.

If the Left Alliance, which has ties to the most active unions in Finland, can seize last Friday’s mood and mobilize workers, students and the unemployed into a mass movement against austerity, they will certainly send a shock wave across Finnish politics that will sweep aside both the government and the soft layers of the opposition and open up space for even more radical voices. If the Left Alliance refuses to present a clear socialist programme, however, one with full funding for unemployment benefits, a programme of job creation and sliding scales of wages to ensure people’s jobs and pay do not depend on the casino games of the market, they condemn Finland’s workers to further austerity.