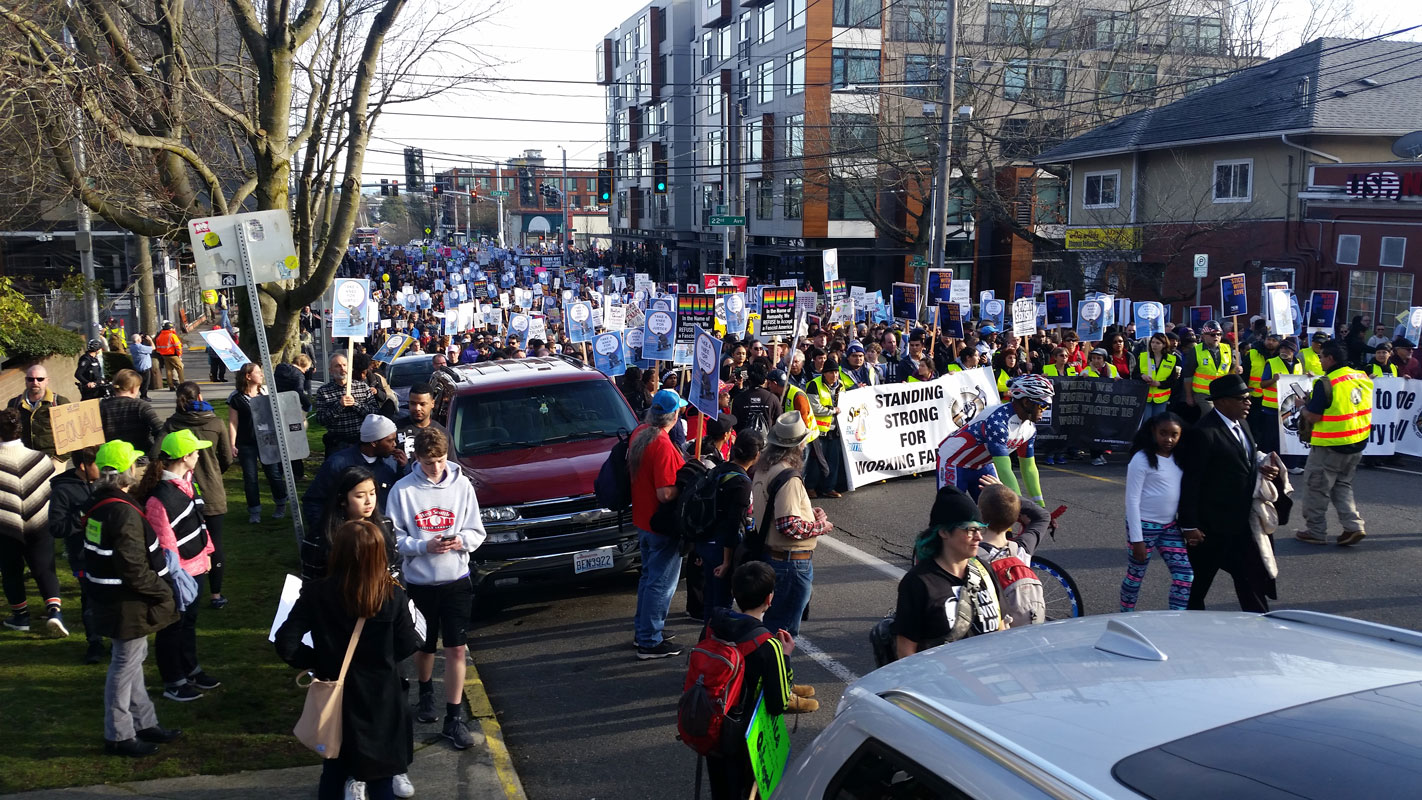 Ten thousand people came out in celebration of Dr. Martin Luther King Jr’s life on the day when, had he not been assassinated, he would have turned 89. Before the event began officially, hundreds of people had visited a career and opportunities fair in the cafeteria of Garfield High School, in the center of Seattle’s historically black Central District. The official event continued with 30 workshops, many of which were standing room only, ranging from the Power of Organized Labor to the Art of Resistance and the many faces of MLK’s legacy, especially the struggle against police brutality and the injustice system of today.

For the 36th year running, students, unions, and community organizations participated in a lively celebration that included music and spoken word performances. This year, the main slogan was “Take a Knee for Justice,” referencing Colin Kaepernick’s high profile NFL protests against police brutality. Some of the workshop presenters, however, in particular the student representatives of the new Coalition for Anti-Racist Students, were clear that the time for asking for liberation was over–they called for student representatives to the school board and more. The recognition of the need to make demands and fight for them is a positive step forward, especially in the youth.

After the workshops, in the crowd of people that could not squeeze into Garfield’s packed gymnasium for a rally, members of Socialist Alternative engaged with local residents about the need to curb the housing crisis, the demand for rent control getting a particularly strong echo, and the need to jail cops who commit extrajudicial killings. Socialist Alternative members discussed the links between racial oppression and the housing crisis. There has been a clear connection between the displacement of communities and the capitalist system of the developers who build for profit. To successfully fight this we will need to build fighting social movements with a goal of building an alternative socialist society.

To contrast, inside the rally the newly elected mayor, Jenny Durkin, and other Democratic Party politicians gave lip service to the legacy of Dr. King today while presiding over a city where 42% of black youth live in poverty After the crowd spilled back out into the street, the march began. Along the way chants rang out of “Black Lives Matter” and “Stop Displacement, Stop New Seasons” as the crowd passed an under-construction building slated to be a new location of a New Seasons supermarket, an anti-union, unaffordable high-end grocer – just one symbol of the displacement of communities like Seattle’s Central District. The crowd finally packed into Westlake Park downtown to hear a few more speakers before the dispersing to their workplaces, homes and some back to Garfield for a shared meal.

The MLK Day events serve to kick off 2018, a year that will see more struggles open up on many fronts. Socialism and feminism are on the rise, especially among young people. The #TakeAKnee and #MeToo movements will continue to seek political expression in the streets, in campaigns, and in people’s daily lives.