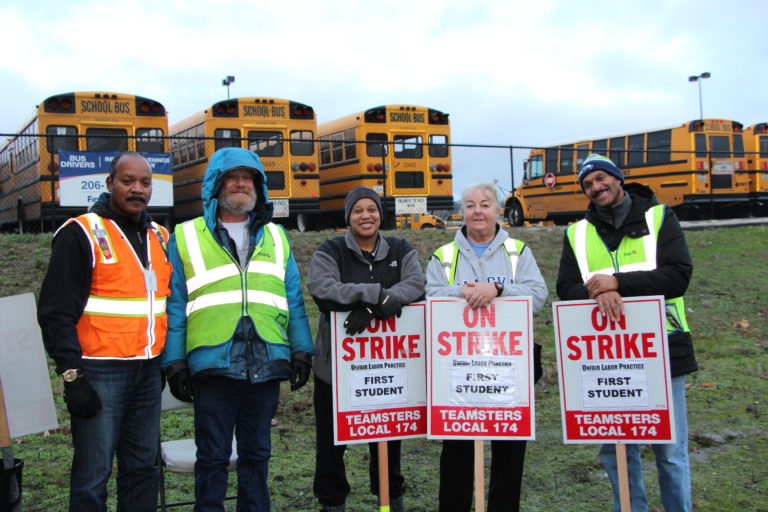 This solidarity statement was originally published by Social Equity Educators, a rank and file caucus of Seattle Education Association. The statement was authored by Matt Maley, a Seattle teacher, union activist, and member of Socialist Alternative.

After a one day strike of school bus drivers on November 29, Teamsters Local 174 returned to the negotiating table with First Student, part of a multinational corporation based out of the UK that pulled in $7.1 billion in 2016. However, on January 6, the Teamsters rejected their next flimsy offer by 85%. Representing 400 drivers in King County, the drivers are fighting for healthcare and retirement benefits. According to the union, “fewer than 7% of First Student drivers in Seattle are covered under the Company’s health care plan”. They are willing to go out on an indefinite strike if First Student does not come back with an improved offer. Knowing this, as recently as a week and a half ago, First Student posted part-time job ads for scab drivers.

This past week, educators represented by the Seattle Education Association, by a 93% vote, agreed to a solidarity walkout. Should the Teamsters engage in an ongoing strike, SEA members would walk out on a Wednesday during the early release time for professional development. This is after both the students and the school buses will have departed for the day so as not to impact student instructional time.

In 2015, the SEA was able to settle our strike in a timely manner in no small part because our Teamsters sisters and brothers stood in solidarity, not crossing the picket line to pick up waste or make deliveries which increased pressure on the district to settle.

In order to help the Teamsters win a strong contract and get back to work in a short time, if an ongoing strike happens, all students, parents, and community members who are able should join the SEA educators in solidarity on the picket lines before and after the school day at the South Park or Lake City First Student locations.

If First Student continues to put forward inadequate proposals, educators should be ready to take more militant steps to support the drivers who are so crucial to equitable access to our public schools. This may have to include more than just a solidarity walkout during professional development, but an ongoing strike of our own where we shut the school system down until First Student meets the Teamsters demands. For now, buildings should discuss how best we can support families in need of transportation to school. Community carpools and rideshares could be organized with help from Soup for Teachers and other groups that cropped up during the 2015 strike.

If the Teamsters strike, picket lines would go up at the following First Student locations: