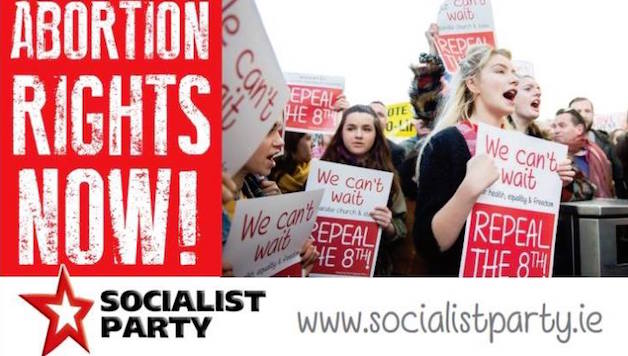 In mid-December, the abortion rights movement in Ireland scored a massive victory when a parliamentary committee recommended repealing the current ban on abortion in Ireland and allowing for unrestricted abortion up to the twelfth week of pregnancy.

The 8th amendment of Ireland’s constitution outlaws all abortion except if a panel of doctors concludes that the pregnant person’s life is endangered by the pregnancy. This forces people who need abortions to either continue their pregnancy, travel outside the country to one where abortion is legal or take abortion pills which, while safe, can land you in prison for 14 years. This law disproportionately impacts the working class, who often lack the funds to take time off from work and travel to receive an abortion, or must make significant financial sacrifices to do so.

The Socialist Party, the Irish sister party of Socialist Alternative, has been an integral part of the struggle for abortion rights and played a huge role in achieving this recent victory against one of the strictest abortion laws in the world. In 2013, members of the Socialist Party founded ROSA (for Reproductive rights, against Oppression, Sexism & Austerity) a socialist feminist organization. The group has contributed greatly to the growing public awareness that the draconian 8th Amendment does little to stop people in Ireland from obtaining abortions and that legalized, accessible abortion is a necessity.

The mainstream media’s coverage of the decision has mostly focused on how hours of expert testimony about the need for legalized abortion gradually shifted committee members’ opinions. In reality, this battle was won by an organized movement that compelled the anti-choice establishment to bend to popular will. Several members of the committee said that the widespread illegal use of abortion pills convinced them the current law is untenable. ROSA played a leading role in raising public awareness of the use of abortion pills. In 2014, they organized an “abortion pill train” that saw members of ROSA and other abortion rights activists traveling from Dublin to Belfast to pick up abortion pills and publically consuming them back in Dublin, in a powerful display of civil disobedience. In 2015 and 2017, a “bus for repeal” traveled to major cities around Ireland to distribute abortion pills and raise awareness; each action garnered international media attention.

ROSA is spreading to other countries, as Spain and Belgium have also founded their own chapters. This comes as more and more people are seeing the need for socialist brand of feminism that attacks the root causes of sexism and all forms of oppression: the system of capitalism.

The movement to repeal the 8th amendment has mobilized young Irish people and budding activists in droves, as they increasingly reject the conservative government’s outdated laws and the remaining though waning influence of the Catholic church on the state. This is a continuation of the growing radical mood in Ireland demonstrated in 2015 when the country became the first to legalize same-sex marriage with a popular referendum.

Along with recommending abortion on demand up to 12 weeks, the parliamentary committee called for a referendum on repealing the 8th Amendment to be held next year. ROSA and the Socialist Party are poised to play a key role in the developing fight to repeal the 8th Amendment and win safe and accessible abortion rights in Ireland. Socialist feminism is on the agenda internationally, and the victory in Ireland is a lesson to the global women’s movement that when we get organized and fight unapologetically, we win!