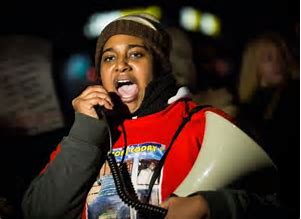 “When something happened to the Negroes in the South I said, ‘That is their business, not mine.’ Now I know how wrong I was. The murder of my son has shown me that what happens to any of us, anywhere in the world, had better be the business of us all.”- Mamie Till, the mother of Emmett Till.

On the morning of December 30, 2017, the eldest daughter of Eric Garner, Erica Garner, mother of two and a fierce fighter against law enforcement terror following her father’s death, died from a heart attack. Eric Garner was killed by New York City law enforcement officer Daniel Pantaleo, on a Staten Island, New York sidewalk on July 14, 2014, using an illegal chokehold.

Socialist Alternative/Committee for a Workers’ International extends our sincere condolences to the Garner/Snipes and Carr family and her children, Alyssa and Eric for their loss. Our movement for racial justice and ending law enforcement terror has lost one of its valiant fighters in the struggle. We lost a powerful voice that inspired millions around the world. She was only 27 years old.

The brutality of the death of Eric Garner as he cried out, “ I Can’t Breathe” eleven times, while law enforcement officers and EMT workers stood idly by, moved a nation. “I can’t breathe” a rallying cry for the Black Lives Matter movement, social justice activists. The Garner/Snipes and Carr family and specifically Erica became fierce advocates for Eric. Ramsey Orta filmed his death and is the only person involved serving a prison sentence. Orta’s video reached millions across the world, exhibiting the vile nature of racism and law enforcement terror in capitalists America.

“I’m just trying to get the truth out…”

Within days Erica began a year-long crusade to get the truth out and demand justice for her father. Every Tuesday and Thursday Erica led marches large and small with or without media coverage throughout Staten Island and New York City. Erica would not be distracted or deterred as she and family members sought an indictment of the killer cop, Daniel Pantaleo. It became clear as in all law enforcement violence cases nationally- there is a three percent indictment rate of killer cops- that the family faced an uphill battle with the New York City Police Department (NYPD) and the political establishment led by Mayor Bill de Blasio.

Erica was tireless in her pursuit to not let the world forget Eric Garner as well as the other families dealing with the same issues. She carried a heavy burden on her shoulders and an inner pain that only close family and friends could fully understand. She became an activist not by choice, but by the tragic event of losing her father so young and public.

Erica was fearless in her criticism of Bill de Blasio. When de Blasio was elected in 2013 he had massive support in the black community he talked about the “the tale of two cities” and addressing inequality as well as ending the destructive “stop and frisk” policy of his predecessor. While stop and frisk was indeed wound down, de Blasio has in many ways been deeply disappointing.

Upon winning the mayorship of New York City, de Blasio brought back former NYPD police commissioner Bill Bratton. Bill Bratton was commissioner under the hated Mayor Rudy Giuliani in the early to mid-1990s. They established an aggressive form of policing using and expanding the notorious Street Crime Unit (SCU) under the banner of “quality of life” and elements of the broken windows and stop and frisk program that would grow throughout the 90s and 2000s under Giuliani and billionaire Mayor Michael Bloomberg. Under Bratton’s second tenure from 2013 to 2016, broken windows was brought back to replace stop and frisk. Mayor de Blasio has failed in tackling the rise of homelessness and housing affordability in one of the richest cities in the world.

Erica also went toe-toe with the first black president of the United States, Barack Hussein Obama. In July 2016 she attended a national televised town-hall meeting with the President to discuss race relations and law enforcement violence against black and brown workers and youth in the nation. Erica after the televised town-hall meeting posed a number of questions to Obama. Erica demanded, “Why have no police officers been convicted or sent to jail for killing black men, and what was he doing to rid police departments of the tactical military equipment that made community protest routes resemble war zones” (NY Times, 7/21/16).

Obama exhibited an unwillingness to go any farther than “heartfelt” condolences to Erica and limited reforms that did not tackle the root of the problem like the increase of militarized law enforcement violence in communities of color. Erica Garner stated, “I feel like the black community is not being listened to, including by the president, … We can’t expect him to do everything, but he is the leader, and he can point us in the right direction to ensure that we can get justice,” (NY Times, 7/21/16).

The policies of Wall Street, billionaire class and the overall brutal conditions in black working class and poor neighborhood led to the killing of Eric Garner on Bay Street. With a natural and keen instinct, based on her own lived experience in the struggle, Erica began to pose more significant political questions and draw far-reaching conclusions about capitalism and the corporate wing of the Democratic Party. This is reflected in various twitter posts and statements.

As the Democratic presidential primary between Hillary Clinton and Bernie Sanders began to heat up in early 2016, there was an increasing emphasis on the black vote.

Hillary Clinton was the traditional Democratic Party candidate, and neo-liberal stalwart standard bearer of the party. She cynically believed that she could gain the black vote just because of her name recognition and utilizing Obama’s endorsement.

But as the campaign went on it became clearer that younger black people were rejecting the Clinton narrative including the idea that Bill Clinton was the “first black president.” In fact the Clinton presidency helped unleash the extreme conditions of higher poverty, an increase of prison construction and population, and militarized police in the black community. All of these flowed from the neo-liberal agenda as the Democratic Party moved further to the right.

Senator Bernie Sanders from Vermont railed against the billionaire class and Wall Street and spoke out for the working class, and poor experiencing the brutal consequences of corporate power and the extreme maximization of profits following the economic crisis of 2007-08. In the black community Sanders was not a known figure, and on issues of race, his campaign was very weak at the start, despite a strong track record as a young activists fighting against racial housing discrimination in Chicago in the ’60s.

However the Democratic Party candidates faced real scrutiny, demands, and protest from BLM activists wanting to know how they would curb law enforcement violence and how they would help the black community.

This discussion and debate entered the Garner/Snipes and Carr home. Eric Garner’s mother, Gwen Carr, a transit worker and member of Transport Workers Union Local 100, raised her voice demanding criminal justice reform and justice for Eric but endorsed Hillary Clinton for President alongside many others who lost family members to law enforcement violence.

Erica took a bolder stance as Sanders developed his universal themes of economic and racial justice and expanded his program decrying law enforcement terror and institutional racism. Sanders’ campaign demands were for Medicare for all, for free college education, for serious campaign finance reform, and for a $15 minimum wage. These demands spoke to Erica’s developing consciousness. Sanders would meet with Sandra Bland’s family and tour Baltimore after the rebellion following the death of Freddie Gray. Erica found in Sanders a different approach and program that more genuinely spoke to the crisis facing black America particularly around police brutality and justice for the families. In an impressive endorsement video for the Sanders campaign. Erica spoke her truth, struggle, and dedication to fighting for justice.

As Erica correctly stated in an op-ed piece supporting Sanders, “If our lives really mattered, we’d have equal access to decent jobs, good schools and affordable housing, if our lives mattered in this country, we’d have equal access to clean air, clean water and real investment in black neighborhoods. If black lives mattered in America, those who routinely brutalize us wouldn’t be the ones paid, with our tax dollars, to keep us safe” (Washington Post, 1/ 29/16).

Clinton wound up defeating Sanders with the assistance of the corrupt Democratic National Committee (DNC) and corporate-dominated leadership of the Democratic Party. After Sanders’ defeat, Erica would speak on the platform of the Green Party Presidential candidate Jill Stein highlighting the ongoing struggle against racial injustice and law enforcement terror.

The best way we can remember and honor their names and lives is to organize in our communities, schools, and workplaces for racial and economic justice. Erica’ s premature death is the product of a system that grinds you to the ground and the toll it takes on one’s health and spirit. In Erica’s final interview with independent and progressive podcast host Benjamin Dixon, she extolled what she faces daily, “I’m struggling right now with the stress and everything,” she said. “This thing, it beats you down. The system beats you down to where you can’t win” (NY Times, 12/30/17).

There are many from the political establishment, corporate media, and pundits – conservative and liberal – that will heap praise upon her, but where were they in time of great need of bringing a killer cop to justice, who continues to walk the street? Erica, family members, and the wider community was denied the justice they sought and received scorn for exposing this system of daily oppression and violence. Erica belongs to us, and we are duty bound to organize a sustained mass movement in her name to make sure the deaths of Eric, Sandra, Trayvon, Michael, Charleena, Tamir, Rekia and countless others, considered disposable and nobodies under capitalism and racism, were not in vain.

Stephon Clark Will Not Be Forgotten

The State of Black America Today

ABOUT US
Socialist Alternative is a national organization fighting in our workplaces, communities, and campuses against the exploitation and injustices people face every day. We are community activists fighting against budget cuts in public services; we are activists campaigning for a $15 an hour minimum wage and fighting, democratic unions; we are people of all colors speaking out against racism and attacks on immigrants, students organizing against tuition hikes and war, women and men fighting sexism and homophobia.
Contact us: info@socialistalternative.org
FOLLOW US
© Socialist Alternative 2019 | All rights reserved
369 Shares
Tweet
Share369