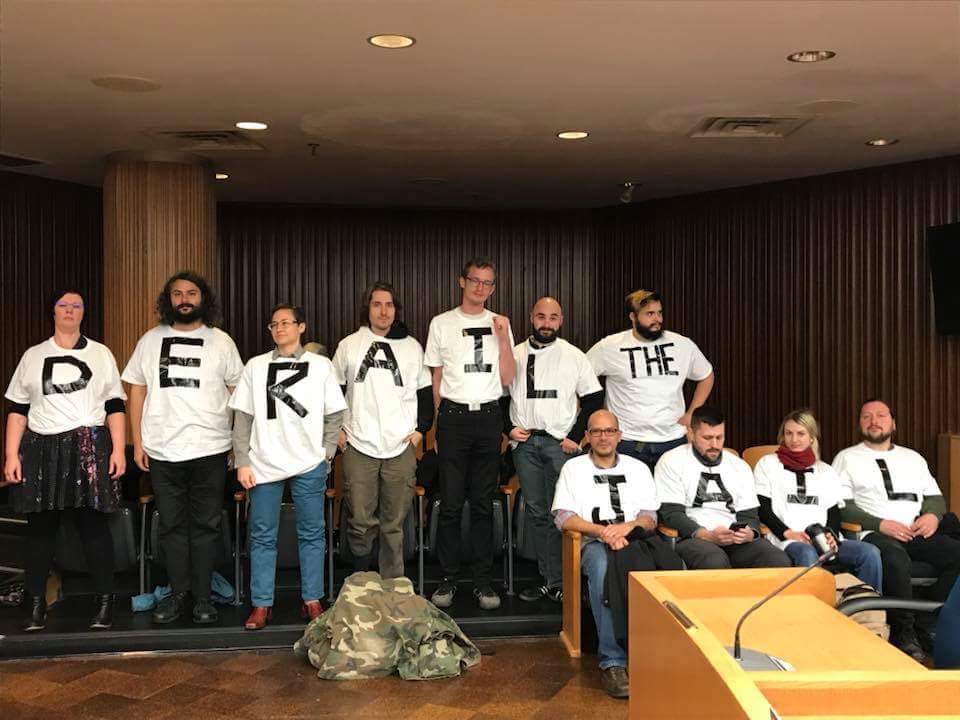 Temperatures are falling, but things are heating up in Madison, WI. At the Dane County Board of Supervisors’ final budget hearing in November, hundreds of residents furiously drowned out the Board’s vote to spend $108 million on jail construction. One supervisor, Dennis O’Loughlin, called it “the worst meeting [he’s] ever been a part of” in his 20 years on the Board.

The fight against the jail construction project was organized by the Derail the Jail coalition, including members of Socialist Alternative along with a number of other activist groups. A rousing rally including area social, racial, and economic justice activists and organizers beforehand led to the meeting being besieged by 150 people chanting to “Derail the Jail.”

The County Board has been notoriously hostile to any hint of activism during their meetings. During previous meetings activists who so much as snapped their fingers in support of people’s testimony were chided for engaging in “demonstrations.” With that attitude, the supervisors were caught unprepared for the real demonstration, the frequent outbursts during the meeting, and the eventual loss of decorum due to the highly-charged activism unfolding in the room before them. As the meeting spiraled out of control, supervisors resorting to thumbs-up/down voting, and without the ability to properly deliberate any issues, the meeting ending abruptly.

Madison – and surrounding Dane County – have worst-in-the-nation levels of racial disparity in incarceration rates. 48% of those in the county jail are black, compared to 5% of county residents. At the root are economic inequalities. In a city of 250,000, there are more than 600 chronically homeless persons on the street any given night. As is the case around the country, within these statistics are further racial disparities. 76% of the families served at area homeless shelters are black, as are 50% of individuals experiencing homelessness. This is despite the Board’s “commitment” to realize housing as a human right, to reduce incarceration, and to condemn acts of white supremacy.

The self-anointed progressives on the board justified their vote for perpetuating racist mass incarceration by presenting the jail expansion as a humanitarian program and accusing the protesters of perpetuating the status quo. While board members lamented the poor conditions of the existing jail, the mere thought of taking real steps to combat mass incarceration wasn’t even considered. Disgracefully disingenuous arguments exposed the complete hypocrisy of most Board members. Supervisor Paul Rusk took to the soapbox to express his faux empathy for those experiencing mental health crises. Refusing to acknowledge the demands put forward by the Derail the Jail coalition, he obliquely stated his wish that “there was some other place for [those experiencing mental health crises] to go.”

In the end, every single Democrat and Republican on the County Board voted for the jail expansion. Instead, opposition to the jail came from Supervisor Heidi Wegleitner of Progressive Dane, a progressive third party in the greater Madison area with six supervisors on the County Board. Wegleitner welcomed the Derail the Jail campaign and moved to amend the budget to remove the jail funding and use the freed up money on housing instead. Despite the overwhelming popular support for this move, Wegleitner was joined by only three other Progressive Dane supervisors – 32 voted for the jail expansion.

Unfortunately, Progressive Dane didn’t put forward a united front against the jail, as the other two Progressive Dane supervisors voted against Wegleitner’s amendment. One of them, Dorothy Krause, made a particularly atrocious defense of the jail, referring to prisoners as “clients” and treating imprisonment as a “service.”

This jail is still years from completion, which gives Derail the Jail, Socialist Alternative and other activist groups time to mount a larger campaign to fight this misallocation of resources every step of the way. We will work with groups around the county to bring the heat on every supervisor who railroaded this jail through. The campaign will fight for a focus on allocating funding to reducing poverty rather than more repression. Dane County needs affordable housing, stable employment, and attainable healthcare for all residents. This fight isn’t over – it’s only begun!