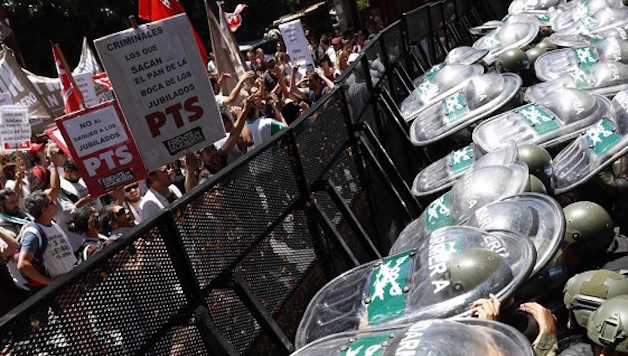 On December 15, a huge social mobilization put the government coalition of Mauricio Macri on the ropes. When the Congress of Deputies had to approve the pension counter-reform, the President of the chamber had no choice but to adjourn the plenary session and suspend the planned vote due to the huge demonstration that was taking place at the doors of Parliament.

The right-wing government tried to put an end to the mass protest by means of brutal and indiscriminate repression: no less than 3,000 police officers armed with rubber bullets, tear gas and pressure water tanks tried to disperse the mass concentration. However, the masses did not bend and thousands of workers and young people who responded to the call of the organizations of the Left and the trade unions continued to protest.

Within a militarized Congress, the indiscriminate firing by police of rubber bullets could be clearly heard. The orders to repress everything that moved reached the point that several deputies of the Left Workers Front (FIT), who were on the street participating side by side with the demonstrators, had to be taken to the infirmary in the congress due to the inhalation of tear gas and for the beatings they received. Meanwhile, Argentine intelligence agents photographed the activists who protested angrily inside the Chamber against what was happening on the street and demanding that the session be suspended.

The level of aggression unleashed by the State could also be seen in the fact that several relatives of the sailors who disappeared in the submarine “ARA San Juan”, who had been invited that day to the congress, were beaten by the police when they tried to enter the building. Relatives who only a few days before found out about an investigation into the purchase of presumably defective spare parts to favour certain businesses that could have led to the sinking of the submarine.

Many journalists were also beaten during the day while trying to carry out their work, and some have documented how once the protest was over, “a caravan of motorcyclists” of police rushed to arbitrarily detain dozens of people peacefully leaving the place.

A fight that can extend in the next months

When Mauricio Macri won legislative elections last October in thirteen of the twenty-four districts of the country, there were many who took for granted a new and stable era for right-wing politics throughout the entire country. The new counter-reforms that presumably would be introduced without major opposition had been opened with the celebration of the summit of the World Trade Organization (WTO) in Buenos Aires. An event with which the government of Macri hoped to secure important business contracts for the Argentine ruling class, and at the same time to be seen as the continental champion of “security and order”.

But the government of the right failed to curtail numerous social protests that took place during this summit. At the same time, the succulent businesses contracts which the capitalists were already salivating over could not be secured either.

The mass media tried to avoid any parallels with the historic protests in December of just over fifteen years ago that caused the fall of 5 Presidents in a period of two weeks. The ghost of the “Argentinazo” could become too large for a government that formally has significant support at the polls, but that has faced a movement of the masses which could see its support rapidly evaporate. As in the Spanish state with Rajoy, Macri’s strength is directly proportional to the oxygen that the CGT union bureaucracy and Peronist Kirchnerism provide him by refusing to organize a powerful general strike against his counter-reforms.

A few months ago, Argentina experienced the historic popular mobilizations against the taking of the life of the young 28-year-old Mapuche activist, Santiago Maldonado, killed by the police at the end of a demonstration. These protests against the pension reform show the way for the class struggle in Argentina and throughout Latin America. If Macri or now Piñeira in Chile think that they have an endorsement to do what they want, they will soon be awoke from their dream. The traditions and combativeness of Argentine workers and youth will gain new strength in this harsh school of attacks and counter-reforms.