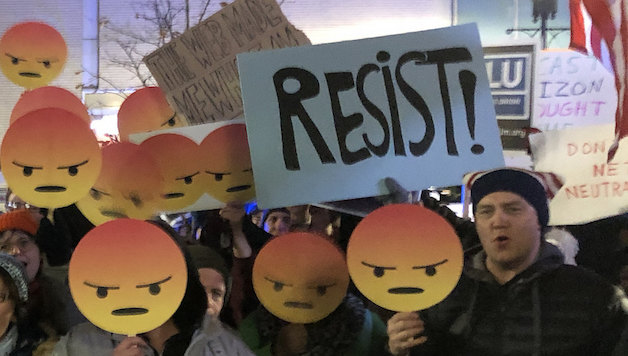 On December 14, 2017 the Federal Communications Commission (FCC) voted to give internet providers, such as Comcast and Verizon, the power to give preferential treatment to web content producers of their choosing. Under the current regulations guaranteeing net neutrality, Comcast cannot offer faster speeds to site owners for a named price, for example, but this policy of equal access could change without net neutrality.

Previous attacks on net neutrality under the Obama administration were reversed under the impact of mass outrage. But the FCC under Ajit Pai – an Obama appointee made Chairman by Trump – is pushing to reverse these regulations. Putting more control in the hands of private internet providers is a threat to the availability of information on the internet.

What is Net Neutrality?

Net neutrality is essentially a policy that internet providers should control only the quality and distribution of the mechanism (broadband) that websites use to serve content over the internet, not decide which websites have access to that broadband. The FCC is in favor of changing the definition of companies like Comcast from “common carriers” to “information services,” thus giving them the power to offer a “fast lane” to certain sites.

With the repeal of net neutrality, it will be legal for Comcast to offer higher quality streaming to content producers, like Netflix or Fox News, who could pay more for the faster option, without the consultation of the consumer or the public. This restriction would act against the free flow of information on informal and non-corporate sites such as blogs and independent news sites. In the extreme case, repealing net neutrality could result in outright censorship of certain types of content.

The companies attacking net neutrality, like Verizon, CenturyLink, and Comcast specialize in, and profit off of, the physical cables that make up broadband and internet networks. They would profit highly from being allowed to commodify access to that cable, and suppress content. We say that these broadband networks should be a public utility: we built it, we paid for it, and we should control it. However, there are other big tech companies that openly defend net neutrality like Google, Facebook, and, Netflix. Some of these corporations even engaged in “activism” organizing an online “Day of Action” in July.

Their position has little to do with an altruistic support for the democratization of information and everything to do with the fact that, as content producers and search engines, their profits and freedom are threatened by a repeal of net neutrality. They should not be considered allies in the fight for democratic control over our information sharing systems.

Google has recently come under fire for adjusting its search algorithm against left-wing websites as part of a campaign against “fake news.” And pro-net neutrality video streaming websites like Hulu and YouTube have migrated previously free content to pay services like Hulu Plus and YouTube Red. And they will fight for their freedom to control – and profit off of – the information you see if that ever comes under attack. We must not allow private monopolies to control our access to information.

These attacks by the FCC must be stopped. The repeal of net neutrality regulations are an unacceptable threat to free communication and a vital public service. But the fight back must go further to stop cable companies from continuing to push against net neutrality in the future. How can we expect Comcast to abandon a fight for its own profits?

As long as broadband remains in the hands of private industry, the fight to defend net neutrality and universal access to broadband will continue to be an uphill struggle against the powerful interest of capitalist profit. To truly win this battle, and keep the internet accessible to all, we must build a movement connecting workers from across the communications sector, CWA union members, and electricians. We should fight for municipal and national broadband, owned by the community, that can distribute internet service as a utility to all cities in the United States, without the motive of profit to limit access.