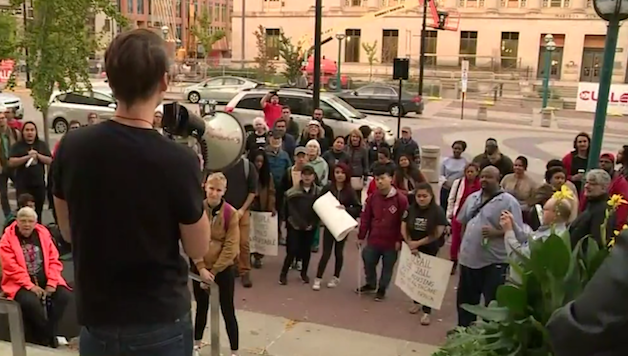 Residents of Madison, Wisconsin are showing out in force to defeat the Dane County Board of Supervisors plan to spend $108 million on a new jail construction project, and instead demand that the money be spent on affordable housing, healthcare, and other services that will benefit the community. The Derail the Jail coalition, comprised of a growing list of organizations and activists including Socialist Alternative, the Affordable Housing Action Alliance, Freedom, Inc., Our Wisconsin Revolution—Dane County, Progressive Dane, the Young Gifted and Black Coalition, Student Coalition for Progress, Young Democratic Socialists of America (UW-Madison) and numerous others, has held rallies and come out to budget and committee meetings to demand that the board keep the promises to reduce the criminal racial disparity statistics in the county. Despite a reputation for progressive politics in Madison and Dane County, the County has some of the worst racial disparities in the nation.

The county government, dominated by progressive liberal Democrats, likes to talk about criminal justice reform and fixing these issues, but has done little to do so since the workgroup recommendations from the studies they commissioned in 2015 were released. Instead, they are intent on spending $108 million ($75.6 million on the actual structures, expansions and renovations, and an additional $32 million in debt service to banks for the capital loans). This is the largest public works project in the history of Dane County, and it’s going towards making nicer cages for human beings rather than services that will ultimately reduce poverty and crime, and thus the need for jail space in the first place! This expansion will merely expand the harm done to people of color – black people represent 6% of the county population but make up nearly 50% of the jail population at any time!

How is the County Board leadership and County Executive Joe Parisi attempting to sell this plan to the voters in Dane County? By framing the expansion and renovation of the jail as a humanitarian issue! The current jail, constructed in the 1950s, resides on the 6th and 7th floors of the City-County Building in downtown Madison. The conditions are inhumane, with air contaminated by asbestos and water contaminated by lead. Cells are single occupancy only – they are too small for double occupancy – and they still use archaic barred door designs, which is a major suicide risk.

Clearly, this facility should be shut down, as it is unfit to house people, even by the horrific standards of the US criminal justice system. However, instead of pursuing options to reduce the total amount of incarcerated people in the county, local politicians have conceded to the logic of the racist mass incarceration system and instead want to build a fancier jail, based on the advice on consulting firm Mead and Hunt. The original recommendations called for a brand new facility that would have cost more than $150 million, but this was defeated in 2015 by public protest led by the Young Gifted and Black Coalition. Now Mead and Hunt proposes a third option which will close the outdated cells and replace them by expanding the Public Safety Building downtown.

The current Dane County Juvenile Detention Center houses 335 incarcerated youth  and the jail population throughout the county was an average of 759 people in 2012 . To simply close the jail in the county building, they would have to reduce the incarcerated population by 280 people. Currently, as many as 22% of incarcerated people are in the jail system solely because they can not make money-bail. That isn’t a public safety concern; it is merely a punishment for the poor! And in a county where 54% of black residents compared to 8.7% of white residents are below the federal poverty line, and black adults are eight times more likely to be arrested than white adults, it is beyond obvious which the racist money bail system most impacts. Dane County Sheriff Dave Mahoney could release these people under house supervision or monitoring today and reduce the incarcerated population by around 170 people. Ultimately, eliminating money bail would have to happen at the state level, but community bail funds can alleviate the suffering of many and both the sheriff and the Clerk of Court have options other than holding people in the jail, such as home detention or the Bail Monitoring Program.

A similar 22% of the incarcerated population in the county is already approved by the court and sheriff for work release. That means that even an institutionally unfair and racist criminal justice system has deemed these people safe to be in the public for work or treatment, unsupervised. They just have to sleep in the jail. These people would be better served in transitional or permanent housing, not a new jail cell. Another 20% of the jail population is incarcerated due to technical violations of their probation, parole or supervision. These are violations such as being late to or missing an appointment, failing a drug or alcohol test, or having a cell phone without first approving it with their supervising officer. These are not new crimes they are being charged or convicted with. They pose no public safety risk, and putting them back in jail reduces positive outcomes. These people are held at the behest of the state Department of Corrections, so in order to change this, a state (and eventually nationwide) movement will have to be built.

Around 40% of the jail population is people dealing with mental health challenges serious enough that they require psychotropic medications. Jail is not helping these people. It doesn’t matter how advanced or high tech or humane the jail is — these people need treatment, and that treatment shouldn’t be behind bars. There are a significant amount of people dealing with substance abuse issues, and numerous chronically homeless residents who end up behind bars. Health care and housing would help these people far more than locking them up.

Our best ally on the county board, Heidi Wegleitner of the Progressive Dane party, has been the most outspoken public official against the bill, and has advanced budget amendments to strike the funding for the jail from the 2018 budget and instead use that money on housing and human services. However, the rest of the board remains silent on their position or is pro-jail. These alternatives are pushed to the backburner, and the jail project is rushed forward in time for the 2018 budget. Why? Who is winning here? It can’t be the community or the prisoners – incarceration has consistently shown nationwide to fail in its stated purpose of rehabilitation. Who actually wins is Mead and Hunt, who has been paid at least $1.3 million in study and consultant fees, the construction firms that will build the expansion, and the banks that will profit off the interest on the loans made to the county for the construction. Public officials instead need to embrace more innovative and just solutions to problems of crime and poverty in the county, rather than expanding the jail. They have all the options and data laid out in front of them to do this, but lack the political will or ingenuity to embrace alternatives to incarceration.

The Derail the Jail Coalition has mobilized around the following demands:

That’s how you BUILD the PEOPLE, NOT the JAIL!

Ultimately to solve the problem of racist mass incarceration, we also need to connect this fight with movements working on intervening much earlier in the incarceration pipeline. Those include fights against poverty (jobs, living wages, access to resources) lack of healthcare, lack of quality access to education for all as well as community control of police and vastly curtailing policing as the response to the failure of capitalism to meet people’s needs.

Winning these demands will require much larger and more consistent mass mobilizations against the racist mass incarceration state in Dane County and the State of Wisconsin. It will require an understanding on the part of activists that our logic and rational arguments aren’t going to be enough. We will have to change the political balance of power through organizing and preparedness to disrupt business as usual.