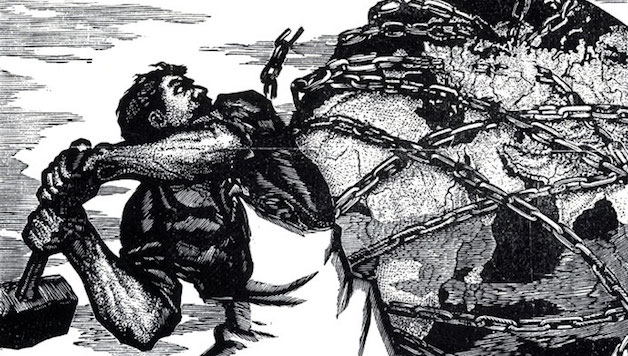 The Bolsheviks had no illusions that socialism could be built in a single country, especially a war-torn, semi-feudal country like Russia. From their point of view October 1917 was the beginning of a world revolution. And the success of the Russian Revolution did herald a revolutionary wave across Europe. Revolutions and revolutionary situations broke out in Germany and Finland in 1918, Hungary in 1919, Italy in 1920, and Germany again in 1923. And an intensification of class struggle spread all across the world, even reaching the United States.

Organizing the working class on an international basis has long been a key aim of Marxists, going back to the First International in Marx’s time. The Bolsheviks came of age as part of the Second International. But that International degenerated when most of its sections supported their own ruling class in World War I. After the Russian Revolution, the Bolsheviks immediately put out the call for a new, Third International. This international, also called the Comintern, was founded in 1919 in the middle of the European revolutionary wave.

Unfortunately, the revolutionary wave was defeated, leaving the Soviet Union isolated. This defeat played a key role in the emergence of the conservative, parasitic Stalinist bureaucracy. This bureaucracy spread its control throughout the Comintern. It lost its role as a mass revolutionary international and was converted into an instrument of the Kremlin’s foreign policy which prioritized the interests of the bureaucracy over workers’ struggles. The Comintern supported Chiang Kai-Shek in China in the late 1920s even as he had Chinese communists massacred; it stood by as Hitler came to power in Germany; and it actively sabotaged the Spanish revolution in the late 1930s.

In response to this, the followers of Russian Revolutionary Leon Trotsky strove to build a new Fourth International which could organize the revolutionary, anti-Stalinist wing of the working class.

The Committee for a Workers’ International

The Committee for a Workers International was founded in 1974 as a continuation of the politics of Lenin and Trotsky. Socialist Alternative in the U.S. stands in political solidarity with the CWI. The founding conference had representatives from 12 countries, the largest section being the Militant Tendency in Britain. The Militant Tendency, then part of the British Labour Party, now the Socialist Party in England and Wales, went on to lead mass struggles including the struggle against the hated poll tax which forced Margaret Thatcher to resign in 1990.

The CWI was born in the middle of a new wave of revolutionary upheavals, including in Portugal and Greece in 1974, and Spain in 1975. The CWI grew out of these movements first primarily in Europe and later built a base in a number of countries outside Europe including South Africa under apartheid, Sri Lanka, Nigeria, Chile and Brazil.

Today the CWI is active in over 40 countries. We played a leading role in organizing the  wave of strikes in South Africa following the massacre of miners in Marikana in 2012. We recently played a leading role in the successful mass struggle against water charges in Ireland where we also have three members of parliament and numerous councillors. We are in the midst of a struggle in defense of democratic rights in Hong Kong. In the current struggle for Catalan self-determination, our sister organization in the Spanish state has been organizing massive student strikes against the crackdowns of the Rajoy government.

Internationalism isn’t just a matter of solidarity with struggles in other countries. Many American activists in the past period have rightly taken inspiration from the Arab spring, and the movement around Hugo Chavez in Venezuela and Syriza in Greece. But all of these movements have faced defeats and setbacks as well, which have also had international repercussions. This is why it’s necessary, not just to cheer on the international struggles, but to organize the working class and its revolutionary wing on an international basis, to assure these movements success. That is what the Bolsheviks stood for after the Russian Revolution. And it’s what Socialist Alternative and the CWI stand for today.