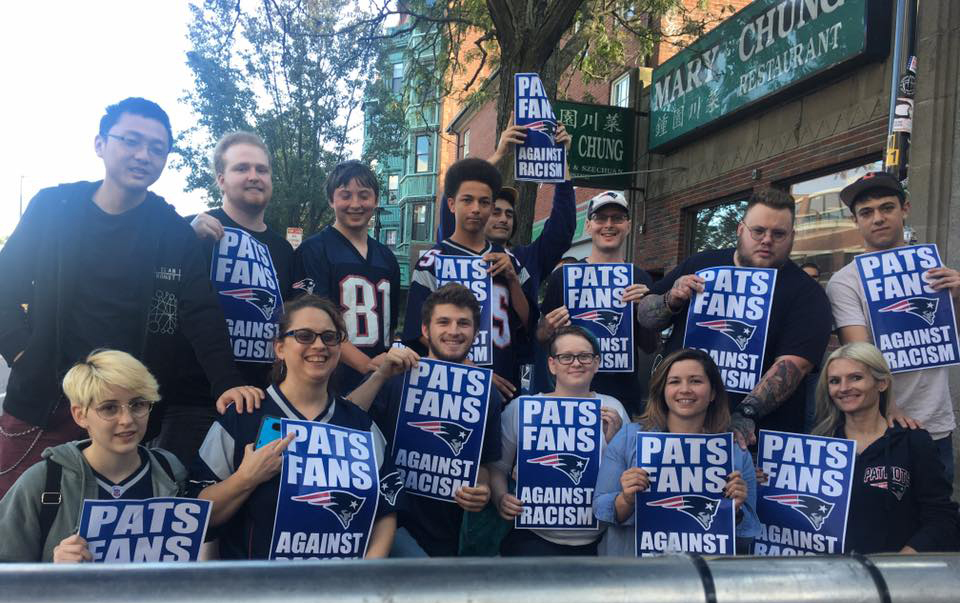 One month on since Trump’s vitriolic words about NFL players taking a knee against racism and NFL fans are still watching weekly to see which players stand, sit, and kneel. Inspired by players, members of Boston Socialist Alternative recently launched a new initiative called Pats Fans Against Racism (PFAR). PFAR’s goal is to bring together Patriots fans who stand against racial injustice and police brutality while defending athletes’ right to protest. We held our first event, a game watch party, on Sunday, October 15.

NFL: Who’s Football is it anyways?

For a few hours every week, people get to disengage from the stress of working to pay the bills and watch world-class athletes play football. Millions of people treasure this part of their week, but nobody loves the $12 stadium beers, $6 bottled waters, billion dollar TV contracts, and the corporate sponsorships and advertisements that increasingly dominate the sport.

The NFL, a corporation whose primary concern is profit, tries to appear apolitical. But a closer look reveals a substantial number of NFL owners maxed out individual donations to political candidates and made $100,000+ contributions to PACs supporting both Democrats and Republicans. They also contributed at least $7.75 million to Trump’s inauguration ceremony.

Though many of these same owners initially condemned Trump’s abhorrent remarks, recent attempts to suppress the players’ peaceful protests shows which side they are really on. The side of profits and ratings, not justice and equality. The recent comments by Houston Texans owner and Trump campaign contributor Bob McNair stated, “We can’t have the inmates running the prison” at the NFL owners and players meeting in New York City two weeks ago. It has caused a firestorm, protest by several Texans players and further highlights the contempt the owners have for the players’ protest against racial injustice and law enforcement violence.

PFAR believes there are many NFL fans who want to take a stand against racism, police brutality, and improve their communities. Going to watch a game with other like-minded anti-racist Patriots fans is a step to people getting more active in their communities, in the struggle against racism and other injustices working people face under capitalism.

Non-political NFL fan groups already already exist, but with players getting political around just causes and being victimized for it, we have a duty to make our fandom political as well. This is inline with fan clubs the world over which often have overtly political stances.

To capture this untapped energy, Boston Socialist Alternative and PFAR hosted our first ever game watch party at a family-friendly bar in Cambridge. The Pats beat the Jets and during commercial breaks and halftime we had political discussion about #TakeAKnee, racism in the U.S., and other current issues and movements. Everybody was excited about future events and we plan to host another watch party in the coming month.

Players need to know they have fan support as pressure increases from corporate sponsors and NFL owners, scared to lose profit. The NFL couldn’t exist without players and fans, but it could easily do without corporate sponsors and profits. We need to build the pressure to oppose the conservative weight of big business on our sports.  PFAR was easy and quick to get together. We created a Facebook page and flyered near the bar where we planned to watch the game. Then we showed up, watched football, and discussed how to build the #TakeAKnee movement.

Building social movements and getting organized is the most effective way to demand and enact change. PFAR challenges you to make a Fans Against Racism group in your community.