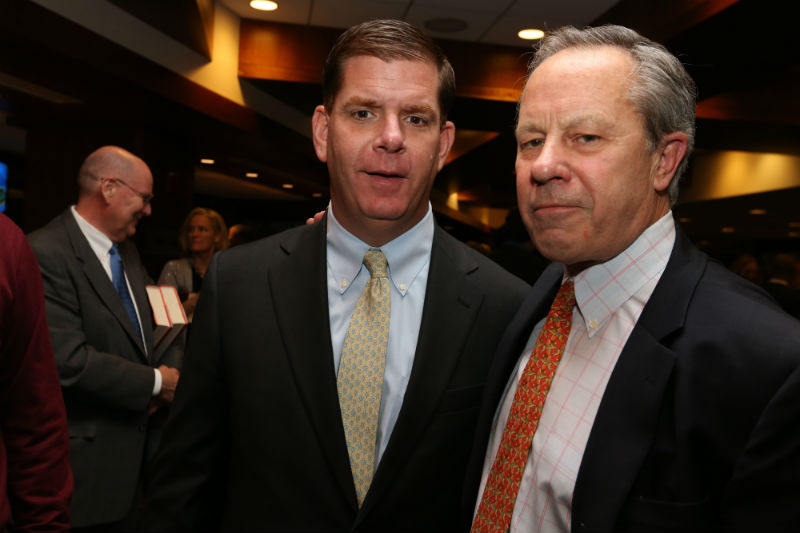 Boston is the most unequal city in the country in terms of income inequality. Real estate developers are raking in super profits while thousands of people are being gentrified out of their neighborhoods and cannot find affordable homes to live in. Public education budgets are consistently under attack by City Hall and the unelected School Committee, the city is suffering from an opioid epidemic that is on pace to kill hundreds this year, and institutional racism continues to oppress and lower the living standards of Black and Hispanic working people. In fact, the median net worth of white people in Boston is $250,000, Hispanic people is $3,000, and of black people is only $8. The life expectancy of those living in Back Bay, a predominantly white neighborhood, is 91 years old, while the life expectancy of those living near Franklin Park, a predominantly black neighborhood, is only 58 years old.

With one week until Boston’s Mayoral election it’s important to review Marty Walsh’s first term and assess if he has truly followed up on his promises to protect working people’s interests in Boston.

Since the election of Donald Trump, Walsh has taken a public position against the President’s bigoted, anti-immigrant agenda, especially with the mayor’s promise to make Boston a sanctuary city. Walsh’s commitment that Boston Police won’t collaborate with ICE is a positive step. But if Walsh is serious about making Boston a sanctuary city, he must go further. A real sanctuary city must be a place where immigrants can afford to live in the first place! That would include affordable housing, access to fully funded education, accessible healthcare, and democratic control over where taxpayer dollars are spent.

Campaigning in 2013, Walsh pledged to fight for ordinary working people, union and non-union, and as a recovering alcoholic himself, to help take care of those suffering from drug and alcohol addiction. Unfortunately, he has not adequately addressed these issues.

In 2014, he fought to host the 2024 Summer Olympic Games, despite opposition from thousands of Bostonians, upset at the lack of transparency in the process. Hosting the Olympics would have broken up communities and cost taxpayers millions of dollars on unnecessary infrastructure, short-term infrastructure. Instead, the No Boston Olympics Campaign, which Socialist Alternative took part in,  demanded that infrastructure investments should be focused on the needs of  the people who live and work in Boston—not decided by unelected CEO’s and the International Olympic Committee.

In 2016, the Walsh administration persuaded General Electric to move its headquarters to Boston by giving the company $145 million in incentives—almost five times the amount of that year’s public education deficit of $30 million. Despite community resistance, Walsh teamed up with Republican Governor Charlie Baker to push the deal through.

When in March of 2016 over 3,600 Boston Public School students walked out of class to protest the budget deficit and cuts, Walsh condemned the protests and implemented the cuts. Although they now have a contract, the mayor stalled on negotiations with the Boston Teachers Union for 18 months, 10 of which the teachers endured a wage freeze. Walsh has been criticized by many for making quick deals with the police union while stalling negotiations with teachers.

The abrupt closing of the Long Island Bridge forced hundreds of homeless and recovering drug addicts to evacuate the island’s homeless shelter. To this day, hundreds of the 1,300 homeless families and 3,000 homeless children in Boston are still suffering from this decision.  Walsh also oversaw the privatization of the last remaining public methadone clinic in Boston.

When white supremacists planned a rally on the Boston Common in August, Walsh initially came out strong against them. However, the day before the rally the mayor urged everyone to stay away from the Common and the peaceful counter protest.  The 40,000 that defied Walsh and did show up to denounce the white supremacists demonstrated that when workers and youth take to the streets to denounce racism, hate, and bigotry, the far right will retreat. Over 60 white supremacist rallies were canceled around the country in the days following. If instead, Walsh had taken a bold lead in building the counter protest, tens of thousands more would have participated and he could have helped to even further strengthen the anti-racist movement, providing a model for other cities going forward.

Last month Walsh set up an immigrant defense fund to try and give immigrants, refugees, and temporary status holders fairer court representation. But it was only a few months ago that Walsh said in an interview with the Boston Herald that getting the city “involved in the business of paying for legal representation” for immigrants is a “dangerous, slippery slope.” This decision didn’t from the goodness of Walsh’s heart, but as a result of the pressure from the immigrants rights movement rallying against the rescinding of DACA and for a more immigrant-friendly Boston.

Many progressives are excited about Tito Jackson, who is running to the left of Marty Walsh on many issues. He wants to put more money into public education, was against the GE move to Boston, and supports some local grassroots campaigns such as the Socialist Alternative initiated Save Our Community Centers Campaign in West Roxbury and Grove Hall.  It’s also positive that Jackson wants to change the Inclusionary Development Policy to create more affordable housing.

Yet unfortunately, Tito is taking campaign contributions from corporations, including $1,000 from the CEO of Suffolk Construction—the biggest developer in Boston and a major player in Boston gentrification. We think that Jackson should call for taxes on big developers and the rich to fund new, high quality affordable housing and for rent control to keep landlords from raising rents faster than inflation, as Socialist Alternative candidate Ginger Jentzen is calling for in Minneapolis.

Unfortunately, Tito’s plan for the housing crisis does not go far enough; politicians who take corporate money are beholden to corporate interests. Throughout the campaign, Socialist Alternative has called on Tito Jackson to return the $1,000 to Suffolk Construction in a public fashion and pledge to not take any more corporate money. The Democratic Party establishment has long dominated Boston, and yet working people and the oppressed are still not represented. If Tito is serious about representing a left alternative, he should break with corporate ties, and run independent from the corporate-controlled Democratic Party.

Improvements in the lives of working people have always been achieved not because corporate politicians suddenly decided to be kind and act against their corporate backers, but because mass movements forced them to make concessions. This was demonstrated in December 2016 when housing activists in Seattle built a movement that entirely stopped the construction of a new $160 million police headquarters and instead got $29 million allocated to building new affordable housing.

These sorts of movements, independent of corporate money, and with clear and bold demands, are what is needed to increase the living standards of all people in Boston. Currently, people can join Socialist Alternative in getting involved with the efforts of Raise Up Massachusetts, who are collecting signatures to get two important referendum questions on the 2018 ballot: for a $15 statewide minimum wage and paid family medical leave. Raise Up Massachusetts has already collected enough signatures for The Fair Share Amendment—a state Constitutional amendment that will increase taxes on those making over $1 million annually and spend the extra $1.9 billion from the tax solely on public education and public transportation—to be voted on as a ballot measure in 2018. Attempts by the establishment to lessen or negotiate on these demands before they go to the ballot should be rejected. A strong grassroots movement leading up to the 2018 election could win these victories and be used as a starting point to fight for even more, such as taxing the super rich to fund affordable housing, addiction treatment and other healthcare facilities, jobs programs, and the reconstruction of the Long Island Bridge.

Socialist Alternative supports candidates who are fully accountable to and a part of these sorts of movements. We need candidates who are not tied to big business and are who are not afraid to stand up to the political establishment. Socialist Alternative candidate Ginger Jentzen in Minneapolis, who went from leading the successful movement for a $15/hr to run for city council, has received huge support from working people and raised more grassroots donations from Minnesota than any other candidate. In fact, despite not taking corporate cash she recently set the record for the most money raised ever for a City Council campaign in Minneapolis history. When these sorts of candidates are elected into office, they can use their positions to further our movements not just in their respective cities, but also spread them throughout the country.

Regardless of who is elected Mayor next week, movements of ordinary people will need to be the driving force behind positive change in our city.  Socialist Alternative will continue to help build these movements, while also building support for the idea of launching a new party for working people, independent from corporate cash and power, and for socialist ideas – the need to fight for a whole system that is driven not by profit, but by human need. Join us!