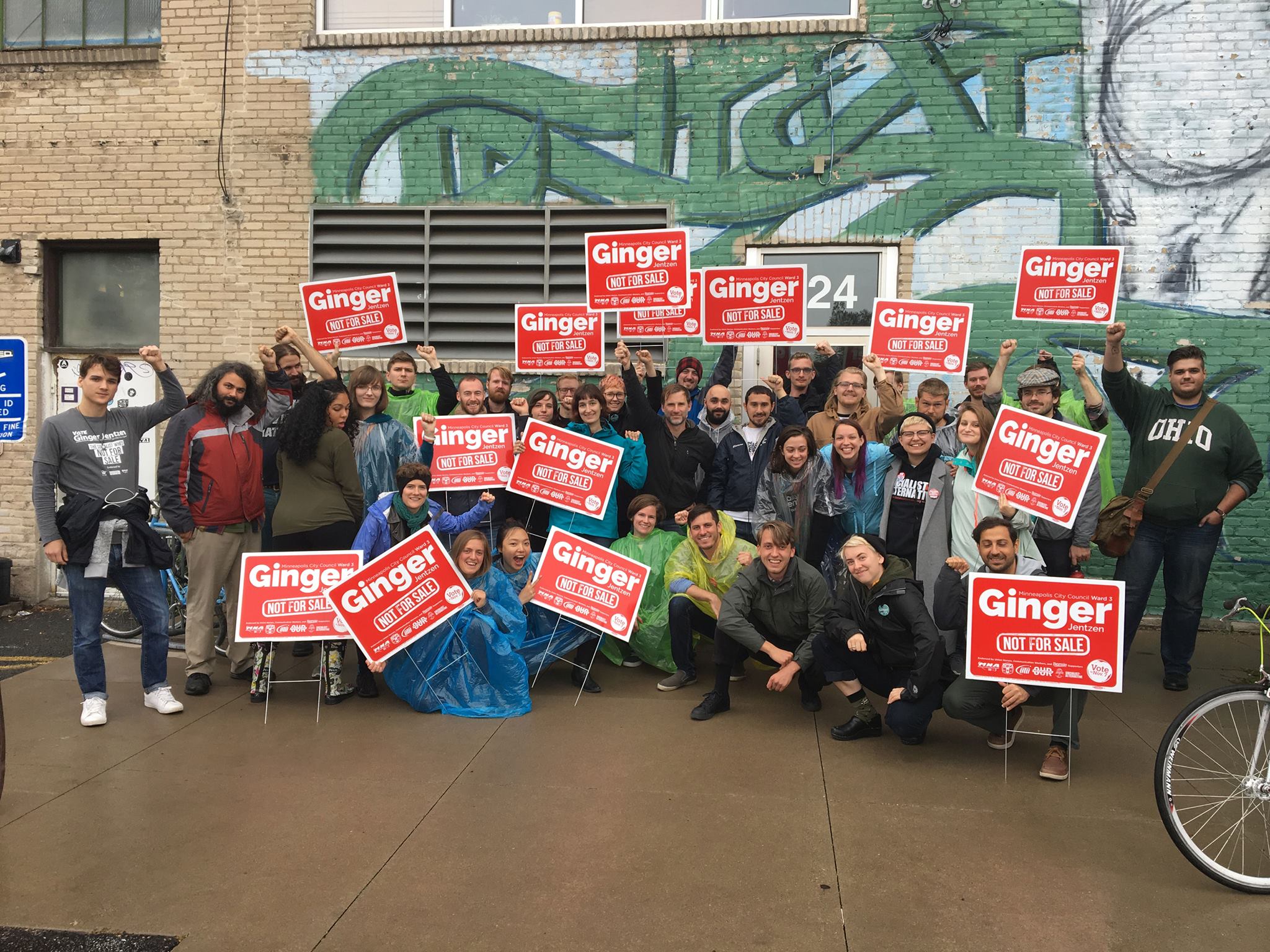 The attacks have begun. The Minneapolis StarTribune reported today that downtown developers and business donors plan to spend big through at least three corporate political action committees (PACs), including a Republican-aligned PAC, to influence the city elections in favor of the 1%.

According to the article, “[Downtown Council President Steve] Cramer, Jonathan Weinhagen, president of the Minneapolis Chamber, and Kevin Lewis, president of the Building Owners and Managers Association, used their e-mail soliciting donations to highlight Ginger Jentzen, a Socialist candidate for the council seat that will be vacated by mayoral candidate and Council Member Jacob Frey.”

“If you thought it was impossible for a committed Socialist to run on a platform of rent control and establishing a municipal income tax … meet: Ginger Jentzen,” they wrote, adding that she is the “leading candidate” in the Third Ward.”

This call to action from big developers and corporate donors is in response to the tremendous momentum Ginger’s campaign has built. Earlier in the day, local newspaper City Pages exclaimed: “Socialist Ginger Jentzen is the greatest city council fundraiser in Minneapolis history.” By appealing to working people, Ginger has built a powerful campaign funded entirely by grassroots donations from working people.

Like Bernie Sanders, our campaign is not for sale. Our record-setting $140,000 comes from over 2,500 individual donations, with a median contribution of just $25, and more donations from Minnesota than any other candidate in the race.

Let’s make history. We can overcome the corporate cash from the Developer and Republican PACs, but we need your help.

Developers are trying to buy this election to keep City Hall in their pockets and stop our movement for rent control and taxing the rich. The “Minneapolis Works!” Developer PAC is even teaming up with a Republican PAC, the “Minnesota Jobs Coalition,” to pour corporate cash into backing pro-developer establishment candidates.

This past week, “Minneapolis Works!” flooded Ward 3 and other neighborhoods with mailers riddled with distortions, and painting pro-developer, establishment candidates as progressives in an attempt to confuse working people.

Infuriated by the historic transfer of wealth from CEOs to ordinary workers, with the passage of the $15 minimum wage and paid sick leave, and fearful of rent control, big business is determined to defeat candidates who threaten their interests. The PAC’s donors include millionaire developer Steve Minn; Downtown Council President Steve Cramer and CEO of the Minneapolis Chamber of Commerce Jonathan Weinhagen, both of whom fought ferociously against a $15 an hour minimum wage and paid sick leave.

According to the StarTribune, “[Minneapolis Works!] is also asking for corporations to donate to the Minnesota Jobs Coalition, a Republican-leaning organization, which will funnel the money to Minneapolis Works.”

This is only the beginning. Ginger Jentzen’s campaign has been on the cutting edge of calling for rent control and taxing the rich. We can expect waves of attack mailers, potentially radio and TV ads, and more, all designed to mislead people in the final days before the election on November 7.

But we can overcome the corporate PACs and their war chests through the power of our grassroots organizing.

Kshama Sawant’s Speech at the Rally Against the Recall