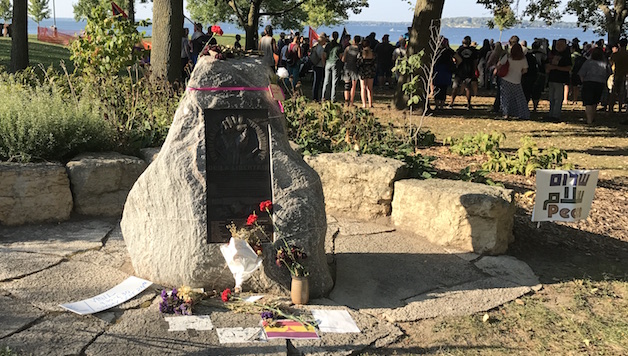 Residents of Madison, Wisconsin received a rude reminder that active fascists exist in their city when a monument dedicated to Wisconsin volunteers who fought against Franco in the Spanish Civil War was spray-painted with swastikas and the phrases “Trump Rules” and “Antifa Sucks”. The monument, which stands near the Gates of Heaven synagogue, Madison’s oldest Jewish house of worship and one of the oldest in the United States, was found defaced on the morning of Wednesday, September 20, just before the start of the Jewish holiday Rosh Hashanah. The choice of a low-key monument dedicated to antifascists, and its location near a historic synagogue on the beginning of a prominent Jewish holiday, reveals the level of political consciousness of the perpetrator or perpetrators.

Outrage spread virally throughout the community, and the monument was cleaned within hours of the discovery. Just as rapidly, activist organizations on the left in the city began to organize for a rally against neo-fascism. Spearheaded by the Madison and Milwaukee chapters of the General Defense Committee of the Industrial Workers of the World (IWW), and co-sponsored by 17 other organizations including Socialist Alternative Madison, the September 24 rally drew an enthusiastic, defiant, and diverse crowd of about 150 people. Speakers stressed the need to prepare and organize now to be able to defend ourselves and our movements from the threat of the far right and neo-fascism. Teddy Shibabaw spoke on behalf of Socialist Alternative.

“Our side is stronger, but we cannot afford to be complacent,” stressed Shibabaw in his speech. He also spoke of the importance of recognizing that while the far right is becoming emboldened in the wake of Trump’s election and presidency, both the Republicans and Democrats bear responsibility for the current state of affairs.

Teddy Shibabaw stressed that the union leadership should be using their power to build movements in the streets to resist Donald Trump and the far right. “Trump and fascist actions speak to profound crisis of capitalism, a system beset with one crisis after the next, a political elite which has completely lost its way and experience basic crises of governance. It has highlighted more than ever, the need to overturn this system and build a socialist society where people and the planet are put before profit and the hatred and bigotry that it promotes.”

A generally anti-capitalist and pro-mass-movement sentiment was prevalent in each of the speakers at the event.

The development of mass movements are critical in the face of growing far-right influence in American politics, and the speed and success of this event shows a growing level of consciousness about the need to organize from below. Defeating the far right, and ultimately, capitalism,  will require a mass movement and an independent working-class party that not only fights hate in all forms, but fights for jobs, housing, healthcare, and education for all. We cannot rely on the corporate-dominated Democratic Party to build this movement; only the working class can!