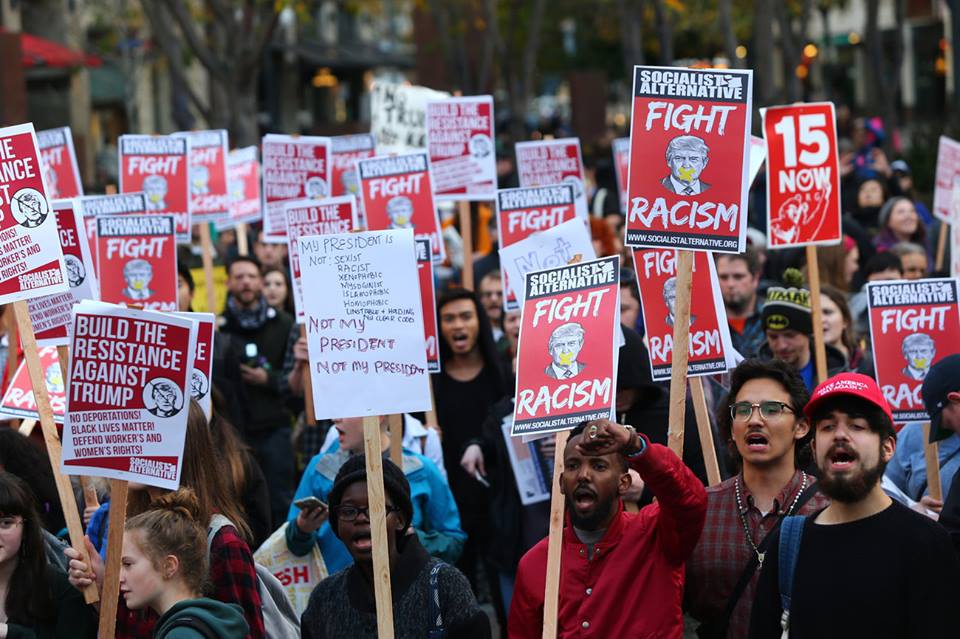 **UPDATE: If you can’t reach the Mayor of Franklin – please send a text or email (sample text/email below). OR call or text one of the City Council members of Franklin (phone numbers below)**

In Ohio, Movement for the 99%, Socialist Alternative, and other community members are in a struggle against the Right and the local ruling elite over removing a plaque commemorating Robert E. Lee.

In this struggle, one of our community organizers has been targeted by the Right with death threats – the Sons and Daughters of the Confederacy, potentially members of a local militia, and the Three Percenters. We have Facebook video footage of them reading our organizer’s home address out loud, making threats of having his grandparents’ address, and bragging about attending KKK rallies and meetings.

Our community organizer has also been intimidated by the Vice Mayor of the City of Franklin. The Vice Mayor posted our organizer’s name and phone number on Facebook and appealed for people to call him in retaliation for leading the effort to remove the plaque. (See below for full background).

The Right is mobilized to protect the plaque and is emboldened by Trump’s incendiary bigotry and his pardoning of arch-racist Sheriff Joe Arpaio to threaten the Left.  The far right has shown up to City Council and other government meetings in force, with confederate flags, wearing “Make America Great Again” hats, and some of them carrying guns. They have also physically and verbally confronted our organizers and community members opposed to the plaque.  We are asking for working people and youth across the country to help us with this struggle against the Right and their supporters in government.

We are launching a National Solidarity Call-In Campaign, starting on Monday, August 28 and ending on Friday, September 1 during business hours (9am – 5pm, Eastern Standard Time), that targets the Mayor of the City of Franklin.(See script and contact information below). To track our progress, we are asking that everyone indicate on the Facebook Event Page that they called into or emailed the Mayor.

This solidarity campaign is vital for protecting this community organizer – but also for pushing back the intimidation tactics of the far right – as well as settling the removal of the Confederate plaque.  Across the country, the Right is recoiling from the overwhelming opposition to their bigotry and violence from virtually every corner of society. Democracy Now! recently reported that 64 so-called “free speech” rallies hosted by the Right-wing forces have been canceled over the past days.

We scored an initial victory with the plaque being temporarily removed from public view, but the fight is not over. When the city originally removed the plaque, the local ruling class was reacting in fear due to the outpouring of anger at Trump and the events in Charlottesville. The simple call-in campaign initiated by our organizer made city officials quickly crumble and resort to deplorable intimidation tactics. Since then, the mobilization by the Right has stiffened their spines. This past Thursday, government officials committed to finding a new place for the plaque.

We are asking everyone to call the Mayor of the City of Franklin (see script and contact information below) beginning on Monday, August 28 and ending on Friday, September 1, during business hours (9am – 5pm, Eastern Standard Time).  We are also asking for you to contribute $25, $50, or $100 for legal expenses, an emergency fund to protect our organizers against physical threat, and to help support a rally in the City of Franklin.

Send a text message to the Mayor or City Council:

If you can’t reach the Mayor or you have time we strongly encourage you to call or text the other members of the City Council:

“Hi, my name is [First name] and I oppose the City of Franklin returning the Robert E. Lee plaque for public display.

I’m also calling to express my outrage at the conduct of Vice Mayor Carl Bray. His intimidation tactics of publicly sharing the name and phone number of the community organizer leading the effort to remove the plaque and asking people to call him in retaliation is absolutely unacceptable behavior for an elected official, especially after the violence and murder committed by white nationalists in Charlottesville.

Finally, I call on you:

Will you do this?”

On 8/16, an organizer with Movement for the 99% and Socialist Alternative initiated a call-in campaign to have a plaque dedicated to Robert E. Lee removed from the neighboring city of Franklin.

Responding to the call, people from across Ohio, primarily people associated with the group Indivisible, bombarded the Vice Mayor of Franklin’s office line with the demand to remove the plaque. Under pressure, the City of Franklin removed it in the middle of the night!

However, in retaliation, the Vice Mayor of Franklin put our organizer’s phone number on Facebook and encouraged people to call him. In short order, he started getting death threats.

On Monday 8/21 the City of Franklin City Council met to discuss the fate of the plaque. The Sons and Daughters of the Confederacy mobilized their base, with 50+ right wingers showing up with confederate flags and some with guns. We have a video of some of them bragging about attending KKK rallies and meetings. They also talk about having our organizer’s home address and his grandparents address.

The organizer and a few other supporters went to the city council meeting to make the case for keeping the plaque removed. The chamber was packed to capacity with the Right. During public comment, our organizer lambasted the plaque and called out the Vice Mayor for his intimidation tactics and the resulting threats made on his life. The Vice Mayor responded by having the organizer removed by the police.

Outside of the meeting, the Right threatened our organizer. We have Facebook video footage of them sharing his home address out loud. Despite being overwhelmed and threatened by the Right, the police threatened to arrest our organizer no less than 4 times, for simply standing across the street!

On Thursday, August 24, the Township of Franklin met and again the Right was fully mobilized. The Township Trustees took a step toward returning the plaque to public display, but have not definitively said when and where the plaque will go.