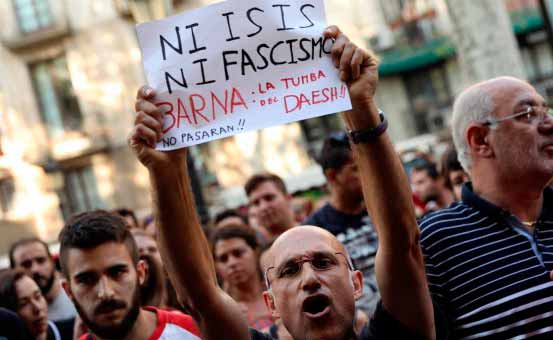 Solidarity with the victims! Down with terrorism and imperialist war! Their wars; our dead!

On August 17, a brutal terrorist attack on Las Ramblas in Barcelona saw a van drive more than half a kilometer, running over hundreds of people in its path. The tragic result of this attack was the death of 13 people, with more than 100 injured (some critically) and a generalized commotion among the people of the city who saw how a holiday was transformed into a nightmare. The attack, which Islamic State immediately claimed responsibility for, was replicated hours later in the town of Cambrils in Tarragona where 5 terrorists were shot and a women, which one of them stabbed, died.

Izquierda Revolucionaria and the Sindicato de Estudiantes wish to share our pain, support and solidarity with the victims, their families, friends and all those who lived through those moments of terror and feared for their lives.

Millions of workers and youth around the world feel united with the victims of this horrific terrorist attack, and with the thousands of people who led a great wave of solidarity with them: those who queued for house to donate blood, who offered up their houses, taxis, clothes, cars and shops to help the victims. A fantastic show of solidarity with those who have seen up close the barbarism which has also hit the streets of Paris, Nice, Brussels, Manchester, Orlando etc, but which is also all too familiar to millions of innocent people in other parts of the world, such as the Middle East and Africa.

Of course there has also been the state response, the laments and hypocritical calls for unity, from those who have supported and instigated imperialist wars which have destroyed entire countries to fill the pockets of a handful of multinationals and guarantee the strategic interests of the big powers. Their apparent consternation at the massacre in Barcelona seems to not have been deserved by the thousands of people who die every day in Syria, Iraq or Afghanistan, wars which the PP and other right wing leaders in Spain have supported, together with the “defenders of peace” in the EU and USA.

Merkel, Hollande, Macron, May, Trump, and Rajoy… they continue with the same objective of Aznar, Blair and Bush in their day, when they launched the invasion of Iraq 14 years ago. The results are clear. These wars have brought neither peace nor freedom, but barbarism, death and destruction, as well as millions of refugees fleeing intolerable situations who are treated in an inhumane manner at the gates of Europe.

Using terrorism to spread the poison of racism and islamophobia

We have seen on many other occasions how the defenders of the system take advantage of terrible events such as terrorist attacks in different cities. With the words of “liberty,” “democracy” etc, they use these attacks as excuses to justify measures against workers and youth, undermining our democratic rights and spreading racist and xenophobic poison.

This has been the approach of the right wing media, promoting racism and hatred of muslims. Individuals like Alfonso Rojo (media commentator) have stated in response to the attack: “maybe those who encouraged immigration of non-Spanish speakers into Catalonia have to account for this.” Isabel San Sebastián directly connected terrorists with Muslims saying: “we threw them out of here once and we will do it again.” These are not only individual declarations, they represent the feeling and opinion of the PP and the right wing.

At the same time, for the leaders of the PP, Ciudadanos, the Monarchy, and all those who made profits from the wars and deaths of millions, their clamour against terrorism is only a façade, hiding concrete class interests. None of them have any problems with the big arms sales deals between the Spanish government and Saudi Arabia even though it is publicly known that Saudi Arabia allegedly finances Islamic State, and many of the arms sold to this government by Spain are used in the war in Yemen. Hey also have no problems with Erdogan’s regime in Turkey, which protected Islamic State for many years and with whom the EU signed a shameful agreement on the question of refugees.

Their arguments and hypocrisy to justify criminal wars, the murder of innocents and racist hate, though they are wrapped up in “anti-terrorist” indignation, do not fool us. We know the real motivation of their policies of cuts, austerity and attacks on democratic rights, and denounce them. The workers and youth of Barcelona also know this, which is why they expelled groups of fascists from solidarity demos following the attacks. Their wars, our dead!

The terrorist attack and the Catalan movement for self-determination

The spokespeople of the capitalist class have not only made individual racist and hypocritical statements. The day after the attack, the editorial of El Pais newspaper took the opportunity to attack the “process,” linked to the movement for self-determination in Catalonia. They called on the “Catalan government and Catalan political forces to apply themselves to the real problems of Catalonia” and end the “secessionist chimera.” This terrible terrorist attack could now be used to crack down further on the democratic right of the Catalan people to decide its future.

Grotesque arguments have been employed against the right to self-determination and in favour of the criminalisation of all those who defend them. We have not read any El Pais editorials which talk about the “real problems of Catalonia”, as they say. These problems are those of cuts, in health and education, the sacking of teachers, repression against social movements and evictions. Their hypocrisy has no limits. If the racist poison of the right wing was not enough, they also try to divide workers and youth in Catalonia from those in the rest of the Spanish state.

Capitalism sill use any excuse to divide the oppressed, via fear, xenophobia or any other means. In doing this, they always have the same objective, to turn us against each other, we who have gone onto the streets against the attacks of both the PP and the Catalan capitalists and right wing parties, who also seek only to defend their privileges. They want to divide those – the working class and youth movement – who have shown we have the power to defeat them when we fight.

The horrific murders which have taken place on the streets of Barcelona, and the repulsive reaction of the capitalists and their media show once again the rotten morality upon which this system and its representatives are based. While we are dominated by the right wing, by the Spanish, Catalan or any other bourgeoisie, workers and youth will never achieve real progress. The class interests of the capitalists have no place for rights, freedom or dignity. Those who pay for the consequences of their policies, who suffer the consequences of terrorism, war, unemployment and poverty must unity against those who condemn us to barbarism. Only by uniting the forces of all the oppressed under the banner of international socialism, beyond national borders, religions, skin colour and language, can we end with the horror and disasters which capitalism means for the majority of humanity.