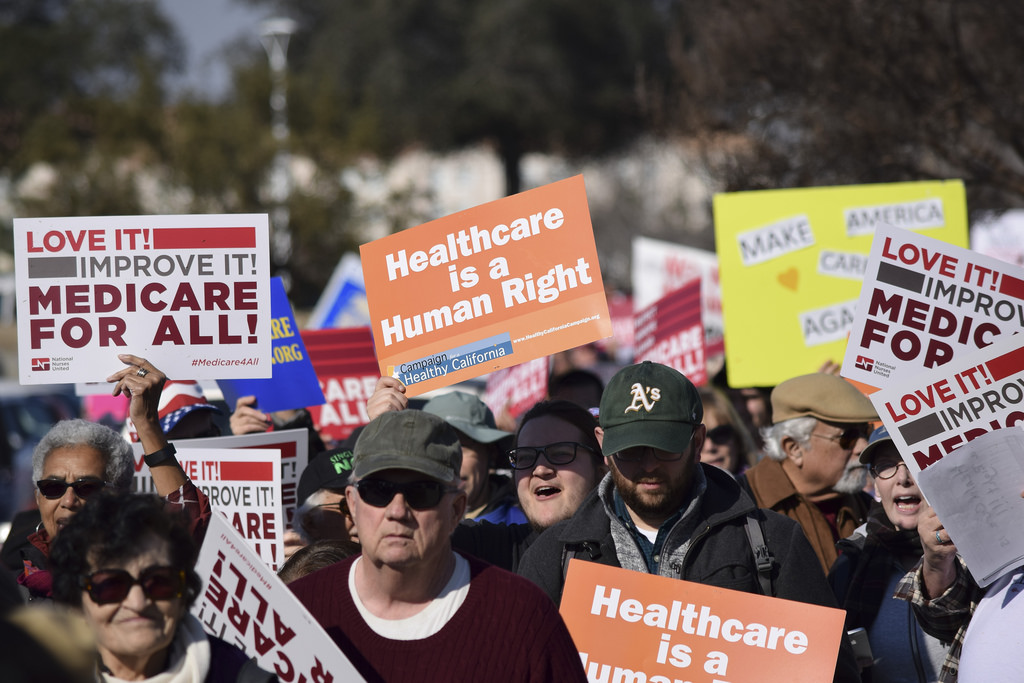 This past week witnessed the second spectacular collapse of the Senate Republicans’ plan to repeal and replace Obamacare. Its death was followed swiftly by the President’s command to resuscitate the limp corpse and for legislators to keep working through the scheduled August recess. Senators left Washington on Thursday promising a necessary procedural vote on health care legislation early next week, but without any indication of what they expected to vote on. Would it be a repeal-only or a reworked repeal-and-replace plan? Incredibly, it was revealed on Sunday that the latest plan is to bring the House bill—which even Trump denounced as “mean”—to the floor and let that be the basis for discussion and amendment in the Senate.

Republicans have unfortunately not faced mass protests against Trumpcare, which if organized by Democrats and broader forces could have led to its decisive defeat. But Republicans have faced sustained fury at town halls and their offices have been flooded with calls and emails. Bernie Sanders also contributed by organizing rallies recently in key states. But Democratic leaders, unions and other key progressive organizations should have done far more.

But we must recognize this phase of the fight is not over until “zombie Trumpcare” is finally laid to rest. In the coming days, every possible form of pressure must be applied to ensure that it’s buried for good.

Republicans Still Gunning to Transfer Billions to the Rich

It’s no surprise that in the midst of this vicious Republican assault, everyone’s now talking about healthcare. As the President famously noted, it’s complicated. The complexities are a direct reflection of the opposing interests inherent in for-profit health care industry: patients need care, corporations need profit. Health insurance and pharmaceutical companies are among the most generous political donors to candidates in both the Democrat and Republican parties. Patients, particularly working class and poor patients, are left without effective advocates in this debate.

Republicans see the public money that was supporting Obamacare and the Medicaid expansion—its most progressive feature—as rightfully theirs, and they intend to take it back in the form of tax cuts for the rich. A few Republicans, under pressure from their constituents, want to maintain some of the most popular aspects of Obamacare. Others reject, in principle, government playing any role in what they consider should be a private-only marketplace. This intra-party conflict has been an important part of the reason for the failure to get Trumpcare to the Senate floor for a vote.

But the other reason is that the word got out to tens of millions of people just how awful the effects of Trumpcare would be. The most recent polls show support for Senate Majority leader Mitch McConnell’s version of Trumpcare at 16%. No wonder given that the nonpartisan Congressional Budget Office estimated that McConnell’s second version would have meant 15 million losing health care next year, nearly $800 billion in cuts to Medicaid over 10 years and deductibles rising to $13,000 per year for single people by 2026. This would mean that the health care would be effectively unusable for low-income single people and that, in the CBO’s words, many “would not purchase any plan even if it had very low premiums.”

But even if working people win this phase of the battle by killing Trumpcare, programs like Medicaid, Planned Parenthood and the subsidies for private insurance purchased on the exchanges are not safe. Republicans have their sights set on that $800 billion and will find another path to it if they are ultimately unable to overcome their current internal divisions. The House leadership’s budget proposal for next year goes after Medicaid and incredibly includes the idea of privatizing Medicare. As the Young Turks network commented, after so far unsuccessfully going after the third most popular social program (Medicaid), the Republicans have decided to go after the second (Medicare).

The Democratic Party leadership contributed very little to Trumpcare’s current impasse. The Democrats see healthcare as a 2018 election issue and are quite content to let the Republicans make a mess of it. While the record breaking number of Democrats who’ve signed on to John Conyers’ single-payer legislation this session reflects the huge pressure from below, they have also signed on knowing it will never pass in the Republican-dominated House and they will not have to answer to their corporate donors for their actions.

Millions of Americans understand health care is a pressing, concrete issue. Back where policy meets human reality, more than a thousand people waited in line at an annual event offering free medical and dental treatment at a Virginia fairgrounds on Friday.

The net effect of the Republicans’ brutal repeal-and-replace effort on the consciousness of working class and middle class people is to make Obamacare more popular (it now has over 50% support) but even more so to massively increase support for universal government-guaranteed health care. According to a Pew survey earlier this year 60% overall believe the federal government should be responsible for ensuring that all Americans have health coverage. Even among Republicans there is a huge shift with 52% of Republican voters making less than $30,000 a year now agreeing with this idea, up from 31% the year before! (New York Times, 7/21/17)

Medicaid which used to be stigmatized is now widely accepted as a good thing. The state exchanges are a different matter. For many they have meant insanely complicated paperwork, high deductibles  and increasing premiums. Americans in the exchanges don’t want to lose the healthcare they have gained but at the same time they have found it wanting. People are increasingly drawing the conclusion that the insurance companies are the problem, not the solution.

Bernie Sanders’ primary campaign did a lot to popularize the idea of Medicare for All, but he has yet to build an effective coalition to actually make it reality. Leaders in the Democratic Party like Nancy Pelosi and Chuck Schumer have recently reiterated their strong opposition to Medicare for All. Likewise, the leadership of Planned Parenthood released a statement supporting the California Assembly Speaker Anthony Rendon, a Democrat who criminally blocked a wildly popular statewide single-payer plan from becoming law in that state.

National Nurses United and some smaller statewide nurses unions have been the lone working class organizations advocating uncompromisingly for single payer. They and their allies could form the nucleus of well-organized and serious statewide single-payer movements across the country. With the correct tactics, methods and strategy, these movements could make the most of this watershed moment and win real, lasting gains for working class and poor people. Critically, these campaigns must be absolutely independent of corporate cash, especially contributions from the health insurance industry, which will be fiercely determined to either fight off or buy off any effective movement.

Now is the time to organize an historic campaign for an improved Medicare for All, without regard to income, employment or legal status. This struggle could become the first step in a larger effort to build a new party to represent the interests of working people and fight to win Bernie Sanders’ platform: a $15 an hour minimum wage, an end to racist policing, a green jobs program, free college, retirement with dignity, and taxes on the billionaires to pay for it all.

Marty Harrison is a Socialist Alternative member, Registered Nurse in Philadelphia, and member of PASNAP

Iran: A New Period Opening Up

ABOUT US
Socialist Alternative is a national organization fighting in our workplaces, communities, and campuses against the exploitation and injustices people face every day. We are community activists fighting against budget cuts in public services; we are activists campaigning for a $15 an hour minimum wage and fighting, democratic unions; we are people of all colors speaking out against racism and attacks on immigrants, students organizing against tuition hikes and war, women and men fighting sexism and homophobia.
Contact us: info@socialistalternative.org
FOLLOW US
© Socialist Alternative 2019 | All rights reserved
89 Shares
Tweet
Share89