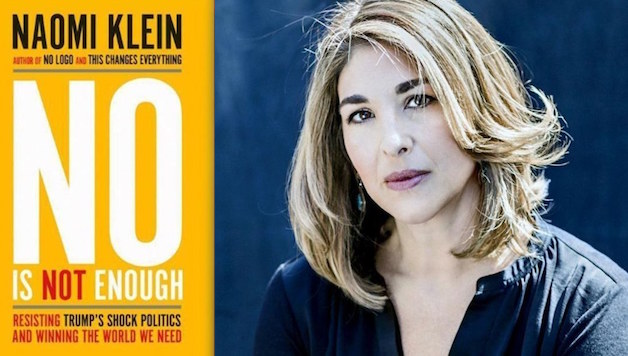 No Is Not Enough:
Resisting Trump’s Shock Politics and Winning the World We Need
By Naomi Klein
Published by Haymarket Books (2017), $16.95

“[Trump is] the personification of the merger of humans and corporations – a one-man megabrand, whose wife and children are spin-off brands… He is the embodiment of the belief that money and power provide license to impose one’s will on others, whether that entitlement is expressed by grabbing women or grabbing the finite resources from a planet on the cusp of catastrophic warming.”

Naomi Klein’s incisive ability to speak truth to power is precisely why she’s one of the most popular contemporary left-wing authors and commentators in the world. No Is Not Enough was written in a short time-frame – during the first five months of 2017 – to comment on Trump’s presidency and contribute to a discussion on how to challenge him and all he represents. The book in many ways sums up the central arguments of her other books; No Logo, her 1999 bestseller, bible of the anti-globalisation movement, The Shock Doctrine, her 2007 timely expose of a neoliberal capitalism, and her strong 2016 offering, This Changes Everything, that not only connected climate chaos with the capitalist market, but also made the case that the only solution must come from beyond it.

No Is Not Enough makes the argument that Trump’s presidency is “a naked corporate takeover” that is “many decades in the making”. Klein correctly makes the point that poverty and inequality got worse under Obama. She singles out two men who she criticises liberals for lauding, Bill Clinton and Bill Gates, for being part of the neoliberal shift that has culminated in Trump. She ascribes the brilliant descriptor, “philanthrocapitalism” to the Clinton and Gates “foundations”, reminding us that in the 1990s Bill Gates widely had a reputation as a dodgy dealer with questionable employment practices before successfully rebranding as a some capitalist good-guy with a diamond encrusted superhero cape. Klein recognises that Hillary Clinton’s brand of “trickle-down Identity politics”, as she puts it, was incapable of galvanising voters who were rejecting establishment politics in their droves, paving the way for Trump’s victory

The book is a wealth of useful insight into the nature of the Trump regime. For example, Mike Pence had a direct hand in the racist gentrification of New Orleans post-Hurricane Katrina and ensuring that New Orleans within a few years had one of the most privatised school systems in the world. When Trump’s Secretary of State, Rex Tillerson was CEO of ExxonMobil. He oversaw projects that researched how the company could profit from future climate catastrophe, while all the while funding fake science projects to throw question marks over the reality of climate change.

Klein gives an anecdote from 1976 to illustrate the parasitic calibre of the ‘born-with-a-silver-spoon’, Donald Trump. At a time of a fiscal crisis for New York City in 1976, he managed to purchase prime real estate for $9.5million, sold it back to the city for a song with punitive conditions. It was leased it back with tax breaks for Trump that by 2016 had cost the city $360 million. In 1989 in the same city, Trump took out full-page ads in several daily newspapers calling for the reinstatement of the death penalty after five black and Latino men were accused of raping a white woman. DNA evidence latterly exonerated the Central Park Five. Corporate shill Trump’s real rise to stardom came through trashy TV shows on corporate channels like The Apprentice – a nasty glorification of individualism and competition between people that derived its ‘humour’ at laughing at people’s failures and fostering a ‘greed is good’ mentality, as well as the cultural vacuity of WWE (World Wrestling Entertainment).

Klein sees Trump as an escalation of the neoliberal shift in capitalism evident now for decades. While, ironically, Trump in his election campaign railed in a populist manner against US manufacturing companies shifting their production overseas, and has attacked free trade deals – a central tenet of the neoliberal agenda of the capitalist establishment – the hollowness of this is exposed by Klein. Trump himself aggressively outsourced in his own business life whenever he could and has shifted more and more of his business interests into real estate, reflecting the super-parasitic neoliberal shift in capitalism itself in recent decades. The man he appointed to oversee trade talks, Wilbur Ross, is a former banker who personally made billions from taking over firms to restructure them (laying off workers and shifting aspects of the business to cheaper locations abroad). It’s Klein’s view that Trump’s populist withdrawal from the Trans-Pacific Partnership will be addressed by lobbing on new aspects to NAFTA.

In No Is Not Enough Klein continues her searing critique of neo-liberalism , as begun in The Shock Doctrine a decade ago. She speaks the truth when she says “Neo-liberalism is an extreme form of capitalism that started to become dominant in the 1980s, under Ronald Reagan and Margaret Thatcher, but since the 1990s has been the reigning ideology of the world’s elite, regardless of partisan affiliation.” Aspects of neo-liberalism include the removal of all barriers to making a profit, including privatisation of public services, pursuit of profit through the expansion of finance capital, shifting manufacturing to the neo-colonial world where wages are deeply depressed etc.

How prevalent neo-liberalism has become – it in reality both caused the global economic crisis of 2008, but also was the ‘solution’ imposed – means that neoliberal capitalism, rather than an aberration, is more a reflection of the deeply depraved system of capitalism at this phase of its destructive history. We can do a disservice to those looking for solutions to draw a distinction between neo-liberalism and the system of capitalism itself – we need an anti-capitalist struggle to end the onslaught on our living standards that is taking place in the ruthless drive for profit.

Klein makes some interesting points about the fightback she wishes to see. She derives huge hope from the Sanders’s movement that was such a shock to the political establishment in 2016 and illustrated the deep-seated popularity of left-wing ideas like universal healthcare, free education, and a living wage. She correctly makes the point that any popular, left-wing movement and political force must both challenge wealth inequality and the economic status quo, and also link this with a programme that has a specific goal and also vision to challenge sexism, racism and all forms of oppression. In doing so Klein makes the call for ‘intersectionality’ in movements. While undoubtedly in this context, and crucially for the masses of young people seeking to build a better world who ascribe to intersectionality, this means ensuring that all injustice and inequality is challenged, and that anti-racism, anti-sexism etc. are indelibly ingrained in all movements – something absolutely vital – the word is often bandied about as a cover for yet more liberal offerings up of a milder version of the unacceptable status quo. The call for an implacable anti-capitalism intertwined with anti-sexism and anti-racism is the strongest way to underpin any movement for change, in my view.

Klein also makes a positive point, implicit in the title of her book, that we need to go beyond single-issue struggles, that many revolts of the past were guided. It’s interesting that such a bestselling author is making this point – that a programme, not only against the capitalist status quo, but for a new society is both necessary and also strengthens movements for change.

This leads onto the weakest aspect of No Is Not Enough – the programme for change advocated. Unfortunately, for a book and author that’s so incredibly sharp at critiquing the status quo, at critiquing the whole capitalist system, the solutions proffered are underwhelming. Though there’s lots of positives one would fully agree with, the programme advocated is firmly rooted in tweaking the capitalist status quo, in working around the corporate domination of states and our world, rather than directly challenging it. Demands like the breaking up of the banks and the establishing of community-led energy projects, while infinitely better than the status quo, do not get to the heart of the problem.

The corporate elite that are threatening the future of our beautiful planet need to be disempowered; their extreme and obscene wealth seized, and the key levers of the economy need to be brought into democratic public ownership by a movement from below of working class people and all the oppressed, so that the needs of people and the planet can finally be catered to.

ABOUT US
Socialist Alternative is a national organization fighting in our workplaces, communities, and campuses against the exploitation and injustices people face every day. We are community activists fighting against budget cuts in public services; we are activists campaigning for a $15 an hour minimum wage and fighting, democratic unions; we are people of all colors speaking out against racism and attacks on immigrants, students organizing against tuition hikes and war, women and men fighting sexism and homophobia.
Contact us: info@socialistalternative.org
FOLLOW US
© Socialist Alternative 2019 | All rights reserved
18 Shares
Tweet
Share18