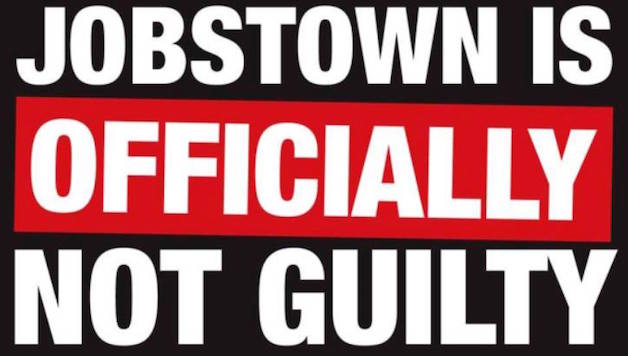 Despite their disingenuous protestations that the charges and trial were a by-product of an independent process carried out by the Director of Public Prosecutions (DPP), this is clearly the verdict that they did not want or seek. It is a stunning blow to them, the Gardaí (police) and the state who, loyally egged on by the capitalist media, orchestrated the trial of seven defendants on trumped up charges of false imprisonment of then Tánaiste Joan Burton and her assistant Karen O’Connell on 15 November 2014.

On this day, a peaceful anti-water charges protest took place in the deprived working class community of Jobstown in West Tallaght, against the visit of Joan Burton to the area. During the protest her car was impeded over the course of two hours as protesters sat down in front of it.

This protest was not an isolated one; protests such as these were taking place across the state. The anti-water charges movement had exploded from below in the Autumn of 2014 reflecting the seething discontent against the imposition of a diet of austerity on working class people since 2008. Added to this was the sense of disgust against the Labour Party, which having shamelessly lied to win the trappings power in February 2011, were now dutifully implementing this programme of cuts to public services, austerity taxes and the bailout of the banks.

The blow delivered to the ruling class by the outcome of the trial is one that is being keenly felt, coming as it does only months after the abolition of water charges for normal usage. Nowhere is this more apparent than in the than in the print media, particularly the pages of Ireland’s supposed “paper of record” the Irish Times. The day after the verdict it spitefully ran with the headline of its front page with a story dealing with the sending of two tweets by Paul Murphy towards the end of the trial, as opposed to mentioning the obvious fact that Paul and five others were acquitted unanimously by a jury of their peers. This is linked with their general disgust at the use of social media campaign by supporters of the Jobstown defendants to bring out the facts of the trial. Their editorial ran with the headline “Jobstown acquittals: jury trials under strain”.

Their argument is that the use of social media will inevitably influence the outcome a trial. They are conveniently ignoring how the vicious lies and propaganda by the capitalist establishment against the people of Jobstown over the last two and a half years had helped shape a bias against the protesters, particularly amongst sections of the middle class. Solidarity – the Left alternative in which the Socialist Party participates, and the #JobstownNotGuilty campaign effectively used social media, along with an active campaign in the run up to the trial, to bring out what really happened on the protest and the political motivation that lay behind this trial.

The Irish Times and their ilk would like us to forget about the real outrage of the Jobstown trial; the fact that a succession of Gardaí lied in their statements and under oath on the witness stand. These include a Garda Superintendent and Inspector (the two most senior Gardaí at the protest) who claimed they heard Paul Murphy say to the assembled crowd “Will we keep her [Joan Burton] here all night?”. The fact that a number of Gardaí would lie about hearing words that were never uttered by Paul as was shown by video evidence shown in the court, clearly illustrates that there was attempt by senior echelons of the state to pervert course of justice.

The media have mocked the suggestion that a conspiracy took place to bring about a conviction against the Jobstown protesters. However actions such as those outlined above prove otherwise. Solidarity and the Socialist Party are demanding that a full independent inquiry be established to investigate how the Jobstown prosecutions were brought about. All the charges against the remaining 11 Jobstown defendants should be dropped and the conviction of the 17 year old in the Children’s Court on charges of false imprisonment should be overturned immediately.

Following the protest Southern Ireland’s ruling class went on the attack against the people of Jobstown, the Anti-Austerity Alliance (AAA- as Solidarity was then called) and the Socialist Party and its public representatives. This has involved a scurrilous campaign of smear, lies, intimidation and arrests.

In the week after the protest the present Taoiseach (Prime Minister) Leo Varadker, described it as one “designed to intimidate the Tanáiste [Burton]”, that Paul Murphy had “broken the law” and attacked “the thuggery” at the protest. The then Taoiseach Enda Kenny said in the same week that Burton had been “effectively kidnapped” by the protesters and the day of the protest itself Labour TD and Government Minister Alex White said that what took place was the “false imprisonment” of Burton. Fine Gael TD Noel Coonan, said that the protest showed that Ireland now faced “a potential ISIS situation”! Treacherously, David Begg the then leader of the Irish Congress of Trade Unions (ICTU) claimed Joan Burton was “badly kicked and beaten” by the protesters.

The Daily Mail had splashed across it’s a front page a picture of Paul Murphy and Ruth Coppinger with the headline “ ‘Democrats’ Who Believe in Mob Rule” the following Saturday. This was just one example of the bile thrown at the people of Jobstown and socialist TDs in both the broadcast and print media. This campaign of lies and smear helped lay the basis for arrests and charges to take place in the near future.

The following February, a series of dawn raids took place, beginning with the homes of Paul Murphy and Solidarity councillors and Socialist Party members Kieran Mahon and Mick Murphy. On 12 August, the RTÉ’s Crime Correspondent broke the news that the protesters would be charged with false imprisonment based on leaks from the Gardaí, illustrating the close connections between the media and the state.

In the mean time, reflecting the political nature behind these arrests the AAA was denied a fundraising permit in Dublin South West by the Garda Chief Superintendent. This was done on the grounds that the money would be used to encourage “the commission of an unlawful act”. The existence of Operation Mizen, a Garda surveillance operation against anti-water charges protesters, including Paul Murphy, was also revealed around this time. Both clearly pointed to the political policing and the attack on the left and the working class movement that lay behind these arrests.

What lay behind the trial?

The arrest and trials of the Jobstown protesters are a travesty of justice. There were a number of factors that resulted in the different sections ruling class in pursuing this case. The then Fine Gael-Labour government wanted to seize an opportunity in the aftermath of the protest to attack and split the anti-water charges movement. The Gardaí wanted to use the arrests and charges to reassert their diminished authority during the anti-water charges movement when protest in working class communities had prevented Irish water from installing its water metres.

The emergence of the anti-water charges movement was seen as affront to the capitalist class in Ireland, working class people were supposed to passively accept the implementation of austerity measures. They wanted to use this trial to send a “chill factor” to anyone who stepped out of line and challenge the status quo.

Critically, they wanted to attack and undermine the AAA and the Socialist Party who played a decisive role in consistently advocating and building non-payment of the water charges, something Sinn Féin and the trade unions affiliated to the Right2Water campaign were not prepared to do. A guilty verdict combined with a prison sentence of more than six months or more would have unseated a socialist TD, Paul Murphy. The establishment are clearly worried about the growing influence of the socialist left, as shown by recent talk by Leo Varadker of cutting across the speaking time of smaller parties in the Dáil.

This is particular the case at a time of such economic, political and social instability for capitalism in Ireland and internationally. This has been shown by important strikes that have taken place in the last year amongst different sections of the working class and the burgeoning movement demanding abortion rights as shown by the mass protests on International Women’s Day, combined with growing support to separate church and state. There is a clear desire for meaningful and radical change on the part of workers, women, LGBTQ and young people.

The backward, neo-liberal and crisis ridden capitalist system we live in under is incapable of meeting such aspirations. Explosive clashes between the majority in society and the ruling class that wields power are inevitable and with this will come attempts to clampdown on our democratic right to protest and organise.

We need a mass socialist left

This is why last Thursday’s verdict was such a spectacular victory for the working class. It furthers undermine the authority of the Gardaí, the state institutions and the traditional capitalist parties and will serve to educate many about the rotten role of state in our society. The trial has coincided with important political developments across the water in Britain, which given its close proximity to Ireland will have an important impact. The breakthrough for Jeremy Corbyn and his ability to win support for a left programme will undoubtedly inspire many and the horrific fire in Grenfell has shown the criminal class injustice that lies at the heart of capitalism.

It has also coincided with the election of Leo Varadkar as Taoiseach, someone driven by a committed ideological hatred of the left and was able to win the leadership of his party by attacking and vilifying those on social welfare. The assumption to power of such individual along with the events surrounding this trial now poses the necessity for building an anti-capitalist, socialist left that will challenge the undemocratic, corrupt and rotten capitalist system he represents.