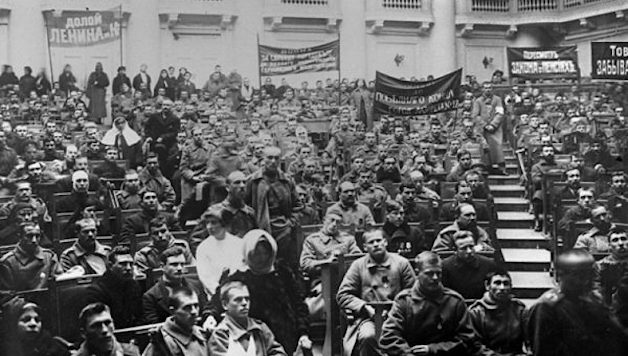 A century ago this week, 500,000 workers and soldiers marched through the Russian capital Petrograd, with tens of thousands joining marches in Moscow, Kiev and other cities. The demonstrations on 1 July (18 June according to Russia’s old calendar), called by the pro-government socialist parties who at that time held a majority in the soviets (elected workers’ and soldiers’ councils) marked an important new stage in the Russian Revolution.

Intended to show support for the capitalist Provisional Government the June demonstration did the opposite, showcasing its deepening unpopularity among the working class and militant sections of the army – the very forces that had made the February revolution which overthrew the dictatorship of the tsar.

The first All-Russian Congress of Soviets opened in Petrograd at the start of the month with a commanding pro-government majority. This however no longer reflected the real political mood in society. “The congress consisted for the most part of people who had registered as socialists in March but got tired of the revolution by June,” noted Leon Trotsky in his History of the Russian Revolution.

Soldiers enjoyed more generous representation than workers in the soviets, a fact that strengthened the more conservative forces especially in the earlier phase of the revolution. The shift to the left was far more pronounced within the factory committees and the working class, especially in Petrograd.

“Down with the Ten Capitalist Ministers”

The pro-government Mensheviks and Social Revolutionaries (SRs) gained a majority in the soviets after the fall of the tsar, when the political differences within the mass movement were not fully clear. They used the towering authority of the soviets to prop up a capitalist regime that was incapable of fulfilling society’s most basic needs.

In May 1917, the Provisional Government became a coalition with the induction alongside ten representatives of openly capitalist parties of six ‘socialist ministers’ from the Mensheviks and SRs. Lenin described this as an “alliance to stop the revolution”. His Bolshevik party conducted continuous agitation around the slogan “Down with the Ten Capitalist Ministers,” putting the responsibility onto the then soviet majority to break with the capitalists.

The soviet leaders claimed they were defending ‘revolutionary democracy’, a slogan the Bolsheviks mercilessly criticised for its lack of class content: Which class did the government serve?

This would be the crux of the political battle between the Bolshevik delegates at the Soviet Congress and its pro-government majority. The issue was brought into even sharper focus by the government’s plan under pressure from its imperialist allies to launch a new military offensive, shattering once and for all the myth that it stood for peace.

Lenin and the Bolsheviks would continue to “patiently explain” to the masses, to break their lingering illusions in the coalitionist parties currently dominating the soviets. Only a government of the soviets, breaking with capitalism and embarking on the socialist revolution, could safeguard the democratic gains of February and lead society out of crisis and war.

The first All-Russian Congress of Soviets took place in Petrograd from 16 June to 7 July (3 to 24 June according to the pre-1918 Julian calendar). In stark contrast to the unelected Provisional Government the Soviet Congress was as Isaac Deutscher pointed out, “the only national elected body then existing in Russia”. The 820 delegates from around Russia represented 20 million soviet electors.

At the congress, the left minority comprising the Bolsheviks and their allies wielded just under one fifth of the votes. This bloc included Trotsky, who was in full political solidarity with the Bolsheviks but not yet formally a member, and the Inter-District Organisation (Mezhraiontsy), which within a few weeks would follow Trotsky into the Bolshevik Party.

Despite a crushing majority at the congress the pro-government parties were uneasy. The Bolshevik-led minority took the political offensive on all issues. On the first day they pushed for a debate on the military offensive, the number one news event in Russia. The majority killed the proposal. The discussion would have been a formality, with preparations for the offensive already in motion, but this vote showed the extreme reluctance of the pro-government socialists to take responsibility for their policies.

On issue after issue the majority’s role was clear. Support for the 8-hour working day, unresolved since February, was voted down. The right of nations to self-determination was recognised but postponed to the future Constituent Assembly, which itself was continually postponed. The congress voted to ratify the coalition government by a four to one majority.

The left’s main political line of attack was the refusal of the soviet majority to form a purely socialist government in deference to a capitalist coalition that had almost no support among the masses. This was confirmed just days before the Soviet Congress in municipal elections that saw the Kadets – the biggest party in the coalition government – heavily defeated.

The idea for the June demonstration emerged from the sharp political struggles inside the Congress of Soviets. A demonstration called by the Bolsheviks for 23 June (10 June), opposing the military offensive and attacks on soldiers’ rights, to put pressure on the congress majority, met a furious reaction with representatives of the majority turning the congress proceedings into a virtual trial of Lenin and his comrades.

The congress passed a resolution banning all marches for a three-day period and threatened the Bolsheviks with expulsion from the congress if they ignored the ban. While the decision rankled and provoked sharp debates within its own ranks, the Bolshevik party decided that, tactically, they had little choice but to cancel the planned demonstration.

Tseretelli was no lone voice. “It is time to brand the Leninists as traitors and betrayers of the revolution,” demanded the Menshevik newspaper. Once again, the compromise ‘socialists’ were merely echoing the demands of the capitalists such as the Kadet leader Miliukov, who addressed a congress of the Cossacks at around the same time, telling them, “It’s time to make an end of these people [the Bolsheviks].”

Fearing the ban on the Bolshevik demonstration had further alienated workers and soldiers in Petrograd, however, the Mensheviks proposed the Soviet Congress organise its own demonstration one week later. They believed this would show they continued to enjoy mass support and cut across the growth of the Bolsheviks. It was a major miscalculation.

The official slogans for the demonstration were opportunist and evasive, stopping short of actually defending the government’s policies. They included vague concepts such as, “Universal Peace,” and “Democratic Republic,” as well as “Immediate Convocation of a Constituent Assembly,” which while correct in the abstract was being used to dodge the Bolshevik demand of “All Power to the Soviets!”

The demonstrators overwhelmingly chose other slogans. Almost entirely made up of workers and soldiers, without the middle-class layers seen on previous demonstrations, the crowd in Petrograd took the whole day to march past the podium where the soviet leaders stood and watched. It was an endless succession of banners bearing Bolshevik slogans: “Down with the Ten Capitalist Ministers,” “Down with the Offensive,” and “All Power to the Soviets!”

The demonstration “revealed the complete triumph of Bolshevism among the Petersburg [Petrograd] proletariat” wrote Gorky’s newspaper. “The sea of Bolshevik banners and placards was broken only occasionally by Congress [official] slogans,” noted the historian Alexander Rabinowitch.

The June demonstration was a thunderous wake-up call for the capitalists and pro-government socialist parties over the extent to which the masses had turned against them. But it also had a big effect on its own participants. “The masses saw that the Bolsheviks had become a power, and the vacillating were drawn to them,” said Trotsky.

From this point onward the government would resort to increasingly undemocratic and repressive measures in an attempt to block the growing influence of Bolshevik ideas among the masses.

The “Kerensky offensive” was launched on 1 July (18 June), with Russian forces attacking Austro-German positions in Galicia, nowadays part of Ukraine. Militarily, this wholly unrealistic plan aimed to relieve pressure on British and French forces on the Western Front until the Americans, who had entered the war two months earlier, could send reinforcements. Kerensky, the ‘socialist’ Minister of War, outwardly showing much greater optimism than most of his generals, hailed the start of the offensive as a “great triumph of the revolution”.

In reality its aims were wholly counter-revolutionary both in the realm of foreign policy (the resumption despite the government’s denials of a war for territorial annexations) and domestic policy (against the revolution, to re-establish a reliable capitalist state machine).

Kerensky and his close ally, Tseretelli, had worked on the plan in secrecy from their fellow ‘socialist’ ministers who then gave their rubber stamp, as did the pro-government majority in soviet. The Bolsheviks had taken this battle into the All-Russian Soviet Congress, tabling a motion on first day to press the meeting to, “immediately oppose this counter-revolutionary onslaught, or else frankly assume the whole responsibility for this policy.” The motion was voted down.

The offensive was a “monstrous adventure” to quote Trotsky, and would result in a new debacle for the Russian army with around 40,000 soldiers killed and 20,000 injured by the end of July. The outcome confirmed the Bolsheviks’ warnings that the Russian army, disorganised by a collapsing economy and with its morale shattered, was incapable of waging further warfare. 170,000 Russian soldiers deserted and left the front during the offensive.

Press censorship hid the full scale of the military disaster at first. The falsified reports offered some protection for the government during the ‘July Days’ (a mass armed demonstration in Petrograd demanding the soviets take power) and their aftermath, in which the Bolsheviks were falsely accused of attempting an uprising and viciously persecuted. As the failure of the offensive became public knowledge, Kerensky appointed the hardline general Kornilov as commander-in-chief who, within weeks, would make a genuine attempt to overthrow the government.

The aim of the offensive was to mobilise nationalistic support behind the Provisional Government and – crucially – to wrest back control over the army, curbing its rebellious ranks and restoring ‘discipline’.

The generals, representing tsarist reaction, were pressing for the disbandment of the Petrograd garrison and the removal of the most politicised pro-Bolshevik units to the front. They demanded the revision of ‘Order No. 1’, enacted immediately after the February revolution, under which all military units answered to the soviet rather than the government and high command. The strategy of the counter-revolution was to weaken and then strangle the soviets, but this was impossible unless the links between the soldiers and the soviets could be broken.

The launch of the offensive was accompanied by an intensified campaign against the Bolsheviks and their anti-war position. The capitalist media, echoed by the newspapers of the pro-government socialist parties, waged a vicious campaign to portray the Bolsheviks as tools of the German government.

This torrent of lies would overflow its banks after the ‘July Days’ with the Bolsheviks branded as “traitors” and Lenin in particular as a “German spy” – using as “proof” his train passage through Germany to reach Russia from exile in April. Even 100 years later this canard is still raised by bourgeois commentators as shown by a recent article in the New York Times by historian Sean McMeekin Was Lenin a German Agent?

Within months, as October approached, a growing section of the Russian capitalists would themselves be placing their hopes in the German armies – and a Russian military defeat – to put an end to the revolution and save them from the Bolshevik-led working class. The Bolsheviks’ firm and principled opposition to the war, and to Kerensky’s offensive, in the face of incredible pressure and slanders, would eventually tip the balance within the army overwhelmingly in their favour.

The masses shifted even more decisively behind the Bolsheviks with the realisation that continuing the war, the line of the government, meant stopping and rolling back the revolution. To stop the war, as the Bolsheviks explained, it was necessary to complete the revolution by overthrowing capitalism in Russia and internationally, starting with the transfer of power to a workers’ government based on the soviets.