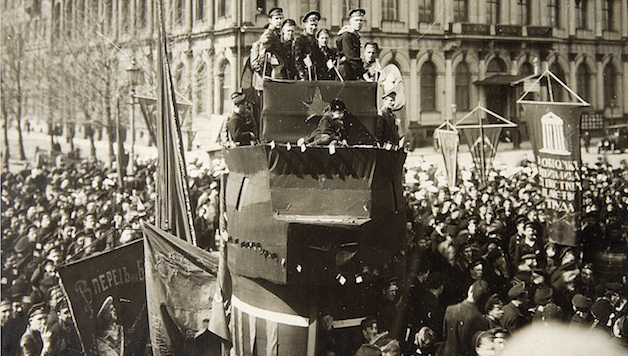 Caught in the Revolution: Petrograd 1917
By Helen Rappaport
Published by Hutchinson, 2016, £25
Reviewed by Niall Mulholland Helen Rappaport’s Caught in the Revolution provides many telling eyewitness reports from the then capital of Russia, Petrograd (as St Petersburg was renamed at the start of the first world war) in the revolutionary year of 1917. Most of the accounts come from the memoirs and letters of British, French and US ambassadors and other diplomatic staff, foreign businessmen, Red Cross workers, journalists, spies, bankers, volunteer nurses, maids and socialites.

While Rappaport provides vivid descriptions that add to a panoramic view of the momentous events, they are in the main hostile to the revolution, and to the Bolsheviks in particular. She does not hide her political bias. She dismisses John Reed’s classic book, Ten Days that Shook the World, as “over-hyped”. In contrast, Rappaport has empathy for the British ambassador, Sir George Buchanan, who did all he could to maintain the tsarist dictatorship and Russia’s role in the imperialist war and who, after the October revolution, called for allied armed intervention against the young socialist government. Rappaport refers to the “savagery” of the “mob” – the hungry masses who overthrew tsarism and made two heroic revolutions.

The author seems to be selective with her quotations, giving the impression that Arthur Ransome, a British reporter and later world-famous children’s writer, was hostile to the revolution. Yet Ransome went on to write sympathetic accounts of the Bolsheviks’ first years in power, when the young workers’ state fought to survive against enormous odds, including invading imperialist armies and a ruined economy.

Having said all that, Caught in the Revolution contains some nuggets. Rappaport discusses the run-up to February 1917, when revolution was in the air, as the war dragged on with huge Russian losses, and food shortages wracked the vast country. A volunteer British nurse described the desperate situation facing millions. An old peasant travelled “nearly a thousand miles” to see his son, a soldier, in a hospital ward for amputees. The distraught father asked: “Why hadn’t he died? They would have got a small pension for him – now look at him, a hopeless burden”.

Sub-zero temperatures affected fuel supplies to Petrograd. During the night, people “slunk in to the nearest cemetery” to “fill whole sacks with the wooden crosses from the graves of poor folks” to bring home for their fires. At the same time, the Romanov dynasty held lavish parties. “The glitter and pomp of a dying era”, wrote US ambassador Francis, who attended the tsar’s final social event. The tsar had no idea he was “standing on a volcano”.

The sacking of workers at the huge Putilov munitions factory led to a mass walkout on 18 February. This prepared the ground for the women’s marches on International Women’s Day which, in turn, sparked mass workers’ protests and strikes, paralysing the city. French resident Amelie de Nery noticed that “two years of war had hardened them [the 1917 protesters] far more than a century of tranquillity and peace could have done”. Even the notorious Cossack squadrons showed surprising restraint. The Times (London) journalist Robert Wilton reported protesters shouting: “You are not going to fire on us, brothers! We only want bread!” Later, Wilton wrote of a “fratricidal roar” as Cossacks turned their guns on the police who were firing on unarmed protesters.

Undoubtedly, reprisals took place in the aftermath of the defeat of the tsarist police by armed revolutionary workers and soldiers. Rappaport spends a great deal of time dwelling on these incidents, yet in a footnote concedes that not all bloodcurdling accounts were necessarily true. One of her star witnesses, photojournalist Donald Thompson, spoke about taking grisly pictures of “twenty two officers who had been killed” in a mutiny. Yet Rappaport qualifies this claim: “Here as in other instances where Thompson refers to specific photographs that he took at the time, the negatives – or even prints of them – do not seem to have survived”.

Edward Heald, who was sent to Russia to monitor the treatment of POWs, watched a great parade of people who seemed “joyous, freely, intensely, spiritually happy”. The air of celebration was bolstered by the news that the struggle in Moscow had been “an easy victory for the revolutionists”. The revolution saw crowds release political prisoners. “Two men and a woman… not old, all three were practically white-haired. They were political prisoners, and had been in close solitary confinement since 1905 [the year of the first, defeated revolution]”, commented William J Gibson, a Canadian in Petrograd.

A twelve-man Provisional Executive Committee was formed as a prelude to a new parliament, and soldiers and workers set about electing a Petrograd soviet (council) of workers’ and soldiers’ deputies. The confidence of the working class grew. Thompson complained that he found staff at the Astoria Hotel “beginning to get stuck up with this new-born freedom… You have to call them ‘comrade’ or ‘friend’…”

In moving passages, Rappaport records the mass funerals of those slain by police during the February revolution. Isaac Marcosson, an American journalist, observed: “One million had marched and wept that day… kept the peace without sign of authority”. But then she marshals her sources to revile Lenin. On the return from exile in April of the “fanatic” and “rabble-rousing” Bolshevik leader to Petrograd, Thompson “saw only one logical conclusion… The best thing for Russia to do is to kill Lenin”.

In contrast to Lenin’s principled revolutionary motives, Georgi Plekhanov, the veteran ‘father’ of Russian Marxism and Lenin’s “erstwhile colleague”, and Emmeline Pankhurst, the famous British suffragette leader, descended on the capital to preach class conciliation and a continuation of the imperialist war. Rappaport describes Lenin “launching into a tirade against the war as nothing but a ‘continuation of bourgeois politics’,” during the first all-Russia congress of soviets.

Despite the Bolsheviks’ minority position at the congress, Lenin was much more in tune with the working masses than Emmeline Pankhurst – not to be confused with her daughter, Sylvia, the socialist suffragette who helped found the Communist Party in Britain – who a contemporary described as having “no understanding or experience of the lives and mentality of the Russian working classes, especially of the women”.

Lenin’s call for all power to the soviets, with socialist policies and complete opposition to the pro-capitalist and pro-war Provisional Government – in which Mensheviks (right-wing social democrats) and Social Revolutionary party representatives participated – chimed more and more with workers. Leighton Rogers, a clerk at the Petrograd branch of an American bank, noted the growing power of the Bolshevik leaders: “This man Trotzky [sic] is the king of the agitators: he could stir up trouble in a cemetery”.

As support for the Bolsheviks grew, and the ruling class lost confidence in the Provisional Government, many foreign diplomats supported the August coup attempt by General Kornilov. Renowned campaigner for democratic rights, Pankhurst, asserted that the “only man who could ‘save the situation’ was Kornilov, who would ‘rule with an iron hand’.” As the revolution approached a climax, many wealthy foreigners and bourgeois reporters fled Russia, while socialist journalists and others more sympathetic to the revolution arrived in Petrograd. These included Bessie Beatty, Albert Rhys Williams, John Reed and Louise Byrant, who bore witness to “the new dawn of a world”.

“This morning we woke up to find the town in the hands of the B[olsheviks]”, wrote Rogers, referring to the overthrow of the discredited Provisional Government as revolutionary troops took control of the capital, with very few casualties. Kerensky’s government “succeeded in alienating everyone” and was an “object of ridicule”, according to Louis de Robien. Power was taken by the working class with the Bolsheviks at its head.

Caught in the Revolution finishes with an account of the initial measures taken by the Bolshevik government. These included the redistribution of land among the peasantry, the nationalisation of the state bank, and the takeover of foreign banks. Lenin declared the start of a world socialist revolution, the success of which, he emphasised, was a prerequisite to enable the building of a new socialist society in Russia. For all its political bias, the strength of Rappaport’s book lies in it conveying what it was like to live through the chaos and exhilaration of revolution.