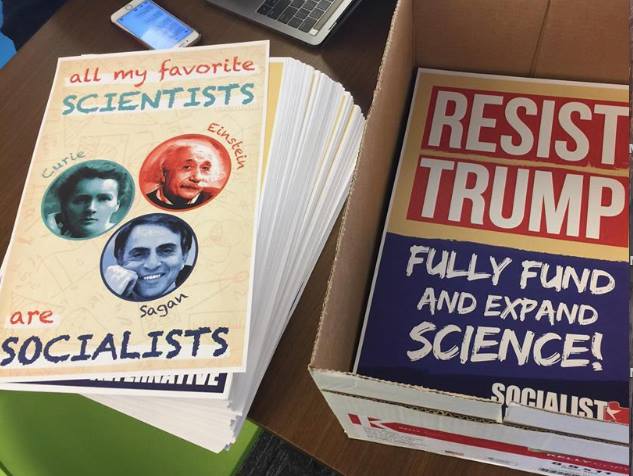 On April 22, Earth Day, the March for Science brought out hundreds of thousands of people, taking place in more than 600 cities in the US and around the world. For many who participated, these demonstrations represented a first step of the scientific community and supporters into mass action, in defense against Trump’s attacks on science and the environment. Speakers and participants demanded funding for the National Institute of Health and Environmental Protection Agency, while defending the clear scientific consensus on climate change that fossil-fuel usage is seriously damaging the planet. Some focused on the attacks on the scientific method itself and Trump’s use of “alternate facts,” which have been an ongoing feature since the election.

What follows are reports from marches in Arkansas and the Bay Area.

Tens of thousands descended on Market Street, San Francisco, to challenge the administration’s attack on science in what was the largest outpouring of protest since January’s mass Womens’ March.

Young post-doc workers, representing some of the unionized workers present, promoted their demands against gagging science and against federal funding cuts. Individual science workers with their families marched in their lab coats adorned with their protest messages. Clever homemade signs mocked climate deniers and a sea of science puns were abundant.

In marked contrast to the Womens’ March, a wing of corporate America also showed up. The science industry; biotech in particular, was out in force, mobilizing its employees to defend its specific interests. While the march was promoted as being non-partisan and non-political, establishment Democratic Party politicians dominated the opening rally’s stage, opportunistically and cautiously making jabs at Trump. Given the scale of the climate crisis they offered little substance to the crowd.

Socialist Alternative’s picket signs boldly arguing to Resist Trump and capitalism, were met with enthusiasm with about 400 of our signs circulating into the crowd. Our most popular sign, by far, featured the faces of Currie, Einstein, and Sagan, with the banner:, “All My Favorite Scientists . . . .Are Socialists!”

Socialism is coming back with a bang and many scientists are seeing the sanity of a socialist plan to save the planet.

The March for Science NWA took place in Fayetteville, Arkansas at 10 am this past Saturday morning. Despite the rain and area flash floods, approximately 500 people from the region came out to show their support for science. A number of attendees mentioned that it was their first protest, so hopefully they will continue to be involved in area protests. The march took a mile-long route to its destination. The original goal was the University of Arkansas outdoor Greek Theater, but had to be changed to a nearby indoor auditorium due to the downpour.  The marchers were enthusiastic, and chants broke out every few minutes or so.

Once inside the auditorium, a range of speakers addressed the crowd. The University of Arkansas Chancellor (a neuroscientist by training) talked about the importance of science education and the dangers of cutting funding for both science and the humanities. A number of other area scientists and science instructors spoke, as well – all were warmly received. The Fayetteville mayor closed out the list of speakers. The AFSCME union member delivered a fiery speech about the dangers of positions taken by the Trump administration and the Arkansas legislature. While he spoke, a crowd member shouted that the city should divest from fossil fuels, which received an enthusiastic ovation.

Northwest Arkansas Socialist Alternative brought several pickets and posters, all of which were eagerly grabbed up by the marchers. The strong and clear messages and demands on some of the pickets (e.g., “Tax the rich to fund green jobs,” “End gag orders,” etc.) resonated extremely well with the crowd, but the “All my favorite scientists were socialists” seemed to be most popular picket, as it was clear from the other handmade signs that Sagan, Einstein, and Curie were favorite scientists of many there.

Socialist Alternative members building for upcoming May 1 actions at the march were well received, with the big immigrant right’s protests fast approaching.