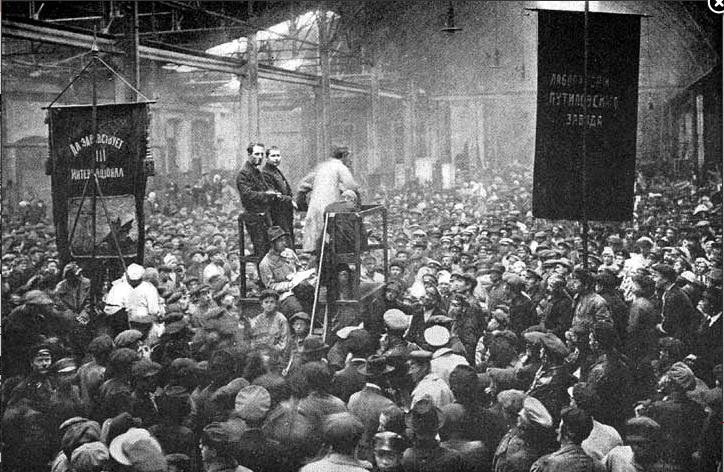 In 1905, a mass strike wave followed by a revolution took place in Russia. Workers began organizing themselves in strike committees. These organizations were discussing ways to win victories against the bosses and the Tsarist autocracy, helping the strikers with money and food, etc. However, very quickly these organizations found that serious political and inclusive structures were needed, they transformed themselves into councils (soviets) of workers. The councils gave workers the possibility to directly discuss and shape their day-to-day lives in the workplace and community.

The workplace Soviets elected deputies to town or city wide soviets which represented hundreds and thousands of workers. In that sense, they posed the question of an alternative form of government – one which relies on real working class democracy rather than institutions dominated by the landlords, prominent industrialists and the monarchy. The revolution of 1905 was crushed and with it the soviets but limited reforms of free speech, assembly, and a new parliament (Duma) were conceded by the Tsar.

During the World War I, many workers joined the socialist parties and growing opposition to the war.

Dual Power and The Bolshevik Revolution

In February 1917, the working class organized mass strikes and demonstrations, forcing the Tsar to abdicate. The main capitalist party, the Constitutional Democrats, known as the Cadets, joined forces with the SR’s and Mensheviks to establish a new provisional government. But as in 1905, the workers immediately began setting up soviets. These rapidly spread from the urban workplaces into the armed forces. All soviet elected representatives earned the average worker’s wage and were subject to immediate recall which made the soviets a far more accurate reflection of the shifts in popular opinion than a capitalist parliament.

The largest left parties; the Social-Revolutionaries and Mensheviks attempted to use the Soviets as an instrument to topple the Tsar. However, they refused to replace Tsarism with soviet democracy. Instead, they wanted to help the large capitalist parties establish a Western capitalist regime.

The Bolsheviks, still being a minority among the Soviets, rallied workers, soldiers, and peasants behind demands that they put on the government to expose their real goals. For example, they and only they called to end the war, an enormously popular demand. At the same time, they supported the peasants’ demand for redistribution of the land to show the inability of the majority parties to break away from capitalism and landlordism.

The question of redistribution of land to the peasants brought them to form soviets in the countryside and participate in the first All-Russian Congress of Soviets in June 1917.

The Provisional Government’s refusal to end Russia’s part in the war meant hundreds of thousands of further deaths in 1917.The new government lost its support among the majority of the workers. Under these conditions, the weak government was forced to give more authority to the soviets to run different aspects of society. Dual power emerged in Russia, forcing both sides to compete against each other for state power.

In April, Lenin proposed a new program for the Bolsheviks and the soviets – state power. Those in power were incapable of solving the most burning questions the workers, peasants, and soldiers faced. As the year continued, the Bolsheviks won a majority in the soviets. In October 1917, the Bolsheviks led the soviets to take power. The 2nd Congress of Soviets met during the revolution to ratify the taking of power by the working class, as well as proceeding immediately to end the war and distribute land to the peasants.

The civil war erupted 1918 with the revolt by Tsarist supporters backed up by 14 foreign armies. The soviets survived this challenge but the Stalinist counter-revolution which followed led to the bureaucratization of the Soviets and destroyed their democratic character. Nonetheless, the soviets did not end there. Often beginning as strike committees, these instruments of struggle and workers democracy emerged in every serious revolutionary movement of workers since, beginning in Germany in 1918.