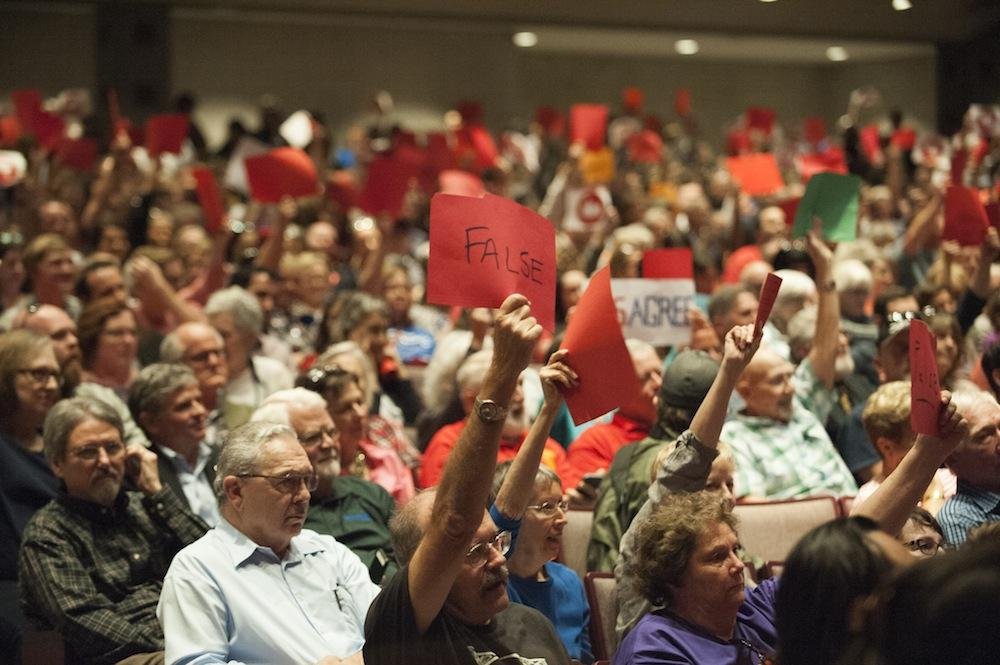 The defeat of Trumpcare has sparked a lot of discussion about how it was that Trump and Ryan’s “American Health Care Act” went so decisively down in flames. While there were a number of factors involved, the angry reactions by working people at town halls across the country were an important part of the story.

On a clear, warm Wednesday in the last week of February, junior Arkansas Senator Tom Cotton visited Springdale High School’s Pat Walker Theater for his first town hall in the region. The auditorium, which held 2,200 people, was at capacity. An additional 1,000 were rebuffed and stood vigil in an impromptu demonstration outside.  The vast majority of this crowd of ordinary people from Middle America were openly hostile to Senator Cotton and President Trump, and unconvinced of their healthcare “reforms.”

Springdale, characterized by poultry processing, manufacturing, and large Latino and Marshallese populations, is the working class heart of Northwest Arkansas, a relatively progressive area of the state anchored by the flagship University of Arkansas, 10 minutes south in Fayetteville. The progressive presence at the town hall had been called for and partly coordinated by Ozark Indivisible, a regional branch of the larger national Indivisible movement, but most in attendance were not directly affiliated with the group. Although Cotton had been in communication with Ozark Indivisible after changing the event’s venue almost half a dozen times, he and his staff still seemed surprised by the size and hostility of the crowd. Such an antagonistic reaction to a conservative Republican Senator in a state where Donald Trump won by an almost 27-point margin understandably garnered national attention.

During the question and answer section of the town hall, 25-year-old constituent Kati McFarland had one of the longest and most serious exchanges with the Senator from her seat on a rolling walker.  She pointedly asked Cotton about his plans for the replacement of the Affordable Care Act (Obamacare), which he has often stressed repealing. Cotton tried to move on without answering the question, leading the crowd to erupt in chants of “do your job!” Undeterred, the senator tried again to avoid answering, asking McFarland whether he should answer her question or move on to other opinions on the subject. McFarland replied, to a chorus of “answer hers” from the audience, “I think you should listen to them.” Cotton finally gave a vague, unspecific response, satisfying no one and setting a tone that would echo through most of that night.

McFarland is a member of Socialist Alternative. Her exchange with Senator Cotton has since appeared in coverage of Springdale’s town hall in numerous national sources; she has been interviewed on CNN (video), MSNBC, VICE, TIME, Vocative, Esquire, multiple local Fox and CBS affiliates, and others since.  She has been a central figure of this national media attention for good reason – she articulated the growing concern and anger millions of ordinary people felt about the looming attack on their access to healthcare. McFarland suffers from a genetic connective tissue disorder known as Ehlers–Danlos syndrome (EDS). EDS is a serious condition that is potentially life-threatening without medical care.

Cotton later said that the House bills repealing and replacing Obamacare (two bills together constituting the American Health Care Act or “Trumpcare”) would need major changes before they should pass the Senate and also urged Republicans not to move too quickly on repealing Obamacare. This change in stance by Cotton and others, as well as the recent defeat of Trumpcare altogether, likely had more than a little to do with these kinds of town hall reactions across the country. Resistance, therefore, can be effective even in a very conservative state with an exclusively Republican Congressional delegation.

Obamacare is of course far from perfect, as McFarland herself attests, having had to crowdfund (at youcaring.com/katiEDS) to cover the costs of insurance premiums and co-pays. Socialist Alternative, and McFarland, would much prefer a truly universal single-payer system or as Bernie Sanders puts it, “Medicare for all.” But the new plan with decreased mental health funding, 30% coverage gap surcharges, and other brutal cuts made to benefit the 1%, make it much more of a financial and psychological burden for the marginalized to simply exist. Being poor and anxious while ill, whether physically or mentally, is an indignity no American should bear. That legislators think burdening citizens with this indignity is a fitting replacement for the current system is an insult that will kill people.  Defending gains made under Obamacare is important for people like McFarland who depend on its protections for their access to healthcare. The national  debate sparked by town hall exchanges like that of McFarland with Cotton, along with Bernie Sanders’ mass healthcare rallies, demonstrates it’s possible, even in the current political environment, to defend Obamacare’s positive aspects while pushing toward a single-payer system.

Resistance is likely to be successful on many other issues as well. The angry confrontation with Senator Cotton was largely hostility redirected away from Donald Trump and his administration. Cotton faced chants of “tax returns” in addition to questions about Trump’s comments calling media “the enemy of the people”; the Senator was forced to try to distance himself from the increasingly unpopular president and his allegations about paid protestors. Cotton also faced tough criticism related to Trump’s racist and sexist rhetoric, much of which the Senator outright ignored, rather than attempting to defend the indefensible.

Even in deeply Republican states, the concerns of ordinary working people and their anger at pro-corporate policies shows that it will be possible – with an organized resistance and class-based approach -, to stand up against Trump’s attacks, and turn the South a different kind of red.