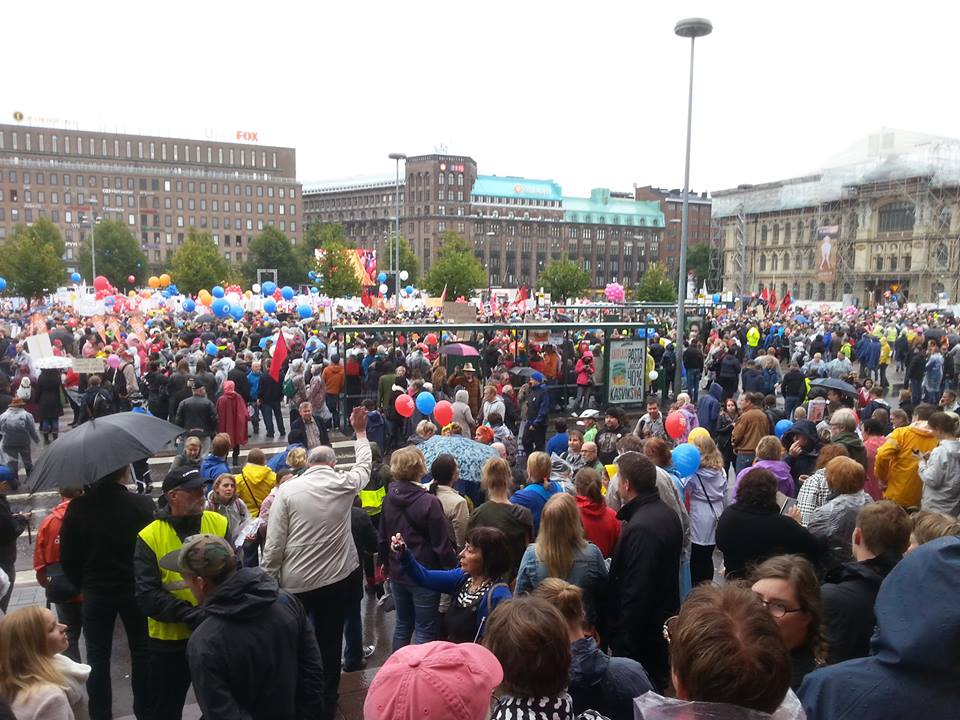 Around the world there is increasing interest in the idea of a universal basic income, that is, a regular payment made to everyone by the state, regardless of income or employment. The discussion is in part fueled by dramatic trends toward automation in industry and its impacts on labor under capitalism. In France, the Socialist Party presidential candidate, Benoît Hamon, calls for a basic income. Perhaps surprisingly to some, conservatives in many countries, including in Ontario and Scotland, are also examining basic income schemes. Here in Finland, a country with a large, wide-reaching and well-established welfare system, an experiment is underway to provide a basic income to a small population of unemployed people.

As in many countries, the basic income proposal in Finland is being put forward as an alternative to welfare spending. In other words, basic income payments are not being introduced as simply additional income for ordinary people, they are being used as avenue and justification for cuts to vital social services.

Socialists here in Finland oppose the proposed basic income on its current terms, as it would in the balance make many people and families worse off.

Let us look first at where this scheme has come from. A recent TeleSur article describes the Finnish government, led by Prime Minister Juha Sipilä, as “centrist” but this seems to be an unfortunate mistranslation. Sipilä’s political party is called “Keskuta” or the “Center Party” to be sure, but it is a right-wing, neoliberal party. In two years in power it has relentlessly pushed ahead with attacks on workers’ wages and massive cutbacks in funding to education. It has reintroduced tuition fees to what was a free education system. Sipilä himself, a multi-millionaire who has used his position to bully the press out of running negative stories about him and who is currently involved in two corruption scandals centered around his channeling public money to businesses owned by his own family, is more or less a Finnish Donald Trump. The Center Party is supported in government by the New Conservative Party, whose leaders openly praise the hated, arch-conservative British Prime Minister Margaret Thatcher and who took the lead in demanding the harshest possible terms be imposed on Greece during that country’s debt bailout negotiations. The third partner in Sipilä’s government is the Finns Party, a far-right anti-immigrant party with a fascist extreme-right wing, and whose elected representatives are regularly investigated and punished for violating hate-crime legislation. Any proposal from this three-headed ogre of a government should be regarded with the deepest skepticism.

And so to the proposal itself: under the government’s plan, being tested on 2,000 unemployed people selected at random by Finnish state insurance provider KELA, people receive less money. Recipients get a basic income of 560 euro, about $600, per month, regardless of a person’s circumstances. This income takes the place of existing benefits and is claimed by its advocates to have an advantage of reducing bureaucracy. However the current level of basic unemployment benefit in Finland is 697 euro ($742) a month, with a supplemental amount paid to help support children under 18. KELA’s own analysis determined last year that people earning under 2000 euro a month would universally be worse off under a model similar to the one being trialed. The experiment is itself rigged: while being tested on just the unemployed, the universal basic income if implemented would be universal.

Thus the Finnish Government’s experiment papers over how their “universal basic income” would lead to huge cuts in targeted public support for the most vulnerable. People on sick leave would lose most pay for time off from work. Child home care allowances would be slashed – single parents in particular would be punished. Targeted support for people at risk of becoming homeless could receive a 90% cutback. Under some models, students would lose access to study grants. The “universal basic income” system then would instead be a one-size-fits-all approach to social services, disregarding the particular needs of marginalized people in society.

How then can the government get away with promoting this attack on low-income workers? Like Ronald Reagan used “simplification” to sell a huge tax cut for the rich to the public, like Bill Clinton used “efficiency” to justify enormous cuts in public jobs and to destroy the welfare system, Sipilä’s cabinet argues that the basic income system’s main advantage would be reducing the paperwork required when a Finnish unemployed person takes on small or part-time jobs. Under the current system, a person receiving unemployment benefits can earn up to 300 euro a month without declaring it, but people earning more than this must go through a lengthy, frustrating bureaucratic process as their benefits are adjusted. In Sipilä’s vision, the basic income system would encourage unemployed people to take menial part-time jobs at rock-bottom wages or to sign zero-hour contracts.

Sipilä lives, not on planet Earth, but in the neoliberal fantasy world where a good job is always available for the taking, if only a person wants it enough. In reality, however, Finland’s unemployment rate remains stuck at the same 8% it has been since the Great Recession began. Finland’s economy is export-based, with mining, paper manufacturing and shipbuilding industries of this country of 4.5 million people all suffering from a general slowdown in world demand. Jobs appear and, more often, disappear based on the whirlings of stockbrokers in London and Frankfurt, New York and Tokyo, not out of some mythical laziness on the part of Finnish workers. The Finnish government has made no serious effort to create jobs and, through its “competitiveness pact” forced on the working class, created conditions which will make high unemployment a long-term problem.

What are the alternatives? The Left Alliance, a left-wing reformist party in Finland, is often credited with starting the dialogue about universal basic income in Finland. Their proposal, though, would have started from a higher basic amount and included additional allowances for special circumstances, along with making the income tax system more progressive. Even this proposal wouldn’t bring Finnish workers close enough to median income. While their scheme would not have raised all people above the poverty line, it contained steps forward instead of being a clear step back. Moreover, the Left Alliance has also put out a call for a 10 euro/hour minimum wage in Finland, which would nearly double the incomes of the poorest workers. These steps, taken together, would be progressive if incomplete.

A socialist approach to the problems of the Finnish working class would build the economy and create jobs through nationalizing and re-opening closed factories, and investing in sustainable energy and production – all things the Finnish government currently has the power, but refuses, to do. It would also ensure that children were guaranteed proper childcare and free education, that good-quality housing – in desperately short supply in parts of Finland – would be built in sufficient quantity to be available to all, and that those retiring or unable to work due to illness or disability would be able to live their lives to the fullest and be able to take up productive tasks to fit their skills. Demands like these can be taken up in the United States as well.

As socialists, we do not prefer a basic income strategy as the best tool to address unemployment or inequality. We fight to tax the rich and corporations to create good paying union jobs through an expansion of green infrastructure, mass transit and clean energy programs, and to fully fund public services. We fight for full employment, and call for a shorter workweek to share out the work, rather than acceptance of unemployment. We fight for higher wages, and Socialist Alternative in the U.S. has been a leader in the $15 minimum wage movement. Some of the discussion around social strategies to address automation in industry exposes the utter bankruptcy of capitalism, under which technology advances can be a threat to decent paying jobs and employment. Under socialism, advances in technology and automation could lead to radically shorter working hours, dramatically more time for cultural and personal enrichment, and a high standard of living for all in an environmentally sustainable manner.

Yet if a basic income was being introduced in Finland or elsewhere, without corresponding cuts to social services and as a net gain in income for working people, we would support that as an important step forward.

While the social welfare states of the Nordic countries, including Finland, can be admired from the position of people in the United States, they are not socialism but instead compromises within the framework of capitalism. As such, they are vulnerable to being undermined by capitalists. We should remember how the Finnish welfare state came to be: ninety-nine years ago, inspired by the Russian Revolution, the radical left in Finland, organized into a Marxist party, rose up against the capitalist class. While the Finnish Revolution was crushed by German military might, the Finnish working class has retained a tradition of organization and strong unions – and the Finnish capitalists have, until recently, maintained a healthy fear of the power of the workers.

There are far better reforms to look to in the Finnish welfare state for inspiration than this basic income plan. For example, any new mother in Finland is eligible for a package from the state containing baby clothing, bedding, bibs, baby hygiene items, condoms, and a first book – all delivered in a box designed to convert into a crib. This package was introduced in 1938 as part of a hugely successful campaign to reduce infant mortality. The Finnish primary education system meanwhile supports teachers to get high levels of training while eschewing standardized testing and competition between schools, and is consistently found to be the best primary education system on Earth.

But with the growing crisis of capitalism and the rightward shift of Europe’s traditional workers’ parties, the old postwar accommodation is fading, putting these advances under threat. Reforms can be defended and extended, and society still can and must be changed. While the particular circumstances of Finland and America differ the solution is much the same: build powerful mass movements, alongside new socialist parties and mass parties of the working class, and fight together, around the world, for the interests of workers everywhere. Americans can stop Trump and win health care and free education for all. Finns can win decent wages and a dignified basic level of living for all. Together, united across the borders of nations, we can change the world, and through organization and learning the lessons of history, we will.