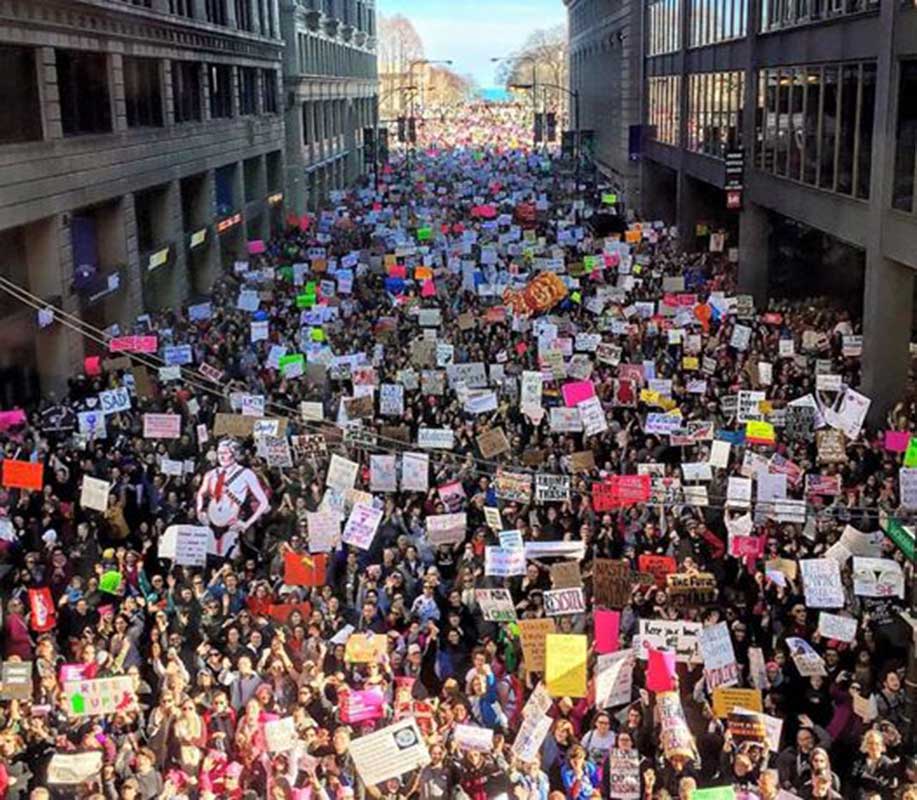 Next steps in the strategy to defeat Trump:
Be part of the protest on Women’s Day, March 8 and build for mass protests and strikes across the country on May 1.

Millions have marched and tens of thousands shut down airports. But Trump is not backing down. The time is ripe for an escalation of the resistance against Trump and his attacks on immigrants’, women’s, and workers’ rights.

The debate on how to escalate the fight back is also spreading within labor unions.

The board of directors of the nurses in Minnesota, MNA, “calls upon the NNU, [the National Nurses Union] the AFL-CIO and the wider labor movement to start an intense discussion about workplace education and information meetings and protest action on May Day, May 1, 2017, including a discussion within the AFL-CIO about a call for a nationwide strike that day.” [resolution text]

In Philadelphia, the nurses organized in TUHNA, just passed a resolution committing to “initiate a discussion within PASNAP,” their statewide union in Pennsylvania, “about the concrete steps necessary to build the resistance against the new administration’s rightwing agenda and to pivot that defensive struggle to an offensive one to win improved Medicare for All.”

The teachers union in Seattle, SEA, took it a step further and now call on the statewide and on the national teachers union, NEA, “to call upon their affiliates to go on a one day strike on May Day, May 1st 2017 should other labor unions put out the call for a strike that day.” [resolution text]

From People’s Power to Strike Action

The power of the people on the streets was felt by millions in the U.S. at the women’s marches. Students walked out of their classroom and went on strike against the threat of this dangerous right-wing administration. And, when Trump signed the Muslim travel ban, tens of thousands flocked to the airports and shut down business as usual. This was a first sign of mass, peaceful civil disobedience. The taxi drivers in New York City supported the protest with collective workplace action and boycotted the John F. Kennedy Airport for an hour. Uber tried to break the strike and “scab” by reducing their rates for airport rides, but this only provoked a #DeleteUber campaign. If you haven’t deleted you Uber app yet, delete your account to send a clear signal that we will not support companies who try to profit off breaking workers’ strike action.

But in the face of record-breaking, historic resistance and record-low poll numbers, Trump isn’t stepping back, he aims to speed up the attacks. Immigration Control Enforcement (ICE) raids have begun arresting and detaining immigrants, including those with legal work permits. Attacks on union rights with “right to work” (for less) or another legal challenge to unions like the Friedrichs case aimed to smash public sector unions via the Supreme Court are already in the pipeline. Reproductive Rights are under potentially the biggest attack in decades. Planned Parenthood faces an uphill battle to defend its funding and the anti-choice movement is already initiating legislation restricting abortion access at the state level. In addition, a new executive order by the president against Muslims traveling to the U.S. is in the making.

We cannot wait until the next election. We need to step up our protests now.

“The massive women’s marches of 21 January may mark the beginning of a new wave of militant feminist struggle,” wrote Angela Davis, Keeanga-Yamahtta Taylor, Nancy Fraser and others in The Guardian (February 6). “As a first step, we propose to help build an international strike against male violence and in defense of reproductive rights on 8 March.”

This call to action should be taken up and organized by the major women’s organizations and the labor movement. If Planned Parenthood, NARAL, NOW, and labor unions were to throw their weight into calling for a mass mobilization across the country, we could disrupt business as usual in a big way. Socialist Alternative calls on everybody to support this strike and participate in it where it is possible to do so without risking your job or other retaliation. We want the largest possible show of force, with the least amount of harm to ourselves. Our strength comes from our numbers. We can protect each other best by organizing this shutdown collectively at workplaces and schools, getting unions on board, and using individual sick days or vacation days if needed. This is a long battle and we are just starting to get organized. Let’s use this action to discuss how we can prepare for future actions that allow for full participation of all workers who want to fight back with strong support.

Prepare for One Day Strike on May Day

Unfortunately, time is running out to build for such a successful protest on March 8 without organizations like the AFL-CIO, bigger women’s organizations, or other organizations with the resources and ability to reach millions of people by taking it up and promoting it.

The millions in the streets on January 21 and mass civil disobedience in the days after demonstrate that people want to fight back. That these organizations have not put out the call with clear next steps that escalate the struggle shows that successful collective action will require pressure from below, from ordinary people, to move the more hesitant leaders into action.

The next possible date to prepare massive collective resistance is May Day, known and celebrated around the world as International Worker’s Day. For more than 100 years, this day is celebrated to remind the world of the Haymarket martyrs who were fighting for an 8-hour day, and to defend workers’ and unions’ rights. Since May Day 2006, when strike action for immigrant rights (“A day without an immigrant”) succeeded in pushing back attacks from the Bush administration, this day has been also linked to the struggle against racism and for immigrant rights.

This May Day can be turned into a first major rally of resistance by the unions against “right to work” (for less) legislation, to defend wages and working conditions, and to build the struggle for equal pay and equal rights for all workers, no matter of race, gender, sexuality, ethnicity, or immigration status.

Already nurses and teachers in labor unions are preparing the way. However, unfortunately, it’s not enough to call on the labor leaders to organize workplace action and use the power they undoubtedly have. The labor movement is about to receive a major blow and still too many conservative labor leaders believe they can try and collaborate with Trump rather than going all out to build resistance. Other union leaders hope to be saved in the 2018 or 2020 elections by the Democratic Party with all its Wall Street ties and dismal track record fighting for union rights. We cannot wait two years to defend ourselves and history shows us that labor unions will not be saved by anyone except the workers themselves.

To increase the pressure from below on labor leaders and use the power of activists in different movements, decentralized protests, workplace action, lunch break teach-ins, sickouts, citywide strike action, and student walkouts could be prepared for May Day, always linked to the call on the leaders of the labor movement, the women’s movement, and the environmental movement to use their power to connect and escalate these protests into a joint, powerful day of action.

If you can, move a motion in your union or activist group as the Seattle teachers did. Activists should not leave work on these days of protest if there is not strong enough support to avoid retaliation, but instead organize different protests – from handing out leaflets before work, a lunch break action, calling in sick, taking the day off, or more if possible – with the aim to overcome the hesitancy by most of the nationwide labor leaders.

Such a day of mass protest linked to significant strike action would be a big step towards even larger and more organized strikes. With Trump not backing down we will need to build towards citywide and even a national one-day general strike to shut down Trump’s agenda and defend workers’ rights and the right to live in dignity without racism, sexism, or fear of deportation.

If masses of working class people withhold their labor, it will hit the billionaire class where it hurts: their profits. This is the language that they understand. A one day strike all across the U.S. will not solve all of the problems we have with Trump and the billionaire class, but it will show the power of working people – not the least to the working class ourselves.

If you can move a motion in your trade union or any other activist group, we publish below two resolutions that can be used as a model. They were passed by the Board of Directors of the MNA (Minnesota Nurses Association) on February 15, and the Representatives Assembly of the Seattle Education Association (SEA) on February 13.

Whereas: The unanswered 40-year assault on the wages, benefits, conditions and union rights of the American working class has emboldened the right wing zealots around President Trump to launch a full frontal attack, introducing national right to work legislation and nominating Andrew Puzder as Secretary of Labor.

Whereas: The new administration’s oft-repeated pledge to repeal the ACA and cut Medicare and Medicaid threatens the immediate wellbeing of our patients, our neighbors and our families, the financial viability of our healthcare institutions and our own livelihoods.

Therefore be it resolved: The MNA calls upon the NNU, the AFL-CIO and the wider labor movement to start an intense discussion about workplace education and information meetings and protest action on May Day, May 1st 2017, including a discussion within the AFL-CIO about a call for a nationwide strike that day.

Accepted unanimously at the Representatives Assembly of the Seattle Educators Association (SEA), February 13, 2017:

WHEREAS national right-to-work legislation has been proposed in US Congress, threatening our union’s very existence, and

WHEREAS the WA state senate proposed an education budget that trades our union rights for a sub par increase in funding not nearly meeting the demands set forth by the McCleary decision, and

WHEREAS unions have been at the forefront of defending workers against corporate erosion of wages and benefits and a weakening of labor’s ability to stand up for workers’ rights comes with a concomitant loss of the community’s rights as well,

THEREFORE be it resolved that the SEA will propose in writing to the WEA and the NEA, that they call upon their affiliates to go on a one day strike in order to strengthen our ability to take a stand for both worker rights and the paramount needs of our students on May Day, May 1st, 2017 should other AFL-CIO labor unions put out a call for a strike that day or another deemed more appropriate by the labor movement,

THEREFORE be it further resolved that the SEA ask the WEA and NEA to notify all their affiliates in writing of this conditional call, and when the time comes prominently display the call on its websites.